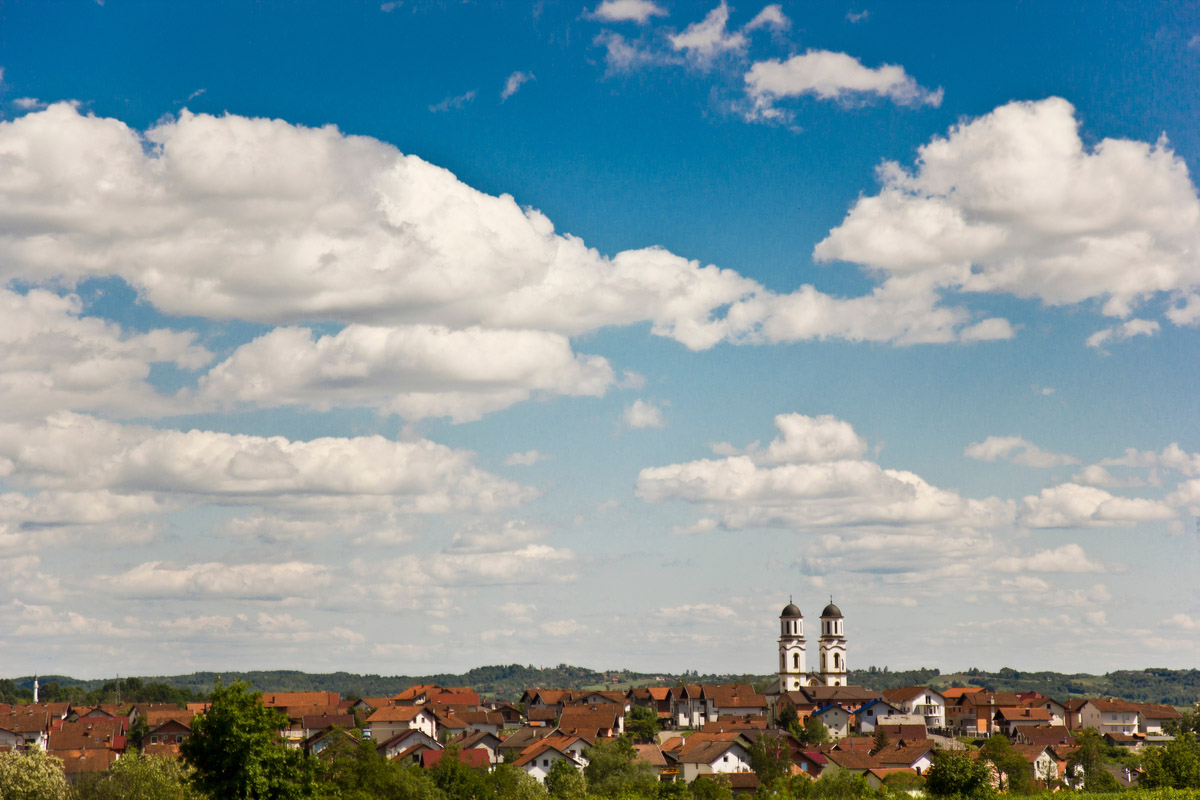 Story of the “Little Europe”

Nowadays, many media are depicting the Balkans as the place where people are migrating from. Tough historical circumstances in addition to economic struggles caused many people of working age to flee and left the Balkans to find a job in European Union. Most of them are ending their chase in the German-speaking world, Scandinavian countries, and recently in Ireland and Italy.

Not that long ago, at the very last stage of the 19th-century national groups of Czechs, Slovaks, Polish, Ukrainians, Austrians, and Italians were migrating towards the present, what is known as, West Balkans. Starting with 1878. Austro-Hungarian Monarchy received the mandate of the European superpowers to occupy Bosnia and Herzegovina indefinitely. 30 years afterwards, an official occupation was turned into real annexation and one historical process was brought to an end. To be more precise, what was de facto became de iure as well.

This introduction is needed for one reason, not to bother you with boring historic facts, but to understand what caused the tiny town of Prnjavor to become the one of most attractive places for settlers within mighty former Austria-Hungary. 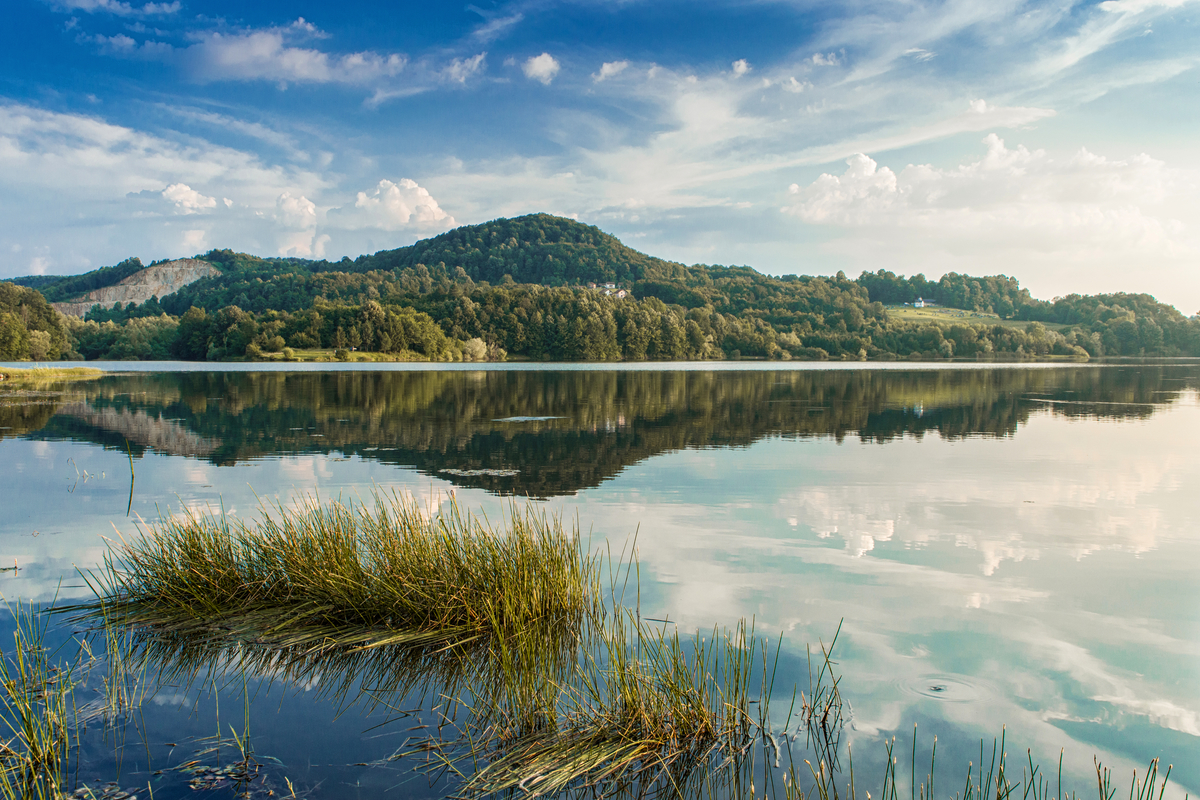 Calm and beautiful Drenova lake near Prnjavor, Bosnia and Herzegovina.

Region of northern Bosnia, the wider area of the Posavina region Sava river basin, misses harsh nature. The North Bosnia region misses a huge mountain massif, and together with flatlands close to the Sava river, we are only able to see hillocks. The area abounds with fertile arable land, therefore it used to be settled

Once in Prnjavor nowadays you’ll hear different greetings: “Budij zdravo”, “Buongiorno signore”, “Добрый день”. The first thought that will cross your mind would be you’re not the only tourists here. Instead of tourists from Czechia, Italy, or Ukraine, visitors will meet the locals whose ancestors migrated to Bosnia almost 150 years ago.

Back in 1882, the Italian town of Trento was hit by an earthquake, and life became impossible for the residents. Since back in that period, locals from Prnjavor and Trento were the citizens of the same state and held the same identity documents. Italian community from the earthquake-stricken Trento accepted a desirable offer and moved to North Bosnia. Cozy, Tuscan-like small village of Štivor became their home and recognizable trademark.

Italians didn’t bring only their language, customs, and culture to Bosnia, but also new agricultural sorts of grapevine and potato. Back in the pre-1992 period, Italians in Prnjavor numbered close to 300 residents and even had a local curriculum autonomy (learning Italian in addition to Bosnian). The unfortunate war period has shrunk the Štivor Italians to roughly 120 people today, mainly due to lack of job opportunities. Even though direct warfare combat avoided Prnjavor and its region, the turbulence of the war always shakes a wider area. 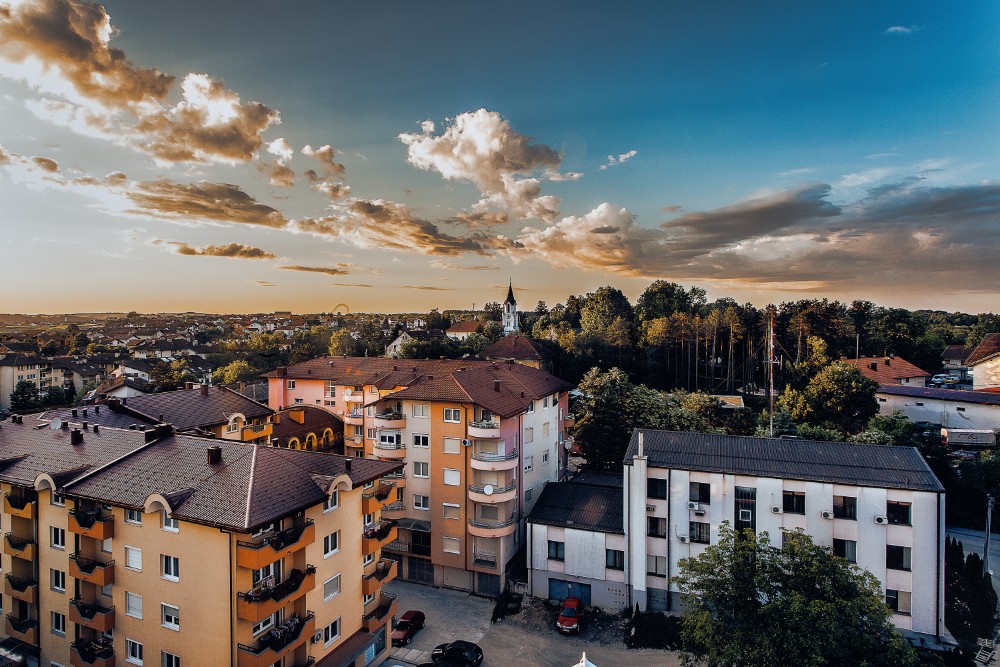 Prnjavor is the most recognizable and greatest trademark of nature of the Bosnian soul. 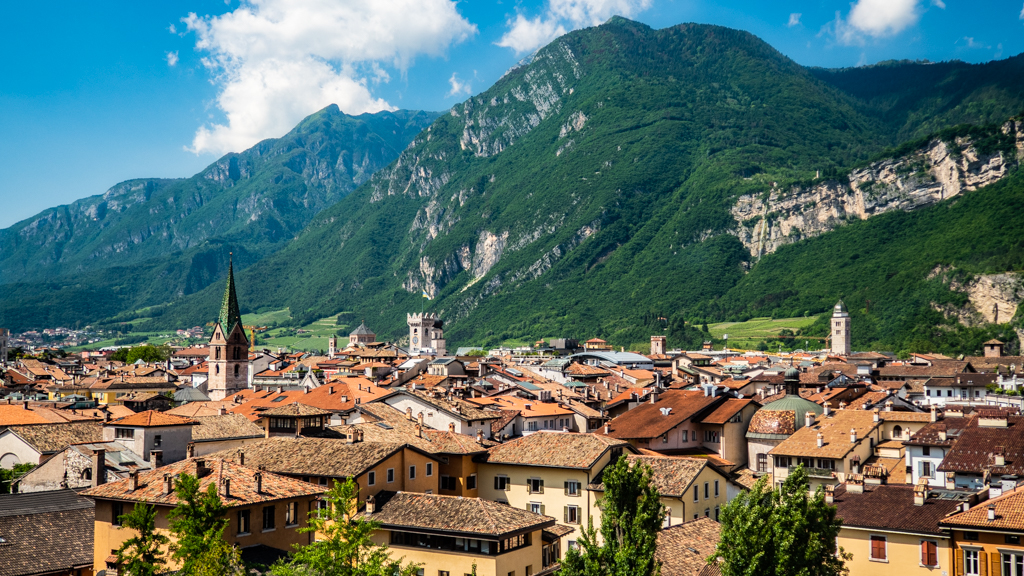 Italians in BiH originate from the Italian city of Trento, which is located in the valley of the Adige river. Photo credit https://almostginger.com/things-to-do-in-trento/

The Italian community is being organized through the cultural societies of “United families of Štivor” and the club “Trentino”. Amongst other activities, the Mardi Gras Carnival celebration is being recognized as the largest and most famous in the entire country. Nowadays Štivor holds a reputation as the place with the highest number of inter-religious marriages (we are avoiding the term “mixed marriages” on purpose).

Italian church sitting in the middle of the Štivor village went through turbulent historic circumstances. The one we can see today dates to 1979, and it is dedicated to St. John the Baptist. Apart from occasional mass service in the Italian language, a vivid fresco showing the Italian migration from Trento to Prnjavor decorates the church interior. It’s hard not to think about the absurdity of life and how geopolitical movements caused an opposite way of migrations in one century.

Back in the late 19th century, the infamous Galician poverty forced the Austro-Hungarian establishment to resolve the already raging issue. Since the Monarchy recently took control over Bosnia and Herzegovina as a “new territory”, Bosnian deserted villages with their arable and fertile land seemed like a decent alternative for Polish-Galician deeply impoverished peasants.

Broadly speaking, the settlement of Poles, Ukrainians (Greek-Catholics), Czechs, Slovaks, and Italians throughout Bosnia had a political mission. Serbian Orthodox Christian peasants were making a majority of all peasants in Bosnia. Being under the influence of the Serbian national movement, they represented a source of a possible threat for the Monarchy. Hence, settling a loyal, mainly Catholic, peasant class was notably important to strengthen the state influence in the Bosnian countryside.

We trace the Polish presence as of 1892, mainly in the area of North Bosnia and specifically around the town of Prnjavor. Amongst the peasant class, a certain number of Polish settlers were officers, doctors, engineers, and lawyers. They introduced a new homeland to use of chemical fertilizers, which were unknown before, and contributed Bosnian agriculture with industrial crops and developed beekeeping as well.

Speaking in numbers, according to 1910. census, roughly 11 thousand Poles lived in Bosnia. 20 years afterwards, their population tripled to 30 thousand. Prnjavor district abounded with the Polish population, compared to some other places in North Bosnia where they also lived. 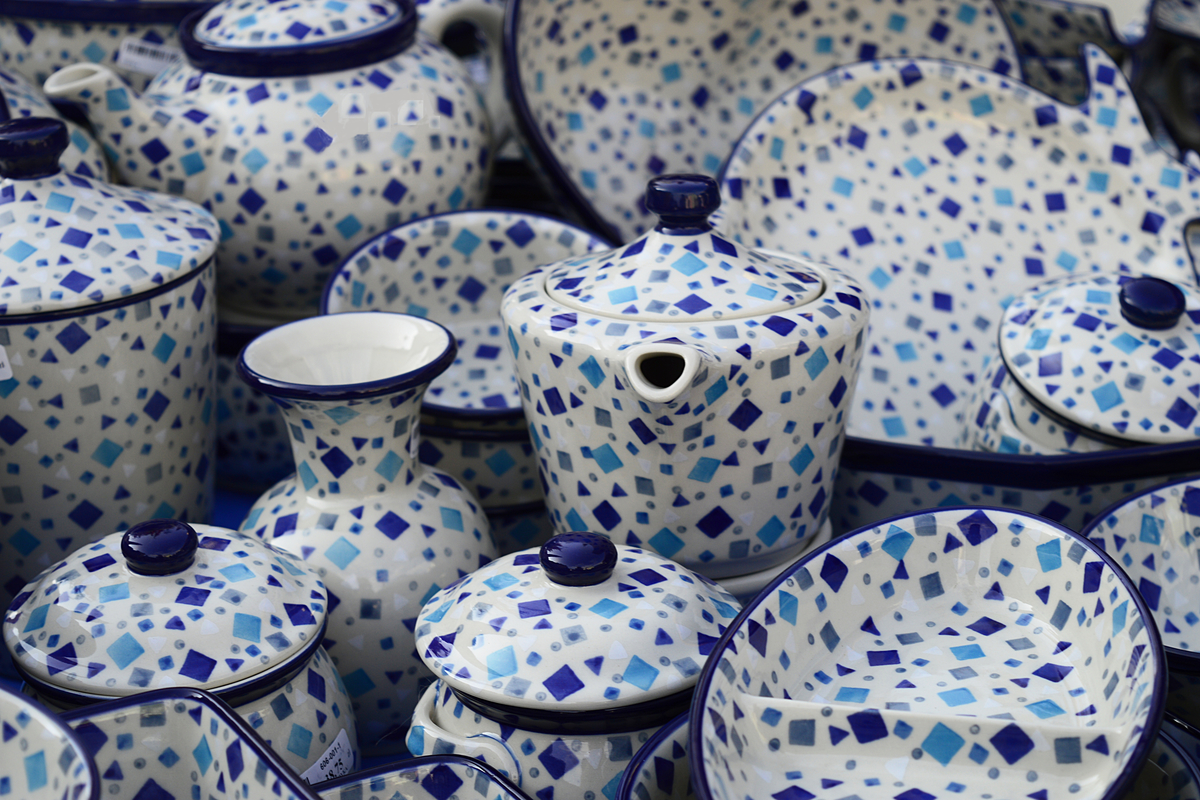 Products of the cultural organization "Bolesławiec" that preserve the Polish tradition.

In the aftermath of WWII. approximately 15 thousand Poles stayed in Bosnia. After the invitation of the Polish government to return to their homeland, they organized a conference where they opted to flee and come back. Repatriation of the Poles began in March 1946. and their representatives have chosen Bolesławiec district as their new home. Bolesławiec sits in the Silesia region, and it was widely deserted after ethnic Germans moved western from Neisse river Post-war Germany.

Nowadays, remaining Poles in Prnjavor, some 64 of them, are organized in the cultural organization of “Bolesławiec” which is very active in the promotion of Polish culture in general.

Czechs and Ukrainians - Two Stories of the Same Fate

Arrivals of the Czechs to the New homeland coincided with the aforementioned political moves of the central government. They were mostly craftsmen and tradespeople. Their specific skills in various crafts resulted in economic changes in the countryside. They brought to Bosnia the first iron plug and the first potato variety. Outstanding skills in blacksmithing helped them to settle quite fast and to make locals who were being thought there to speak Czech.

The fun fact is that the first bowling alley and windmill in Bosnia was a product of the Czech initiative. During the 1970s and 1980s, Bosnia was the only Yugoslav Federal Republic that learning the Czech language was legalized. In Prnjavor district Czechs are mostly organized in the suburban village of Maćino Brdo. Cultural preservation of Czech culture is organized through the activities of the “Česka beseda” association consisting of 60 persons. Folklore traditional dancing and the Mardi Gras Carnival celebration crosses the local borders and attracts the grouping of the Czechs from wider areas including Croatian Slavonia.

Ukrainians, most of whom are Greek-Catholics, fled to Bosnia due to similar reasons as Poles, lack of opportunities, and, most importantly, famine. Ukrainians were, same as today, the only members of the Greek-Catholic community in our country. In Prnjavor, their religious life is organized through the prepossessing church (built in 1912, rebuilt in 2000 after the war demolition) and neighboring spiritual center which keeps the rich library in the Ukrainian language. As of 2017. the Ukrainian language courses are offered to those interested.

Language learning is incorporated in the curriculum as well as the preservation of the culture through the “Taras Ševčenko” and “Zlatni klas” associations. 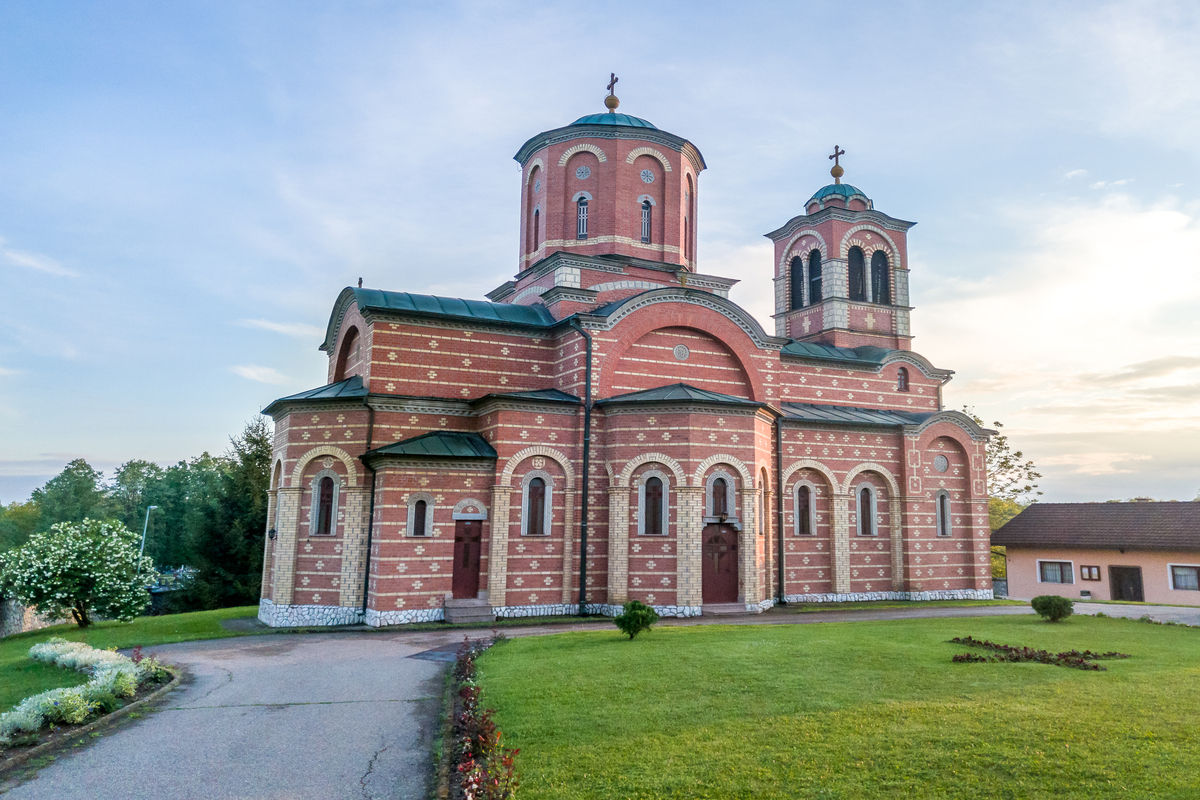 The church of St. Basil of Ostrog in the village Palackovci near Prnjavor, Republic of Srpska, Bosnia and Herzegovina.

As the conclusion to the story of the “Little Europe” Prnjavor can boast with the fact that 7 different religious buildings (different according to religion, denomination, and rite) exist within the municipality limits: