When you book with an account, you will be able to track your payment status, track the confirmation and you can also rate the tour after you finished the tour.
Sign Up
15210
3 Hours
Availability : Every Day
Min Age : 0 (suitable for anyone)
Max People : 15

Our Sarajevo Funky Free Walking Tour is carefully created to offer our guests a unique experience with maximum attention to every detail. Tour will focus on showing you the old part and city centre of Sarajevo in depth. We will cover all of the most important landmarks and Sarajevo’s complex history from the earliest times all the way to its modern periods.

Please note that this tour is not aimed to sell any other product of ours, but to offer amazing and unrivalled walking experience of Sarajevo.

Activity Note: We will wait for you at our office at 10 AM. Please note that it is recommended to make a booking or inform us of your arrival at least one day in advance. Our team always strives for giving the priority to quality over the quantity of each tour we do. In order to make sure to provide nothing less than a perfect experience we have limited the number of guests per tour but will go above and beyond to accommodate each of your requests.

As soon as we leave our starting point, our office at Besarina Čikma 5 in the heart of the old town of Sarajevo, first stop of the walk is Baščaršija square and its most interesting symbol, fountain, Sebilj.

Next stop is Kazandžiluk street and story of origins of copper and tin industry in Sarajevo.

Bravadžiluk street in 16th century used to be heart of production of locks and padlocks and that is how it got the name (brava = lock). Today however is home to some of the finest Bosnian food places – Ćevabdžinicas and Buregdžinicas.

We will continue towards Vijećnica (Sarajevo city hall) and walk over Šeher-ćehaja bridge with stories about Yellow and White Bastions including a photo stop at famous Inat Kuća (House of Spite).

In the very vicinity of Vijećnica, there is a Sarajevo Brewery which was founded on May 24th, 1864, and historians consider it to be the oldest industrial plant in Bosnia and Herzegovina and charming Franciscan monastery which is a “must” while learning about the city.

Next stop will be the oldest mosque in Sarajevo, Imperial mosque which will provide a unique  insight into traditions of Islam in Sarajevo and Bosnia and Herzegovina.

Just bridge further down the Miljacka river, we shall arrive to Atmejdan park, Latin bridge and assassination point of Franz Ferdinand where we will learn the inevitable story of the WWI.

After WII it is time for a bit older history and a stroll in Gazihusref-beys covered market-bazaar (Gazi Husref-beys bezistan) which was built in early 16th century for trading reasons still today serves the original purpose.

History of Jewish people in Sarajevo and visit to Jewish Synagogue is unmissable part of the tour. Once expelled from Spain in 1492 majority of Sephardic Jews settled regions of the Ottoman Empire, amongst which Sarajevo and Bosnia have hosted large numbers. 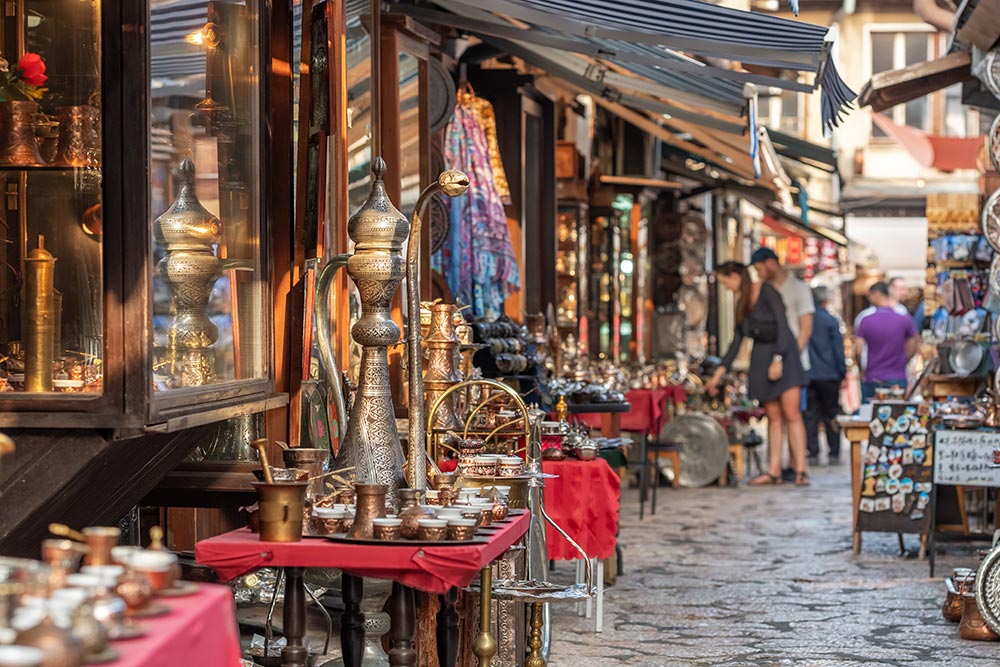 Next in line of religions who have dominated life and culture of Sarajevo, are Bosnian catholics, and next site on the visit is their greatest temple in Sarajevo and Bosnia and Herzegovina, Cathedral of Sacred Jesus Hearth.

Just at the square, if you look around, you will notice red stains on the ground. Those are the worldwide known Sarajevo Roses.

Couple of minutes away from pedestrian zone we will be welcomed by local farmers at green “Markale Pijaca“. Markale was on front page two times during the 1990ies, due to massacres that took place during the siege of Sarajevo. T

Few steps away will take us to the junction of Mula Mustafa Bašeskija, Titova and Ferhadija street where we we will make a short stop at the Eternal flame (Vječna vatra), favourite meeting place of locals which will give us a chance to soak up some good local atmosphere.

As we continue with the amazing European Jerusalem experience, our next stop will be just a perfect way to display the rich history of religious and cultural diversity that is simply breathtaking – The Orthodox Cathedral Church of the Nativity of the Theotokos.

Afterwards, we will admire the Hotel Europe which is both and hotel and historic building. Built and opened in the early days of what turned out to be a 40-year Austro-Hungarian occupation of Bosnia and Herzegovina. 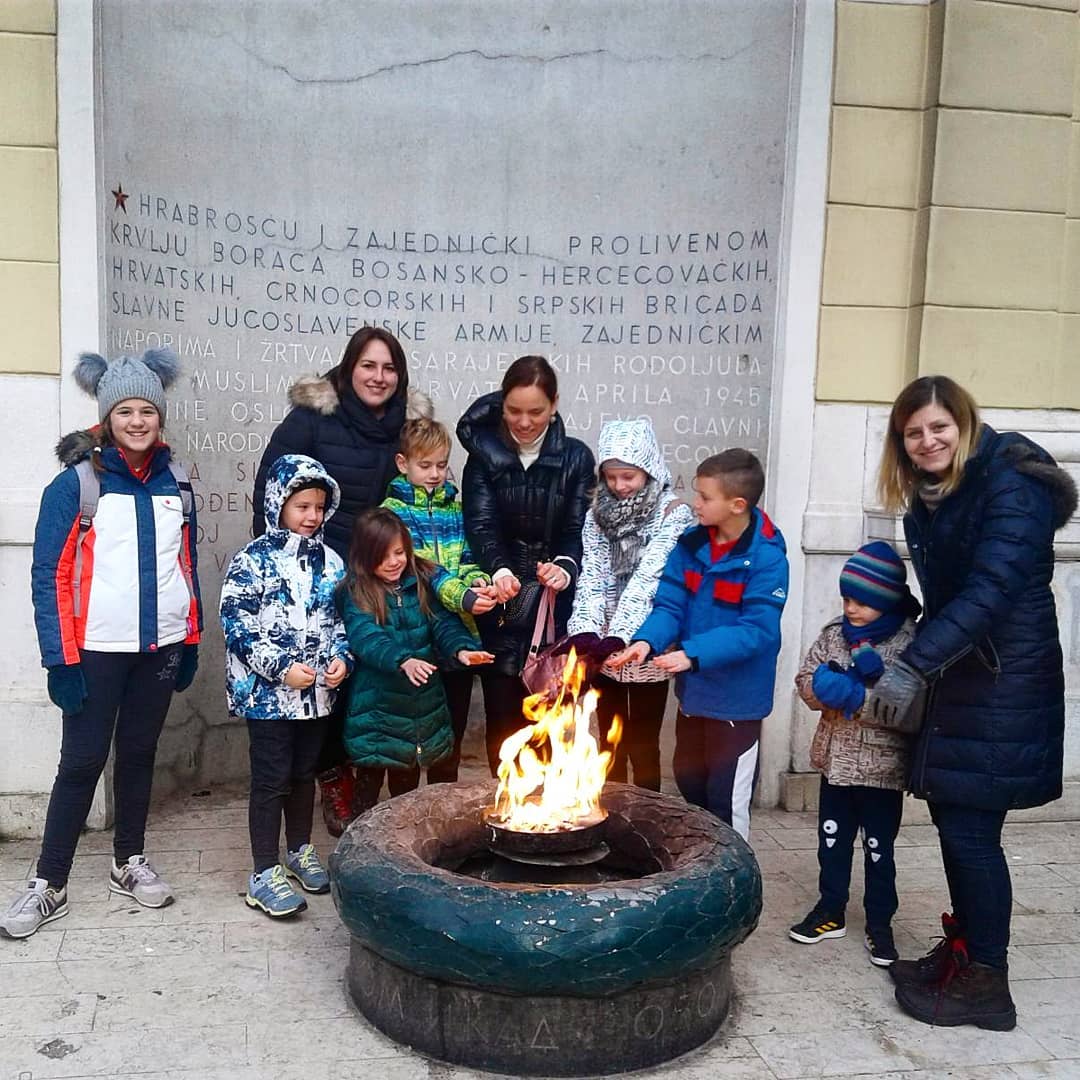 >Eternal Flame: symbol of fallen fighters and civilians in World War II, but also a symbol of life and vibrancy of the city.

Summer garden of this hotel Europe which is an Austro-Hungarian building was actually built on top of the remains of Tašlihan, place constructed in Ottoman period. Two historical places on one sight. Tašlihan was one of three caravanserais in Sarajevo, which served both travellers and horses.

We will go through endowment of Gazi Husref bey, by visiting the Gazi Husref beys mosque, Clock tower famously called Sahat Kula and its belonging building Muvekithana, Madrassa, Khanikah and Library, first public toilette in Sarajevo, Imaret kitchen (once serving only poor), burial place of Gazi Husrev-bey and few other locations important for understanding this complex which is biggest in the Balkans.

Morića Han will be our next stop and this is certainly one of those corners where you can imagine yourself being in a tale from 1001 Nights Middle Eastern Book . This inn is Sarajevo’s only remaining caravanserai, a place where merchant caravans could find accommodation during the Ottoman period.

Old Orthodox Church, the oldest religious structure in the city will be our last stop for a day and will offer you a shocking experience of “time travel” as soon as you place your foot in its stunning garden. 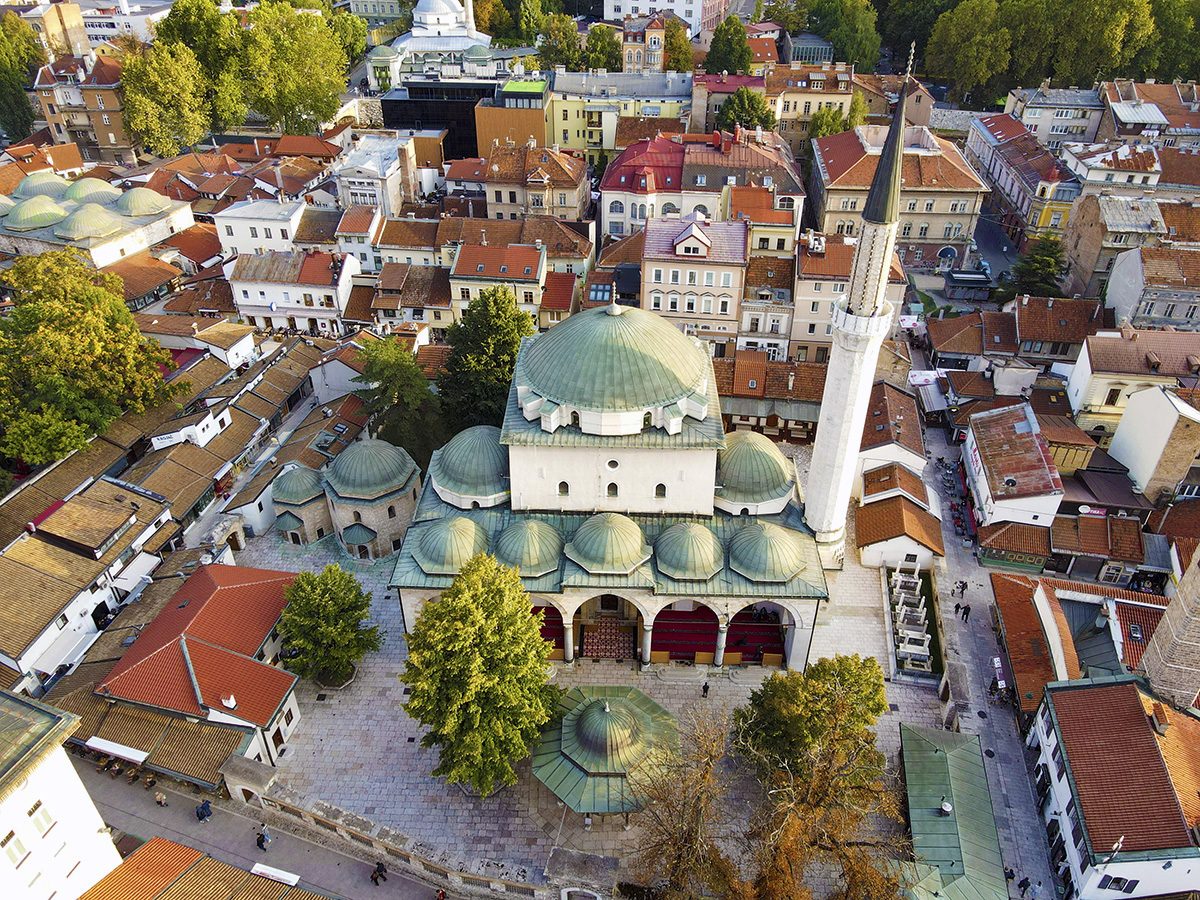 What you will learn during the our Free Walking Tour?

If you are on short time in Sarajevo or prefer to maximise your stay in Sarajevo, our long term experience tells us that the best way to optimise one day in Sarajevo is to take our Sarajevo Free Walking Tour at 10 AM and join our Sarajevo Siege Tour with War Tunnel at 2 PM.

If you’d like to learn more about Sarajevo by tasting some of the finest local food and drinks, please consider taking a private tour. 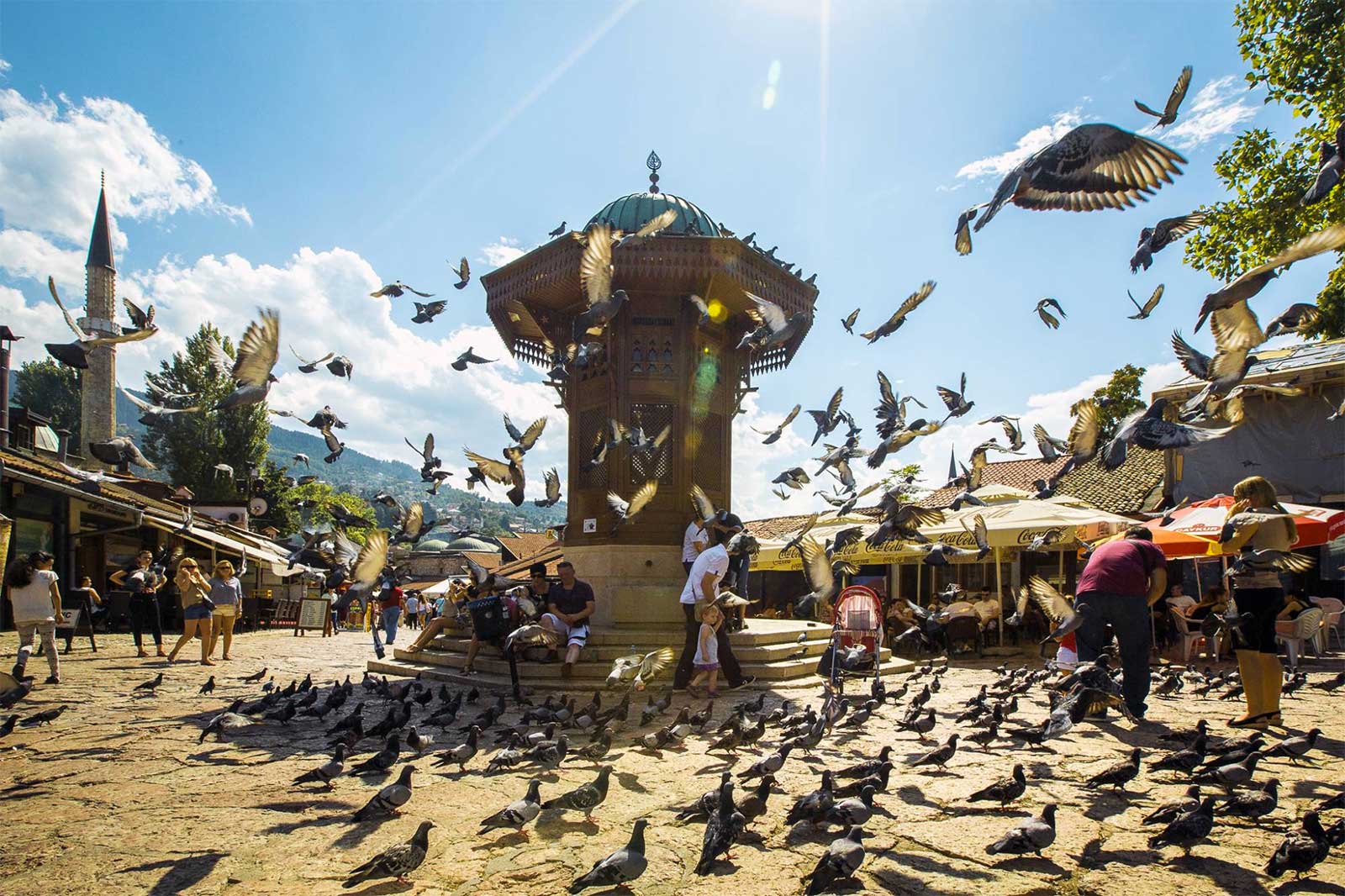 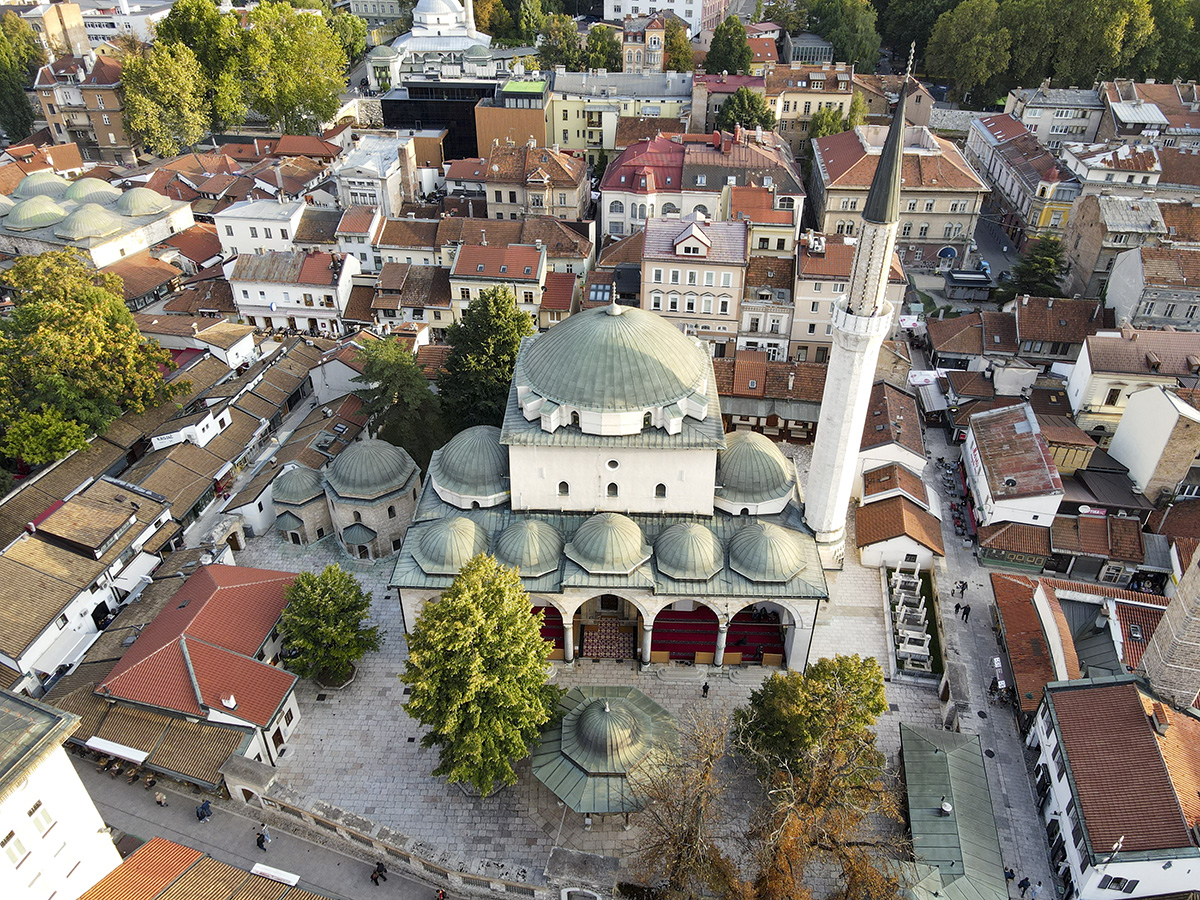 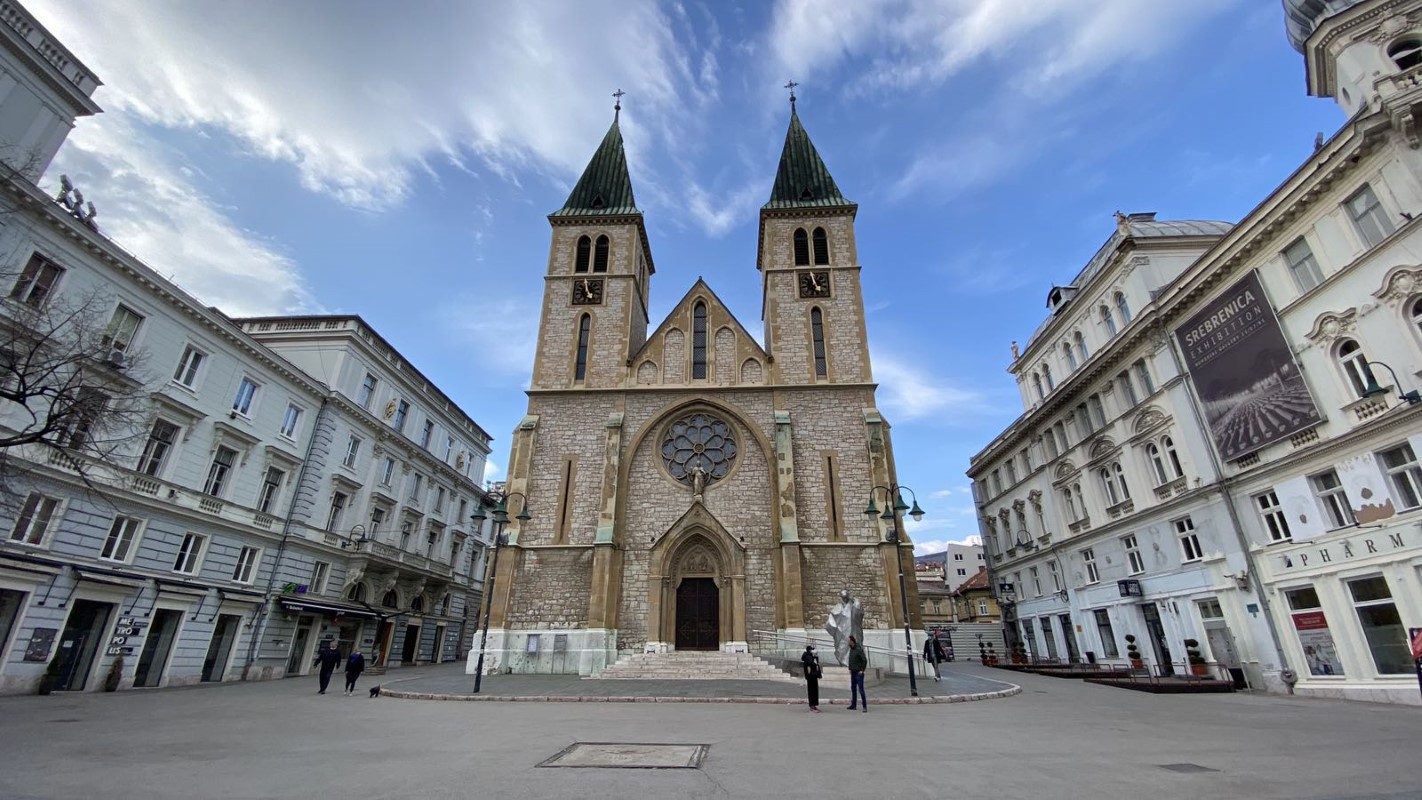 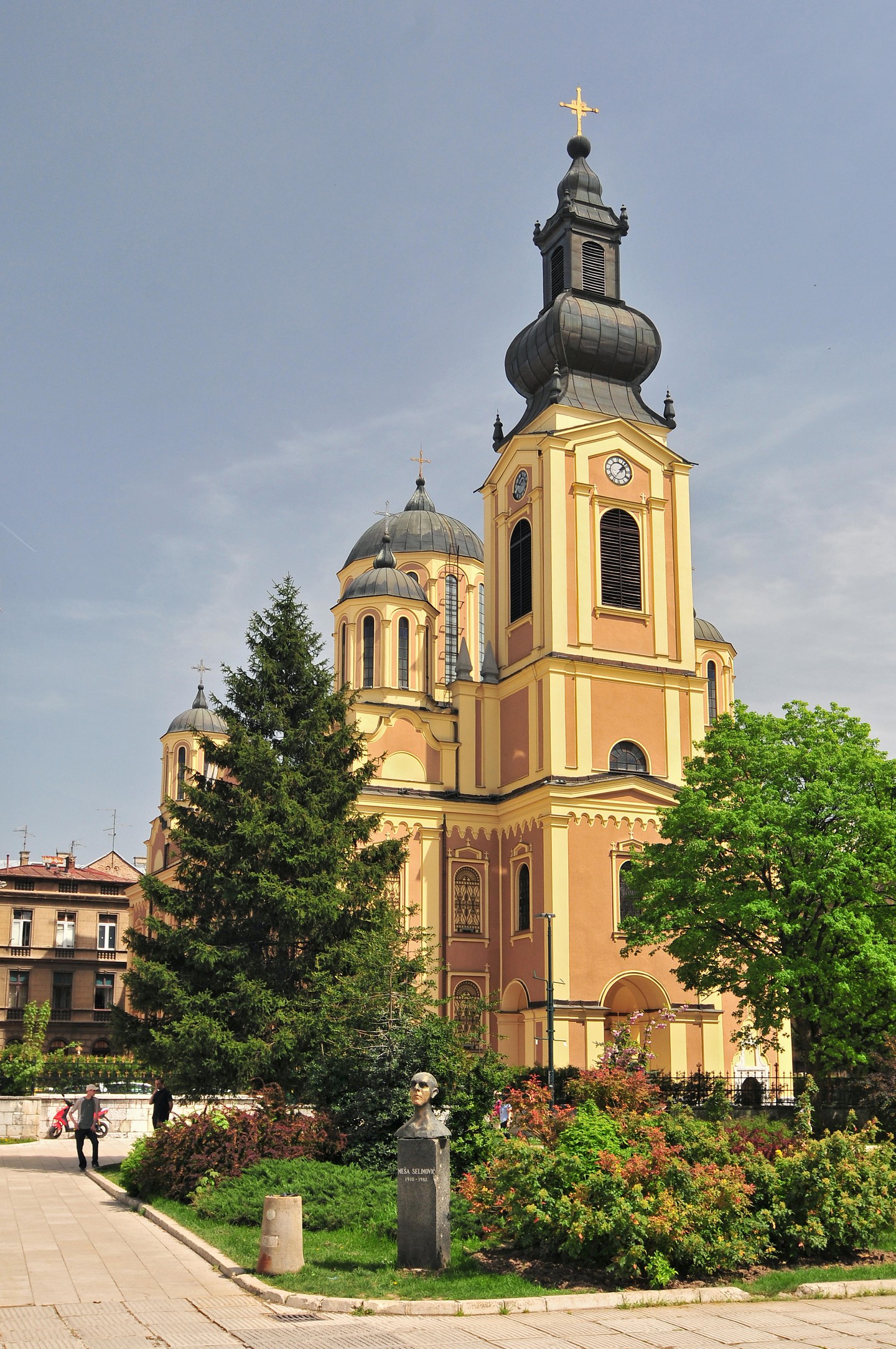 The Cathedral Church of the Nativity of the Theotokos 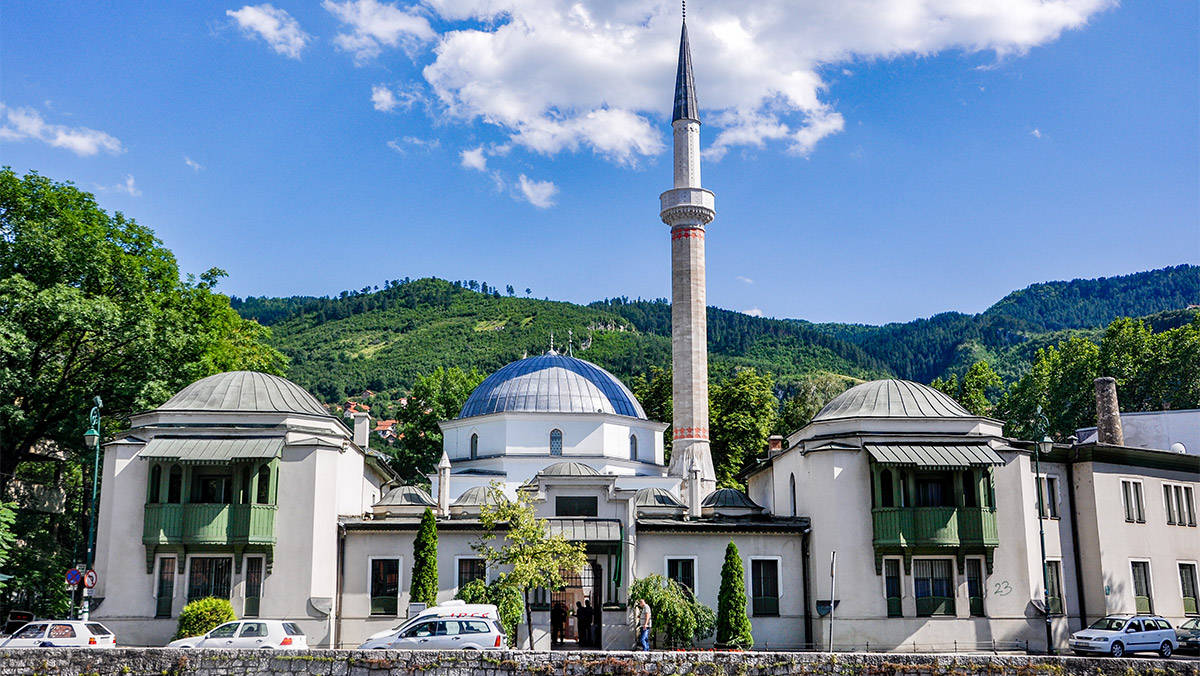 The Emperor’s Mosque is the oldest Sarajevo’s mosque 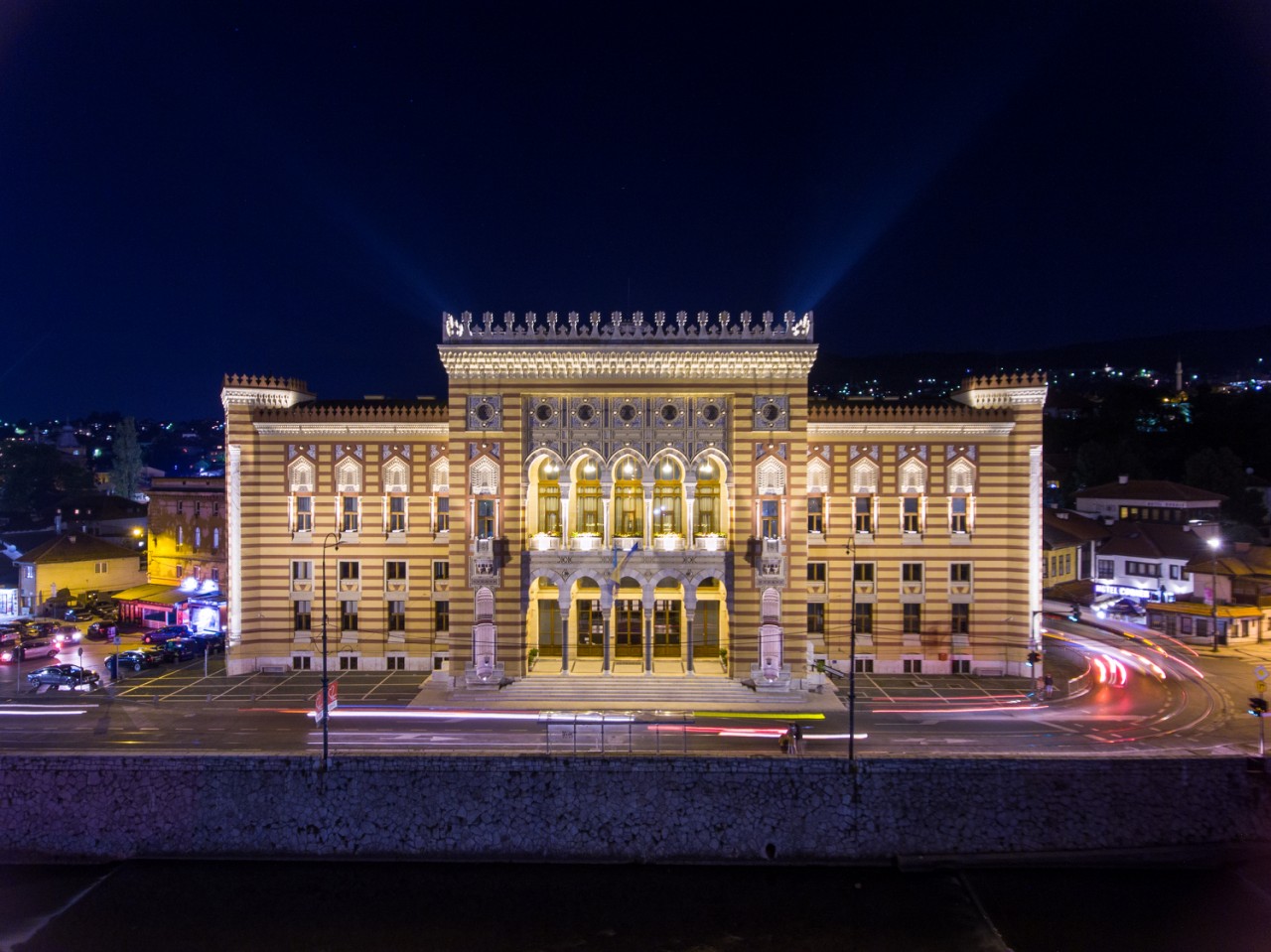 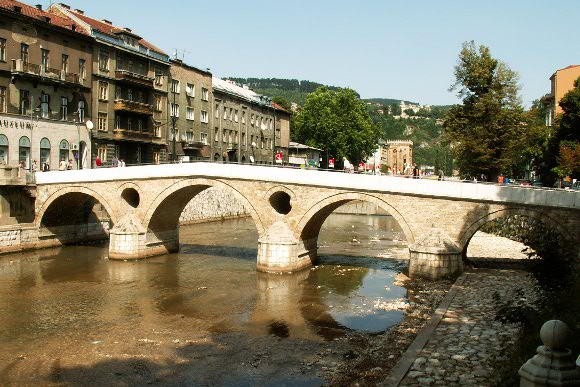 I recommend Funky Tours with all my heart. I took two of their tours and all the staff are welcoming, lovely, flexible, understaning and knowledgeable. And so very passionate about their culture they transmit it!

This first review is for the free (BUT DO TIP 20 BAM Minimum I’d say) Walking Tour with Amel who is proud of showing his city and teach its rich and complex history in 2 hours and answers questions and, he does not sound like he’s following the script. Amazing city to learn, enjoy and fantastic people.

Sarajevo is something else. Exceeded all expections, Underrated jewel that has suffered much and yet has very best friendly creative, aware, generous people who gave me the best solo birthday trip ever! I will be back! Hvala!!

We arranged a walking tour of Sarajevo and a separate siege tour with the Funky tours and thoroughly enjoyed both experiences. We had wonderful guides for both. Emir did a great job telling us about Sarajevo and showing us around the city. Adnan was fantastic sharing his personal experiences from the siege period. We really enjoyed the personal touch of both guides, their excellent ability to communicate. Adnan’s way of bringing the painful events to life was really unique for a guided tour experience.

I am also grateful to Edna for her responsiveness and helping us to arrange everything so smoothly. A must do in Sarajevo!

We did the free walking tour with Emin. He taught us so much history in our three hours and it get us a great introduction to Sarajevo and the region.

I’d highly recommend starting your visit to Sarajevo with this tour.

Emin was very friendly and interesting to speak to and he gave us recommendations for the rest of our time in Sarajevo. He also took us to a cool copper design demonstration and we ended up going back to the shop to buy Bosnian coffee sets.

The whole team at Funky Tours was fantastic- they didn’t have a guide available for another tour we had been looking at so Nadira gave us all the info we needed to plan our own activities for that day.

You can’t go wrong working with them!

Funky Tours is a great tour organiser in Bosnia & Herzegovina.

They organised a 6-days tailor tour for us and were very flexible. The team members are professional, very well informed and most importantly super kind and friendly.

Ema did the whole tour organisation and was very responsive before, during and even after the tours. With Emin we did the Sarajevo streets tour, he is a passionate of the modern history of the Balkan and provided in 4-hours all the information to understand the history of Bosnia & Herzegovina with focus on Sarajevo. With Skender (Founder of Funky tours) and Enis we did a amazing 8-hours hike to Lukomir village. With Edna and Tarik, 2 young motivated students working as tour guide on part time basis, we visit Tito’s bunker and did a short hike next to Sarajevo. With Emir and Sara, we visit Jajce and Travnik, a full day tour where Emir (an archaeologist) took us on a journey covering Bosnian history and heritage from ancient time to modern days. With Almir, a war veteran, we did the Sarajevo siege tour, a must do tour to understand the atrocity of war and learn from what happened in Sarajevo so it won’t be repeated.

In a nutshell, visiting Bosnia & Herzegovina with Funky Tours is highly recommended.

On August 26 we (4 of us) did the free walking tour (tip-based) with Emen. We had been traveling through the Balkans for 2 weeks, and our eyes, heads, and hearts were on overloading from trying to absorb all the visual beauty and complicated history around us.

Only a top-notch guide could have wowed us at this point. That top-notch guide was Emen. He led us through his city, sharing his love and understanding for its people and cultures and helped us to wrap our brains around the beautiful tapestry that is present-day Sarajevo. As I think back on the day, I will remember so much—the Bascarsija, the mosques, the churches, the Haggadah, the food samples, our lesson in drinking Bosnian coffee, the beginning of World War I, the Sarajevo roses, the heart-wrenching siege—and all of this made a lasting impression because of Emen’s knowledge and commitment to telling the story of his people.

I highly recommend this tour to anyone seeking lasting memories of Sarajevo.

123456789101112
4 travellers are considering this tour right now!
Start WhatsApp Chat
1
24/7 Assistance
Let's talk about the Balkans!
Thinking of Balkans? We are the experts!