The wine tradition of Herzegovina is very old and it dates from the times of the Illyrians (2000 BC). Thracians were the first ones that brought the vine grapes to Herzegovina. This tradition was continued by the Slavs, after they came in the 7th century. The Slavs assimilated with the Illyrians and adopted lots of their culture.

During the times of the Bosnian Banate and the Bosnian Kingdom almost every royal family had their own vineyards. During the Ottoman times (1463. – 1878.) the wine production and consummation almost disappeared. Austro – Hungarians made the wine manufacture alive again, because they recognized the old wine tradition of Bosnia and Herzegovina.

The Herzegovinian wine production is concentrated in the river systems of Neretva and Trebišnjica. The wine production had its ups and downs, but it always stayed high quality. European Union knew that Herzegovinian wine is supreme quality with a long – standing tradition. Therefore, the EU decided to invest in a so called project “Herzegovinian wine route”. In this way all the best winemakers are connected and easily approachable for wine tasting, buying and learning about the tradition from first hand. One of the best winemakers in Herzegovina is the Brkić family, based in Čitluk, where is the famous pilgrimage called Međugorje. 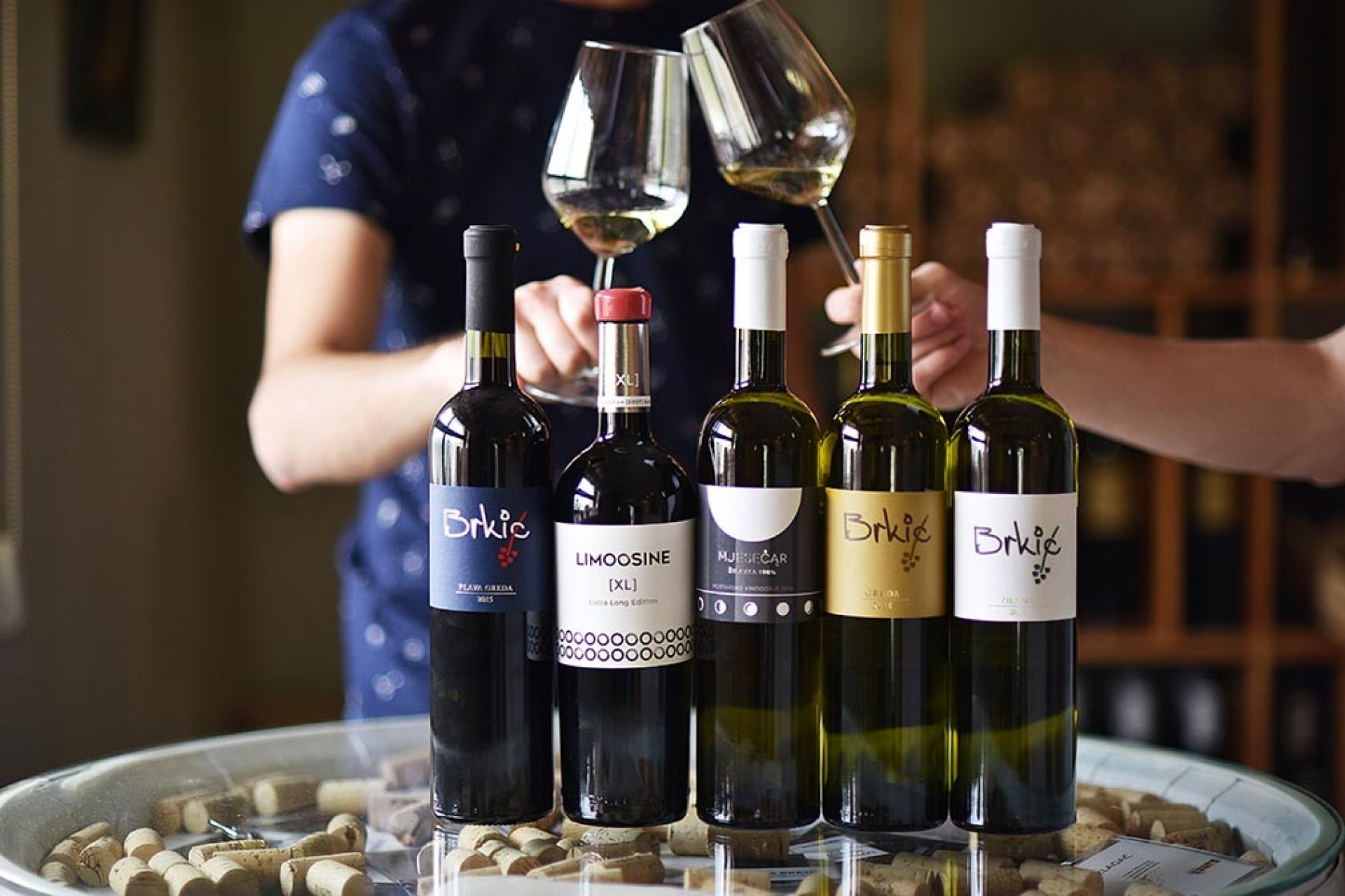 Herzegovina Wine Route is, nowadays, a story of more than 40 families involved into a devoted wine producing business. This is the story of a tradition passed down from generation to generation.

Brkić Supreme Quality Wine is made with Hearth

“Brkić Wine”  (Bos. Brkić vino) production started in 1979. by Paško Brkić. Paško was running the business until 1989. after which his son Josip continued. In 1979. Paško Brkić established the first contemporary private wine basement in Bosnia & Herzegovina. After Paško Brkić passed away his son Josip continued the business when he was just 17 years old. Even nowadays, like 17 years before, he still has the title of the youngest winemaker in Bosnia & Herzegovina.

Current owner is Paško’s son Josip, while the rest of the team is his wife and his three sons. His oldest son Paško, named after his grandfather, is following his father all around the globe on wine promotions. They were in the USA, China, many European countries and always successfully presenting Bosnia & Herzegovina on the wine market. “Brkić Wine” was always qualified as one of the best wines in the competition.

The idea of “Brkić Wine” is to produce the wine in a natural way as much as possible. Therefore, they use two methods, “sur lie” and australian red methode. “Sur lie” method is used for white wine production, or we should say “Žilavka” wine. Australian red method is used for red wine production, or “Blatina”  wine. To sum up, it means that with less treatment on grapes, wine should be higher quality. Now you realise their main motto: “The wine is a member of our family. We are born with it, we live it and we die with it!” 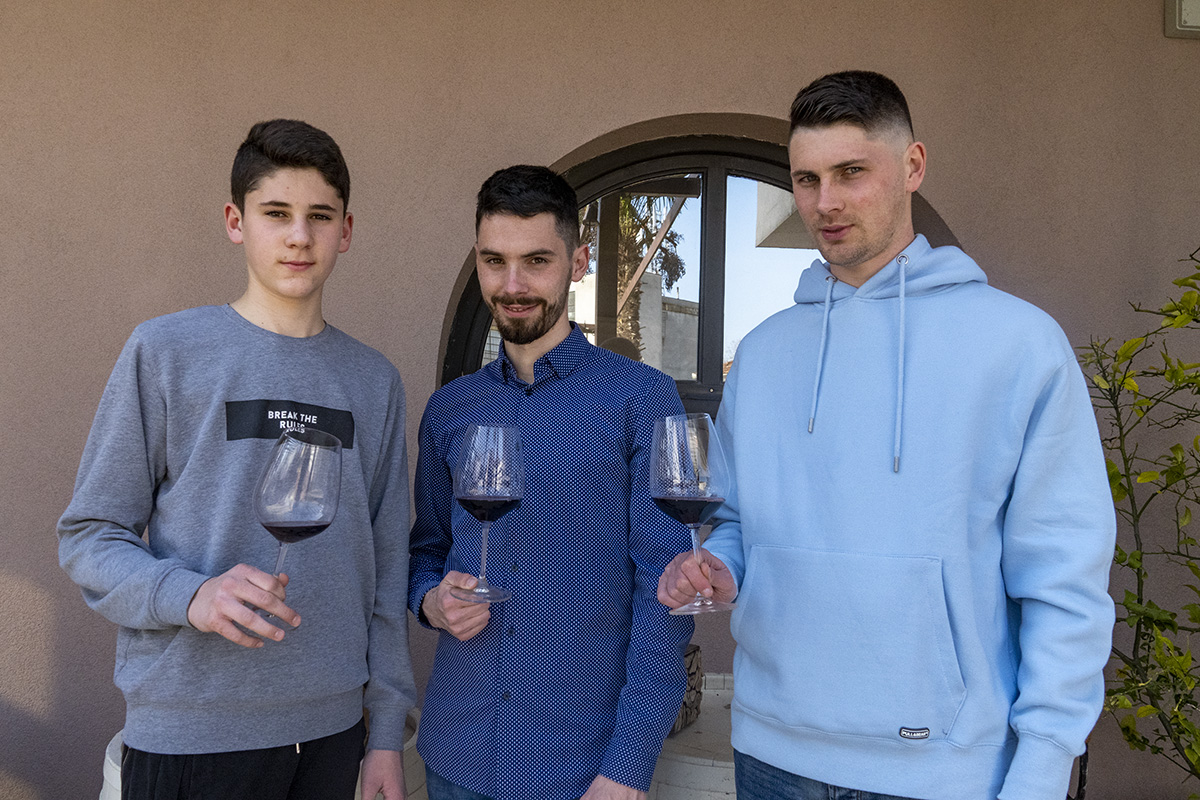 As can be seen they are pioneers in many things and they produce the wine with love, passion and devotion. The Brkić family is always open to host you in their charming home. Show you the wine cellar, introduce you to their wine types and share the passion.

Herzegovina is proud of the two types of wine grapes and those are “Žilavka” (white wine grape) and “Blatina” (red wine grape). 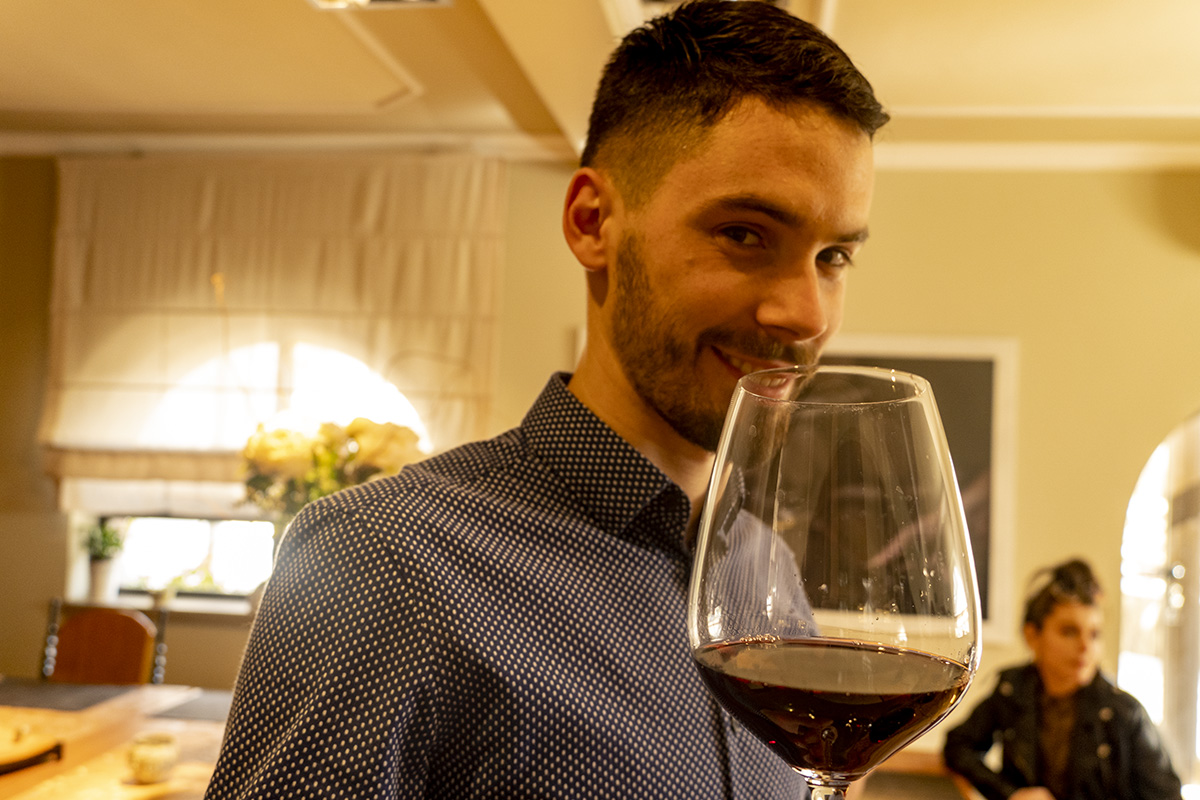 “Blatina” is a quality and in specific locations a premium quality dry red wine, produced with the variety of grapes that has the same name. It is good to let “Blatina” age for  several years in wooden barrels. Therefore, the quality is the highest with up to 5 years of ageing. 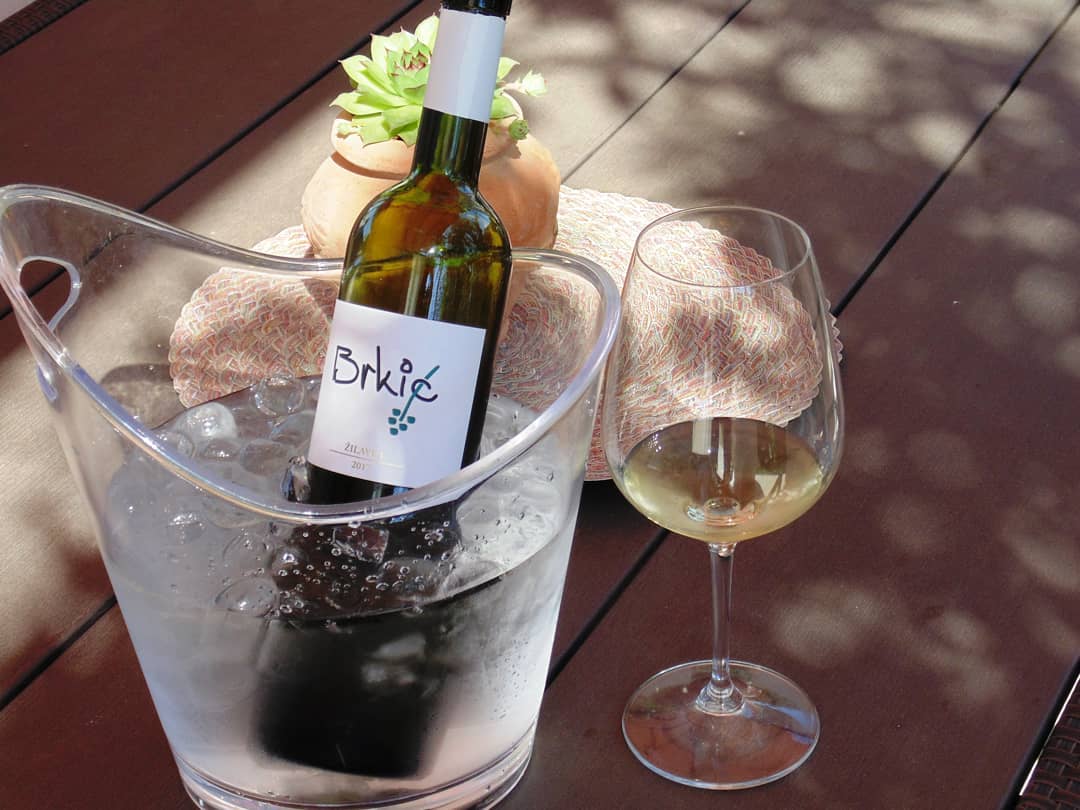 Name “Žilavka” (Bos. žila means vein) is probably derived from it’s look when the grapes are ripe. Through its thick but transparent skin you can see the grape fine veins. “Žilavka” is characteristic for its unique grandeur, delicacy and abundance. Therefore, “Žilavka” is a symbol of Herzegovina, the region of sunny and karst ambience.

“Brkić Wine” produces 5 types of wines and all of them are prepared with passion and dedication. Three of them are white “Žilavka” types and two of them are red “Blatina” types.

“Žilavka Inox” is made in the way that is kept in inox tanks for 6 – 7 months. After that the wine goes for one month in the bottles. Yearly “Brkić Wine” produces 5000 – 7000 bottles of “Žilavka Inox” type.

“Mjesečar” (Eng. “Sleepwalker”) is made by 100% “Žilavka” wine grape. This type of wine is stored always in a new barrel made from the Bosnian oak. It’s also important that you follow the Moon. When the Moon is going from a new to full, then the grapes in the barrel are mixed by gravity. When the Moon is going from full to new, then the wine makers need to mix it gently once every month. After 9 – 12 months the wine is ready. Month before the wine goes into bottles the winemakers don’t mix the wine. “Brkić Wine” produces 745 bottles of “Mjesečar” wine type. 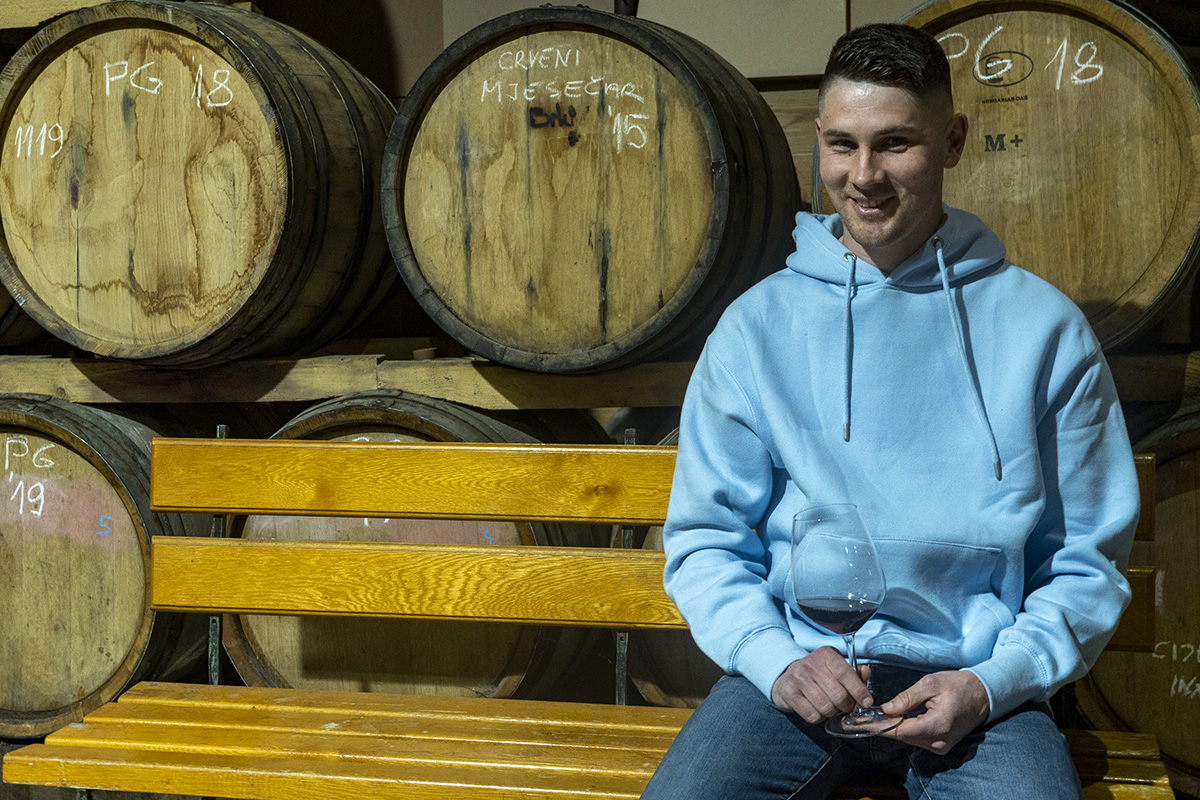 Mjesecar (Moon walker) wine is produced in a complete organic way, by the rules of biodynamic production with a help of the Moon. Carefully following the Moon phases Brkic Family did all the work in vineyards, from pruning, earthing, harvesting, grape per grape placing in the barrel, to the wine itself.

“Rose” is 100% made of “Blatina” wine grapes. It’s been made by kneading the grapes, after what comes the pressing. Next step is the inox barrel where it is kept for 6 months, after what goes into the bottles for selling.

“Plava Greda” is made with 85 % of  “Blatina” wine grapes and 15 % of “Vranac” wine grapes. This wine is kept in 4 different oak barrels for 2 years. The American, Slavonian, Hungarian and Bosnian oak barrels. After this phase the wine goes into inox for 24 hours. The last phase is the bottling, where it is kept for 6 – 7 months. Then it is ready for the market. “Brkić Wine” produces 3000 bottles of “Plava Greda”. 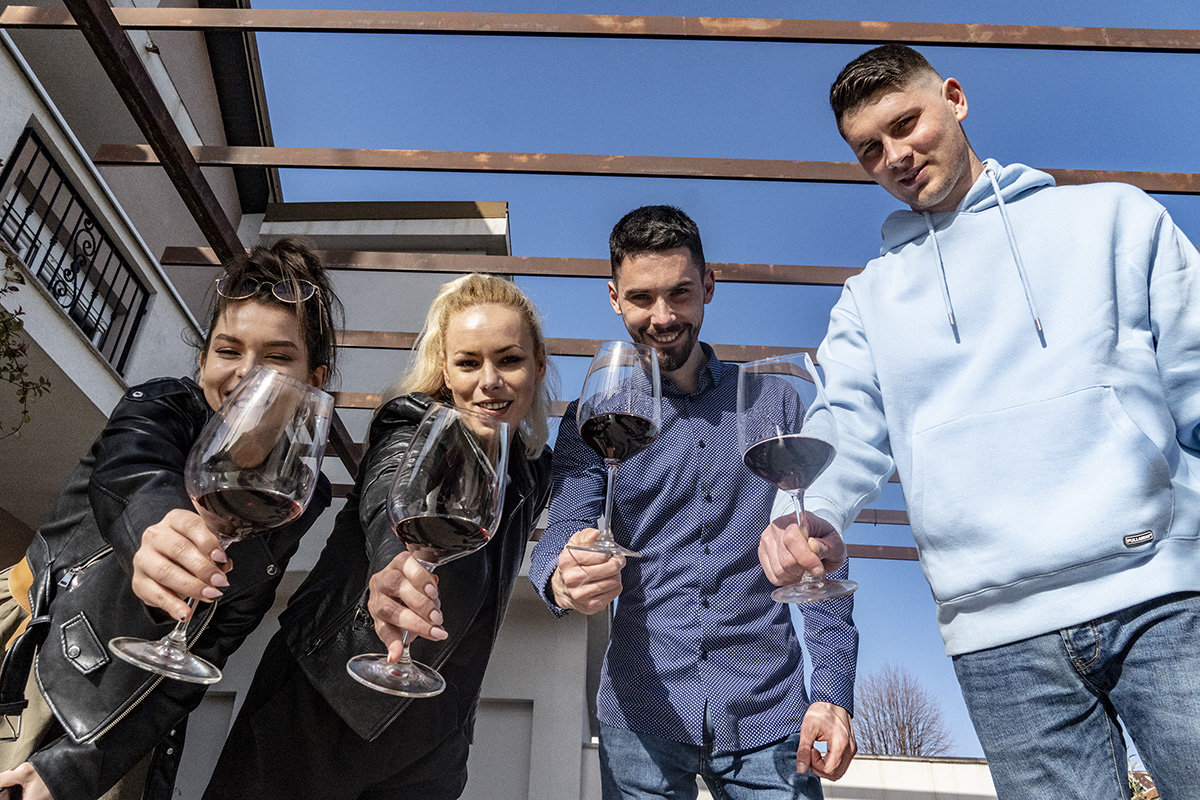 “We see vineyard as a beginning of a new life,
for  the vine will grow a grape,
the grape will become wine,
the wine will reach the person
who will experience exactly that new life while tasting the wine itself.”