Righteous among the Nations according to the Bosnian Recipe 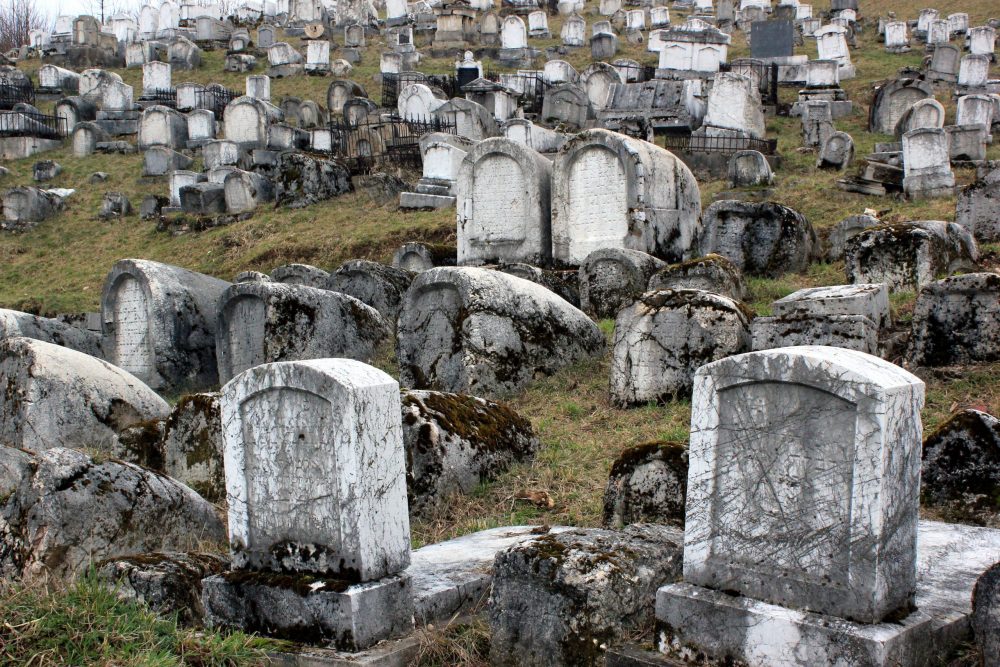 Jewish cemetery in Sarajevo with the tombstones dating from ottoman times.

Tough times are pointing out goodness and evil in every human being. Bosnia and Herzegovina is full of stories about good people in an evil time.

WW2 was the historic breakpoint in the lives of the Bosnian Jews. After the Independent State of Croatia was formed, persecutions of “unwanted” immediately started. Bosnia is full of stories about people who weren’t just bystanders, who risked their own lives to protect neighbors. In the postwar period, the State of Israel recognized these individuals as a Righteous Among the Nations. As of 2020, 57 persons from Bosnia and Herzegovina hold this status.

Hardaga Family - Bravery and Fearless in its Best

Among the “righteous” are 4 members of the Hardaga family from Bosnia who provided shelter for the Jewish Kabilio family when German forces occupied Bosnia in 1941. Hardaga’s were pious and patriarchal in which women donned a veil and everyone strictly observed all the religious laws and rites. Similarly, Kabilio family observed all the Jewish laws and rites on their end.

Never forced to live in ghettos, the Jews of Bosnia had a better “treatment” compared with most of Western Europe. By the 1930s there were about 12,000 Jews in Sarajevo and another 2,000 in other Bosnian cities. Unfortunately, the Jewish population would be decimated during the Holocaust with 10,000 murdered by Croatian pro-Nazi fascists. 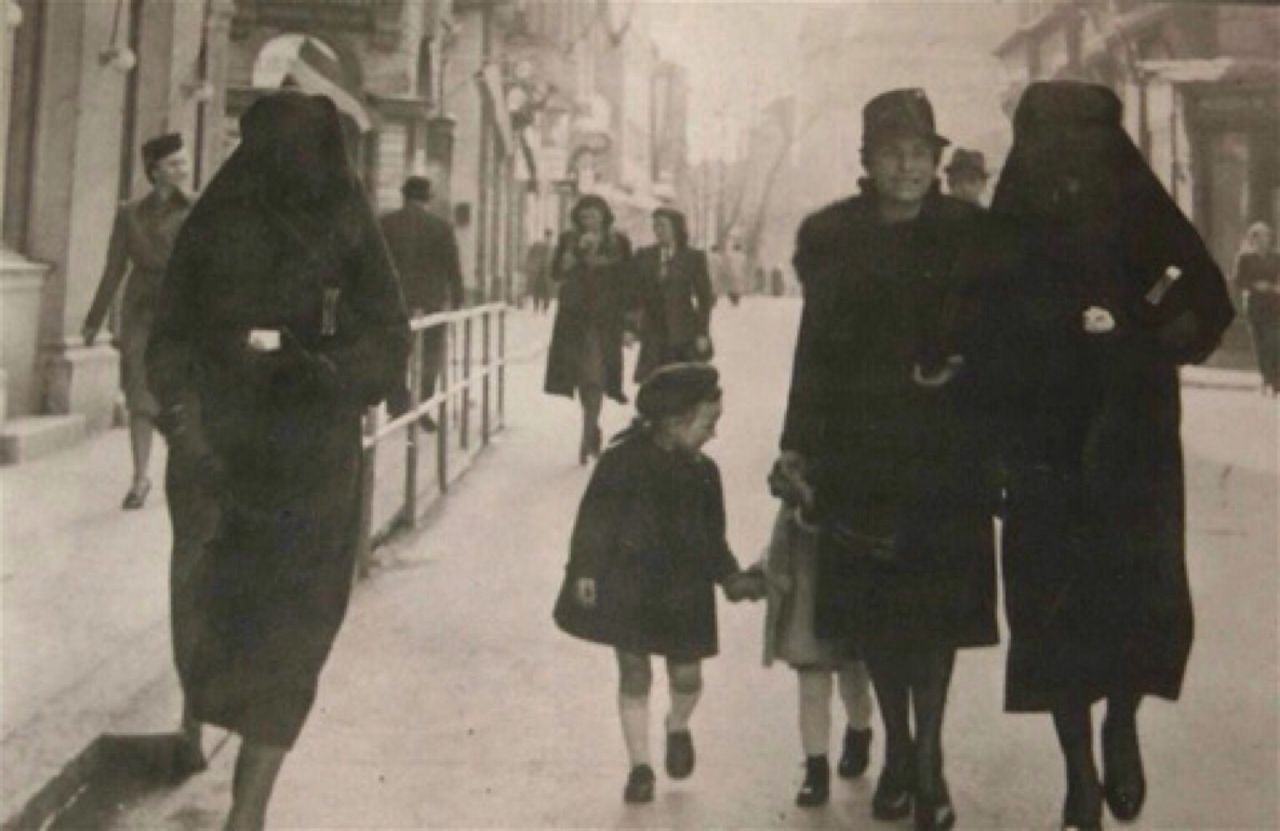 After one of the bombings of Sarajevo, Kabilio’s house was destroyed. When danger subsided, Zejneba Hardaga rushed to see what had happened to the Kabilios. She found Joseph with his wife Rifka and their two children, Benjamin and Tova, on the street. Their house had been destroyed. Without hesitation, Zejneba brought the Kabilios to her home where her husband Mustafa and his brother Izet and wife Bahrija welcomed them with outstretched arms.

“Whatever is ours will be yours. We’ll share everything like family – feel as if you are in your own home,” they said. Later Zejneba witnessed that was the first time a foreign man spent a night in their home. But they took Joseph for more like a brother to them. If not before then, certainly from the day he and his family moved to a Hardaga’s home.

Of course, anyone who was providing shelter for the Jews in their home was directly putting themselves in danger. The local headquarters of the Gestapo, the Nazi secret police, was opposite the Hardagas’ apartment. Many notices posted by Gestapo, were letting people know harboring the Jews is punishable by death.

The Kabilios remained hidden by the Hardagas until they could relocate to the Bosnian city of Mostar under Italian rule and a safer place for Jews.

Kabilio family reported and witnessed their saviors in Yad Vashem. That led to the recognition of four Hardaga family members as “Righteous among the Nations” in 1984. The Hardagas became the first Muslims worldwide to be recognized as with such status. the official title that Israel bestows on non-Jews who took extraordinary risks to save Jews during the Holocaust. Zejneba came to Jerusalem for a ceremony, where she received a medal and planted a tree. Best of all was a coffee-drinking with Joseph and reminiscing about life in Sarajevo before the war. During the ceremonial speech, she simply explained that helping dear people was her’s a human duty.

8 years after, the war in Sarajevo and in the rest of Bosnia was raging. Sarajevo was besieged for almost 4 years, and it paid it’s freedom with 11.541 life, mostly Muslims. 50 years before that, during WW2, Sarajevo had lost roughly the same number of its citizens, mostly Jews.

Kabilio’s thought is there anything they could do for Hardagas. After seeing a direct strike on the building where Zejneba lived, the Kabilio family petitioned first a journalist, and then the Israeli government, to help Zejneba, her daughter Amina, & her grandchildren, to escape. 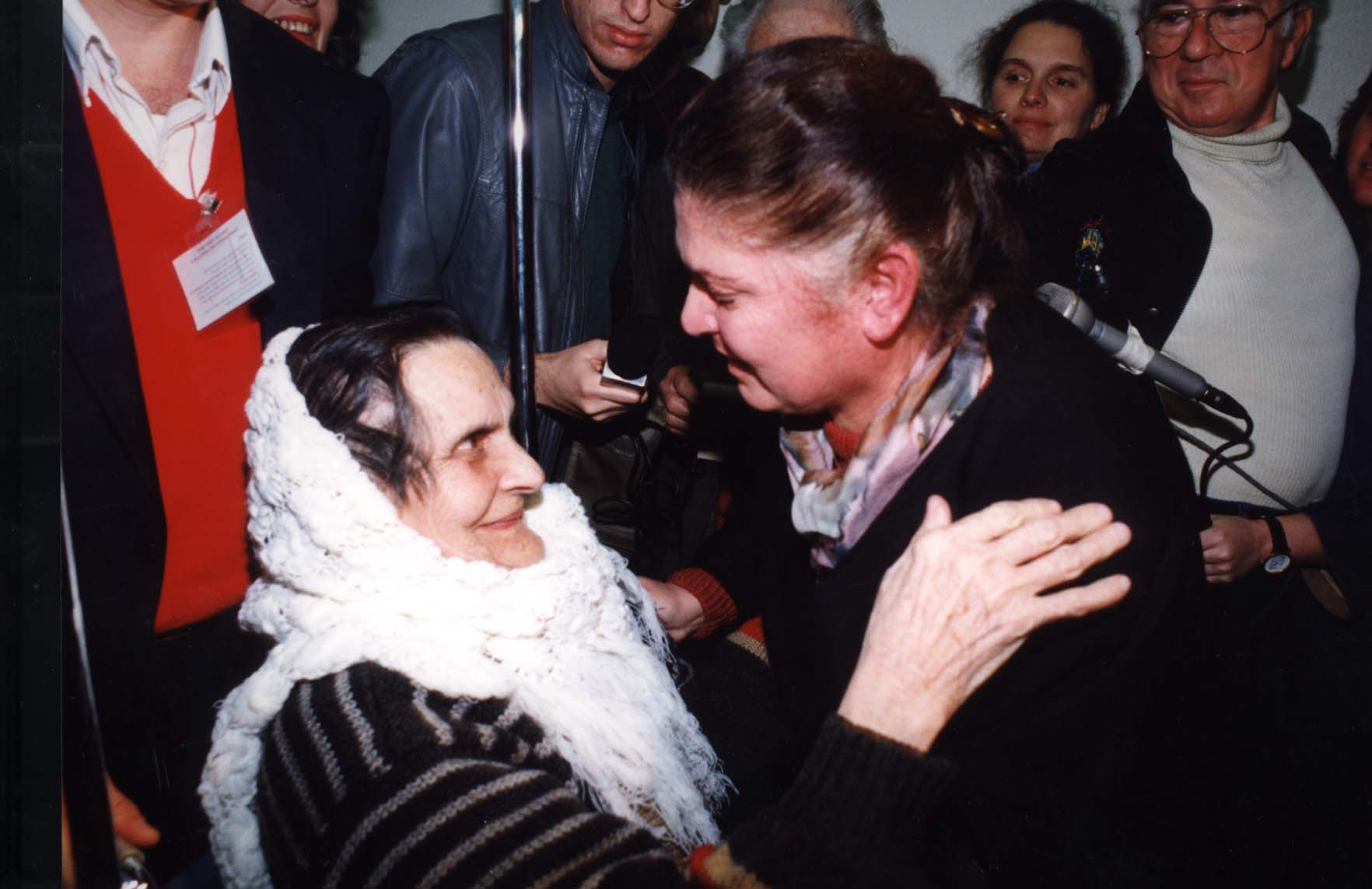 Zejneba Hardaga was welcomed by Tava, Joseph’s and Rifka’s daughter, in Israel at the airport in 1994.

In February 1994, the family was on the last Jewish convoy out of Sarajevo. When they arrived in Israel, politicians, media and crowds of well-wishers were at the airport – including, of course, the Khavilio family. Amina Pecanac felt like she was coming home, and she ultimately converted to Judaism and changed its name to Sara. A year later she began working at Yad Vashem, where there were memorials to her mother and her grandfather.

Through a remarkable twist of fate, both the Kabilios and the Pecanac/Hardaga families now owe their lives to each other.

Derviš Korkut was a librarian and a National Museum curator who had a long-lasting connection with the Jewish Community in Sarajevo. At the beginning of 1941 in his library office in Museum, he also wrote a memorandum to the Government on problems of ethnic cleansing of Roma people in Bosnia. That was followed by the short article on Jews of Sarajevo entitled “Anti-Semitism is foreign to the Muslims of Bosnia and Herzegovina“. While demystifying the anti-Semitism he says:

“Here there been and recently were, several attempts, coming from non-Muslim circles, that the Muslims should be engaged as the avant-garde against the Jews. All these attempts have failed, because it was impossible that the Muslim population should be adopted for two levels moral: one for them, and other for all others“.

Derviš and his wife Servet Korkut hid Mira Papo, a Jewish girl, and introduced her as their cousin Amira (Muslim name). (A)mira got the new traditional Muslim clothes and spent the next two years with them. Later, she managed to escape to Dalmatia, where she survived thanks to a different identity. After the war ended, Derviš as a strict anti-fascist, an opponent to all ideologies, refused to join the Communist Party. He was charged for collaboration with the Nazis. After 8 years in prison, he died in 1969. 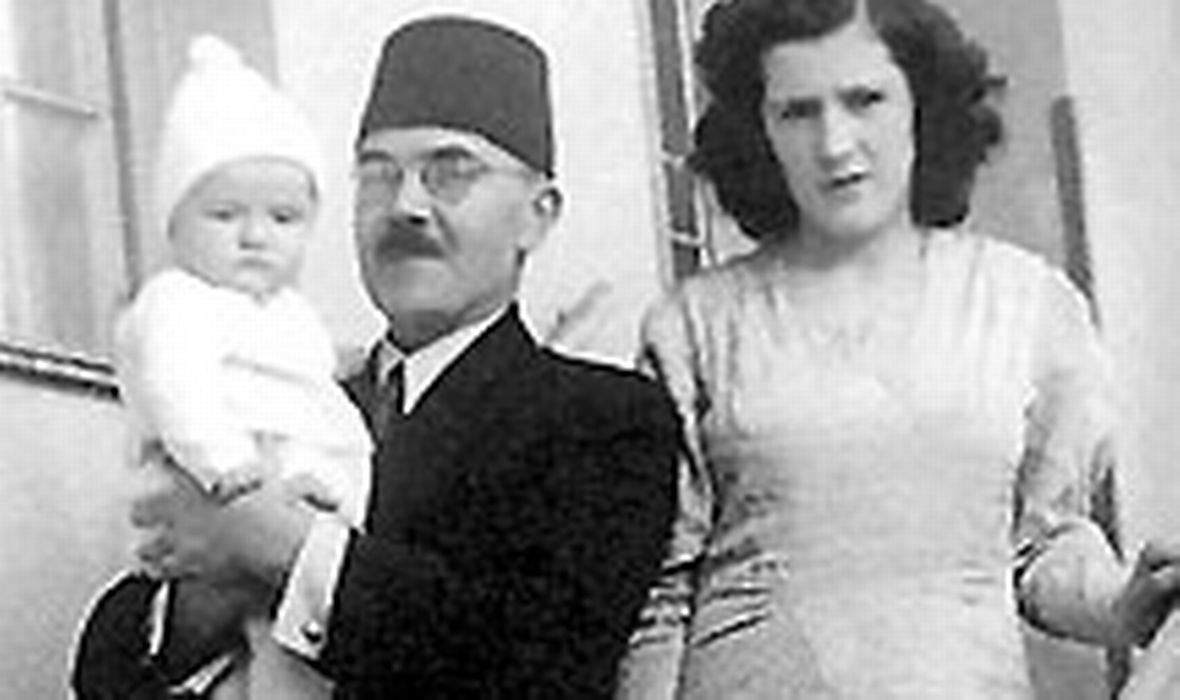 Derviš Korkut with his wife Servet and their daughter.

Daughter and Mira returned the favor to Korkut family during the war in Sarajevo, in 1993. She urged the Yad Vashem Paris department to evacuate Servet and her kids from Sarajevo. Since a good deed never goes unrewarded, the daughter of Derviš during the Kosovo war in 1999 escaped the war zone thanks to Righteous Among the Nations recognition.

Mira missed her chance to witness in Derviš favor after he was charged with Nazi collaboration. She was a Yugoslav army officer, the same as her husband. A life-changing moment for her was when she realized she can return a little of the favor to the Korkut family. When Servet was evacuated from Sarajevo, Mira concluded: “Now I can die in peace”.

Prohić Family originated from Gračanica and had a reputation as one of the wealthiest in the whole of Yugoslavia. The story of saving the Nada Kolman starts in 1942. But before that, her parents settled in the town of Gračanica (northern Bosnia) in 1933. Her father Viktor Kolman got along with Avdo Prohić immediately when they met. Avdo was a doctor and Viktor was a pharmacist. Before WW2 two families were closest to each other, both because of private and professional reasons. On the eve of the war, local pro-Nazi ustaša government hasn’t persecuted Kolman family since they were lack of medical workers.

Amidst the war rumble, Nada was born in 1942. Unfortunately for her father, he was shot dead year after that, in one of the Nazi retaliation. In the following years, Nada’s mom also died due to poor conditions in Zagreb prison where she was moved soon after Viktor’s death. Since it was too dangerous for little Nada to stay in Gračanica, Avdo and his mom Esma decided to transfer Nada to his brother Sabrija in Zagreb.

Sabrija enjoyed a huge reputation since he was running a leading wood trading company in Yugoslavia. Fun fact is that he imported the first Ford in Bosnia in 1925. Nada lived for more than 2 years with Sabrija and his wife Safeta in Zagreb. Due to his reputation, he wasn’t suspicious of anybody, especially to Gestapo. Together with Nada, Sabrija’s home was a safe refuge for Slovenian girl Sonja, expelled from her home at the beginning of the war. 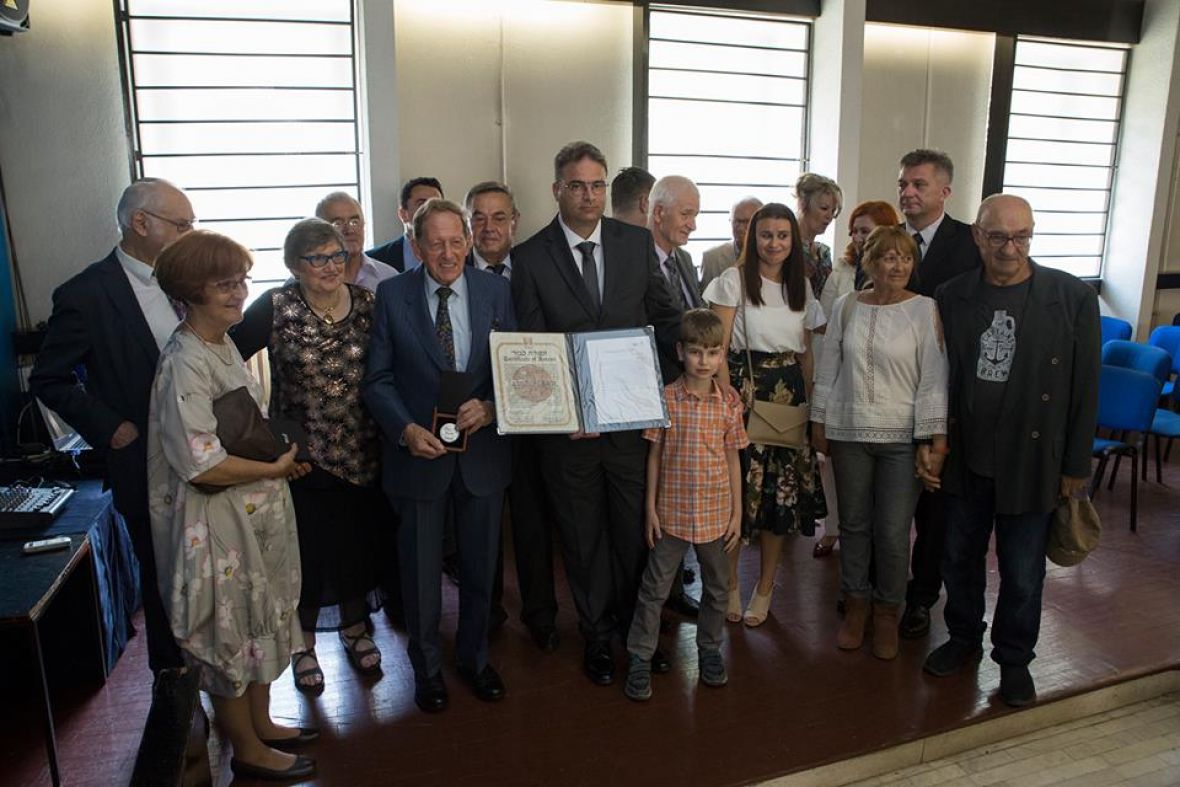 Nada Kolman (third from left) together with the successors of the Prohić family at the ceremony of receiving the medal of Righteous among the Nations in Sarajevo, July 2018.

In september of 1945, Nada was picked up by the family of her mom’s elder sister and adopted. After 1948. they emigrated to Israel. Nada’s cousin, Egon put a lot of effort into the process of recognizing 4 members of the Prohić family as a Righteous Among the Nations. That took place in Sarajevo, July 2018.

The Jewish cultural-educational and humanitarian society was founded in 1892. Society faced many obstacles in its work during the WW2 and the period of Socialist Yugoslavia. During the Socialist time, all religious organizations, La Benevolencija as well, were outlawed. When revived its work in 1992, at the eve of the war in Bosnia during the commemoration speech it’s been said:

Before the wars in Yugoslavia, the organization’s essential goal was to focus on cultural and educational purposes. At the outbreak of the violence, humanitarian issues had begun primary purpose. 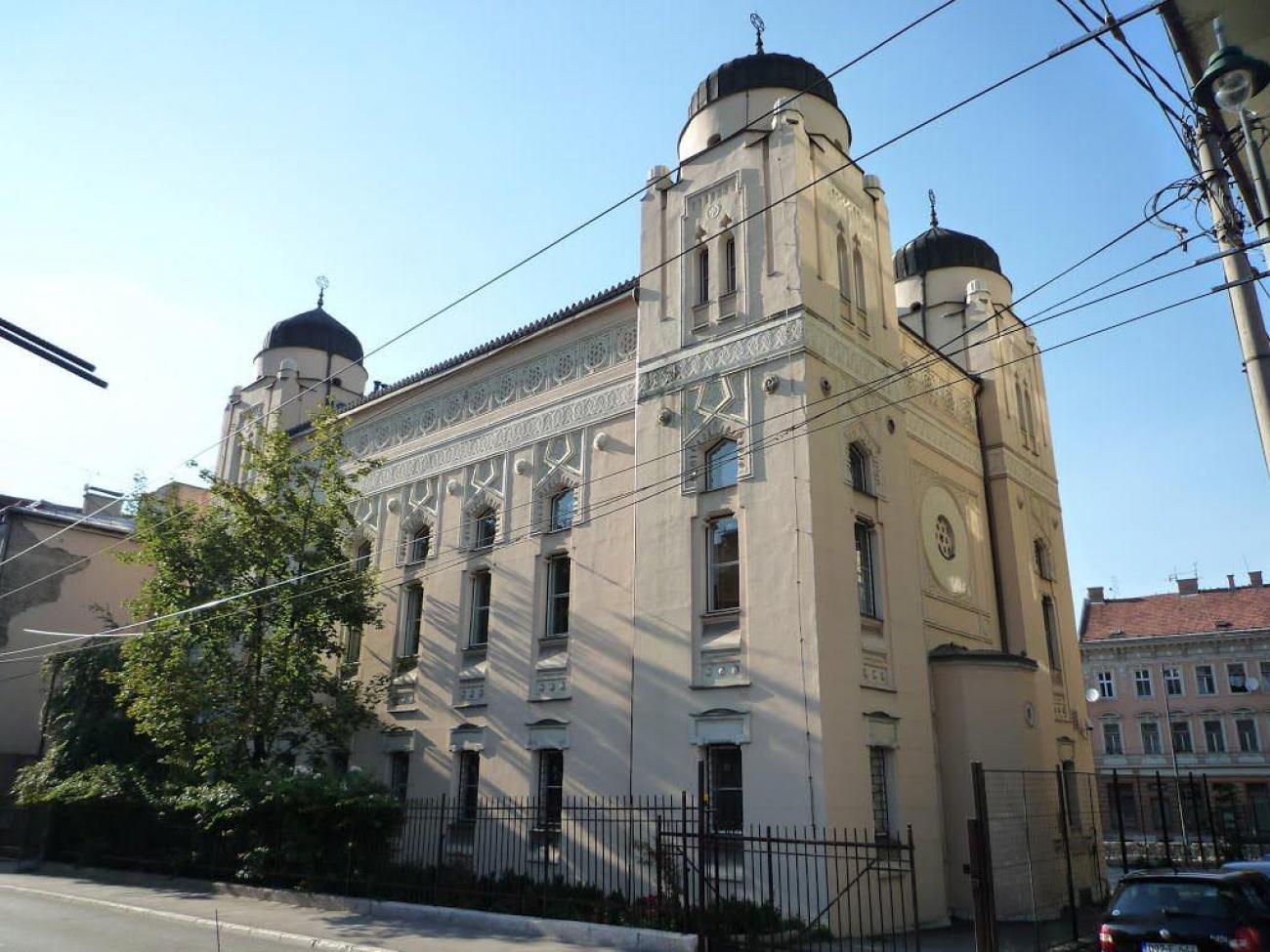 Sarajevo Ashkenazi synagogue, serving as a seat of La Benevolencija today as well.

Opening two pharmacies during the war that most of the people called “Jewish pharmacies”, a society knew what they were doing. One of these is still the pharmacy, meaning the location for it was carefully chosen.

A non-denominational soup kitchen was opened in Sarajevo, where roughly 300 meals were prepared every single day of the war. Nobody asked the people who they were, hunger makes no difference.

With the help of other Jewish societies around the globe, La Benevolencija managed to organize the evacuation of 2500 people, whom only 1000 were Jews. Since a lot of Jews stepped into inter-religious marriages, they had a decent connection with every warring side. That fact helped many people to find a safe refuge out of the city.

Graffiti on the Ashkenazi synagogue during the war said: “Jews are saving the city”. Maybe they weren’t an essential element in the city’s defense, but without their contribution, that defense would be much more challenging.