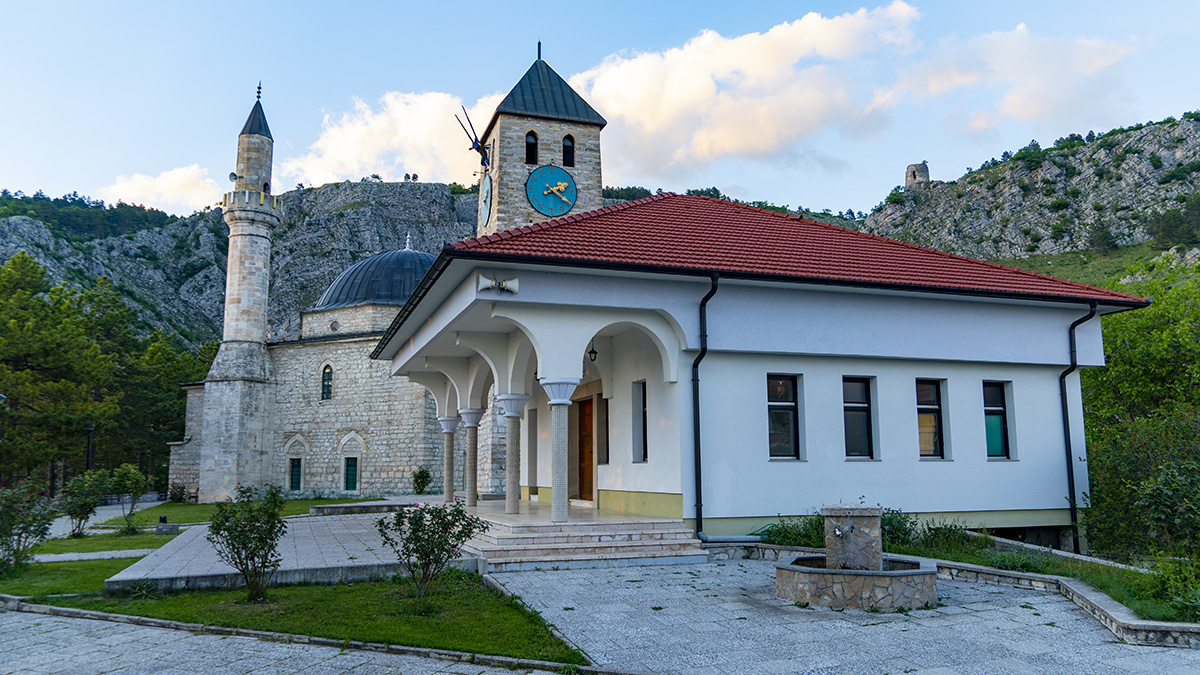 People in Livno are respected because of their contribution to the community in many different ways. The doctor cures people, but the ordinary street people from the old town can make you smile while blessing you with spontaneous crazy jokes, by the instruments they play and many others. If a neighbor gifts you with food, the dish that you give him back should always have a sweet or a fruit as a sign of gratitude. Those are some of the manners that are important to know if you are from some old town in Bosnia & Herzegovina.

The heritage of the old town of Livno is  not just preserved through the people, but also through the museums and art. The museum “Stari Grad” (Eng. “Old Town”) is a perfect example of how the old town mentality is preserved. It is an incredible private museum where you will find 700 different images of the old city of Livno and more than 7000 exhibits, all from the Livno area. The famous painter from Livno, Ago Pivčić, has his art gallery in the old town, in his old Bosnian house. He is mostly proud of the pictures that he dedicated to the nature and architecture of Livno. 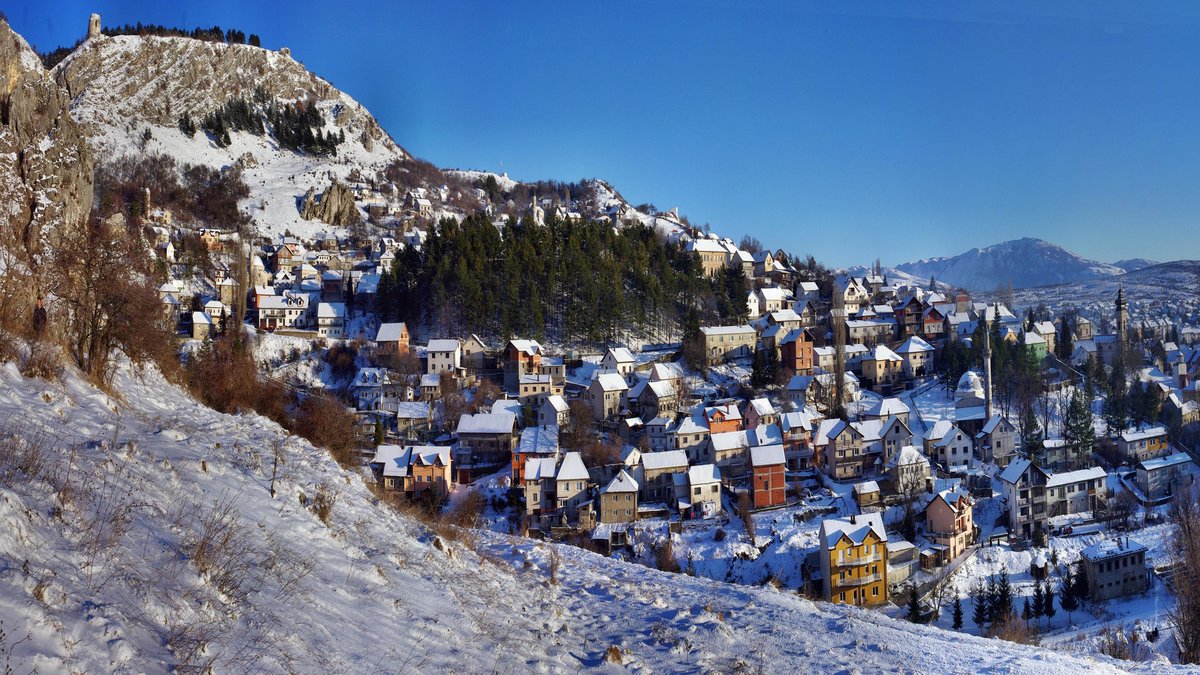 Livno, town as a paradigm of the entire country.

What does it mean that everyone can be a museum curator? As the founder of the museum, Izet Kelje Alić, used to say: “Use your own knowledge and imagination to understand the breadth of meaning of the exhibits. If still confused, ask me then”.

The museum was founded in 1989. in the private garage and tinsmith workshop, owned by Izet Kelje Alić. The idea came up by some respectable Livno community members that knew Kelje. They said to him that he as a tinman should check the roofs and other house parts of the people where he comes to fix. After what Kelje started to ask people where he would come to sell him, or give him old precious materials. Most of them were given to Kelje because they knew what he was going to do. Kelje, at that time, was known as a meticulous craftsman and a person who loves the city of Livno. Therefore everyone had so much trust in him to give their old precious things. Kelje was always passionately showing the museum exhibits and often he used to say: “The museum is not just for me and it’s not just mine, but it’s for Livno and Bosnia & Herzegovina ”. Izet Kelje Alić is the perfect example of how the “old town mentality” functions and how the passion and respect to the city and the community is important. 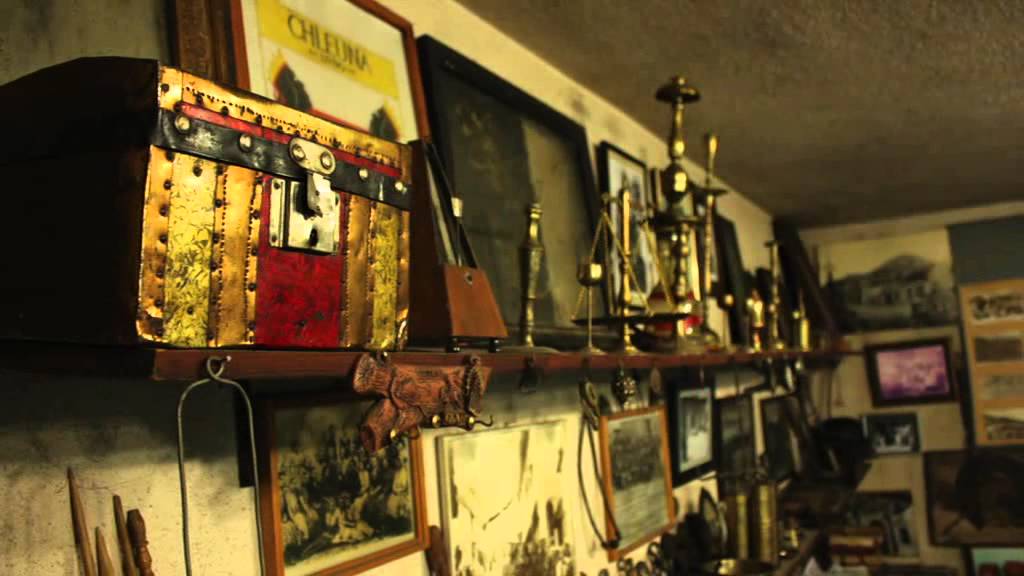 The "Old Town" Museum of Alić family keeps the ancient secrets of the Livno region.

Unfortunately Izet Kelje Alić passed away a few years ago, but his son Almir Alić continued where his father stopped. His son is continuing the tradition, while many tourists from all around the world are visiting the museum. This is not all because lots of politicians, writers, ambassadors, school groups, students and many others are coming to the museum “Stari Grad” Livno.

The unique thing about the museum “Stari Grad” is the fact that it is literally founded in the garage, yard and the garden of the owner’s house. The exhibits date from the 5th century to the 20th century. The exhibits are very different, from the Roman and Ottoman sewage system, gramophones and records, Tito’s armchair, Ottoman sofra (Eng. dinner table), old images of the city, paintings from famous Livno artists, the Quran written in Mandarine, unique and huge city key and many others. The museum “Stari Grad” Livno offers so many different things to see. If you add to that the unique garden space and craftwork space where all these exhibits are kept, then the emotions and satisfaction will overwhelm you. The exhibits date from the Roman times, times of the Bosnian Banate / Kingdom, Ottoman Empire, Austro – Hungarian Empire and in the end Kingdom and Communist Yugoslavia. 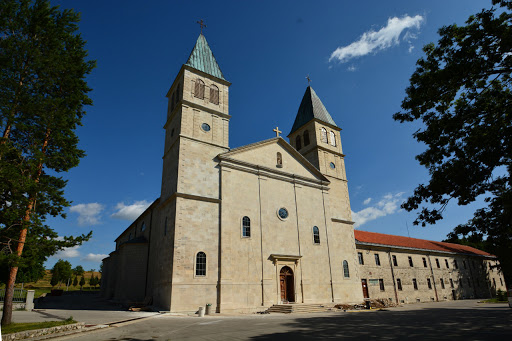 The Gorica Museum is located within the Gorica Monastery, which is a Franciscan monastery within which there is a church. This is the first and largest church built during the Turkish rule in our area.

Nowadays, the association “Čuvari Starina” Livno (Eng. “Guardians of antiquities”) are trying to improve and promote the museum in many ways. Therefore, the museum “Stari Grad” is in cooperation with the main city museum, “Gorica” Livno, and with all cultural institutions of the city of Livno.

It sounds unbelievable that one person managed to collect around 14000 exhibits in 30 years. But, if we say that Izet Kelje Alić was a person from the old town that lived the “old town” mentality, this is completely understandable. Therefore, this museum has the special vibes that will leave you stunned. Each item is telling his own story while you have even the opportunity to play some old records to have a throwback to the 50s or the 60s. Izet Kelje Alić as a tinman was in love with tin metal art. Therefore, you will also see many of his tin metal art items like flowers, characters from medieval Bosnian tombstones and many others.

Passion and devotion combined with meticulousness made this museum great.

Only Paintings provide a Long Memory, the Words are already Tomorrow Changing its Order

A guardian of Livno’s old town is one of his most famous painters ever. Ago Pivčić was born on 6th of August, 1942 in Livno. He finished pedagogical school in Sarajevo, majoring in art education. He passed the professional examination at the Academy of Fine Arts in Sarajevo in 1974. He also worked at the “Teacher Training School”, “Gymnasium and at the “National University of Livno”. Ago Pivčić is a well known person in Livno, very respected and as he likes to say he is a painter that is into realism arts. Many art critics say that Ago Pivčić is very careful with his paintings, because he inhales the souls into them. The author’s view and feeling of the people is most important. Therefore, his paintings are like a mirror into the famous past of Livno.

The Pivčić family is a native of the Livno old town, for generations. Listening to many stories from his parents, reading books about Livno and many others made Ago very proud of Livno. To sum up, those were the main reasons why Ago decided to dedicate his life to make the old town of Livno alive again. 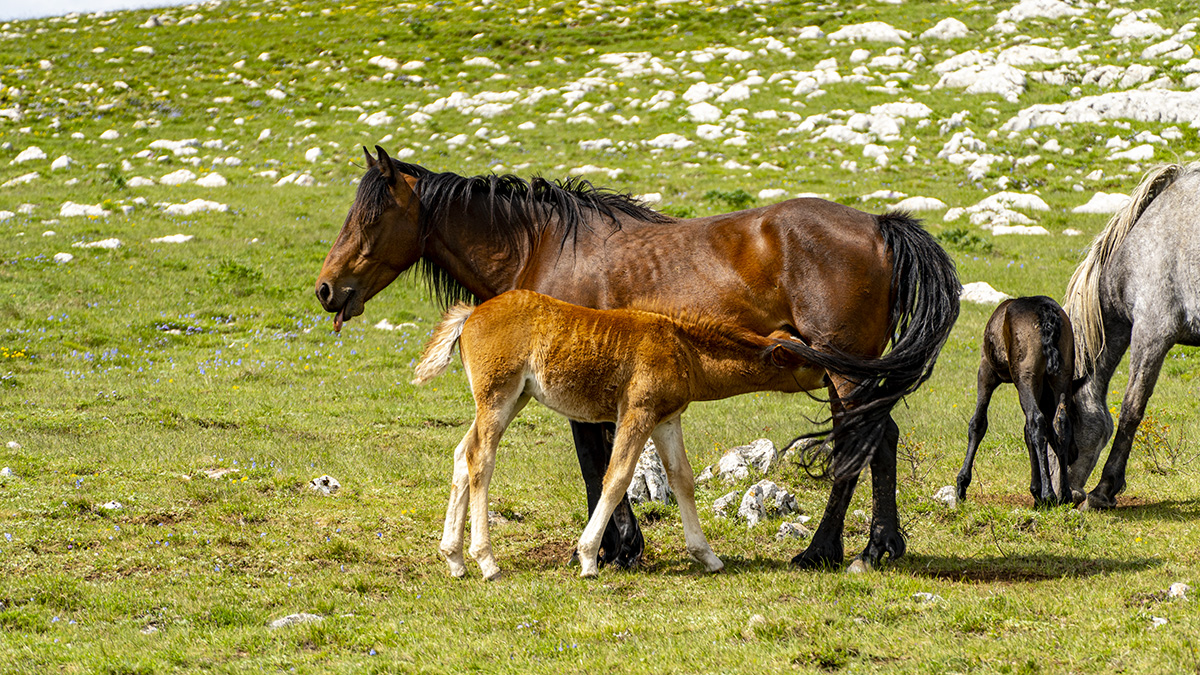 Beautiful Plateu Kruzi, only 10 kms from Livno is a home to hundreds of feral horses which are one of the main motifs of beautiful Ago's paintings.

The famous painter from Livno was very precise while he was preparing himself for new paintings. First of all he was using lots of books to read about the architecture of the old town and another thing is that he was observing the architecture from all possible angles. During the different parts of the day he was also observing the shades of the objects. Throughout the precise observations the painter managed to make the old town alive again.

To sum up, Ago Pivčić made the best possible paintings of Livno’s architecture and nature. As Ago says, he wanted to preserve the “old town” mentality and the old town architecture.

Livno as a city had its best days during the 16th and 17th century, Ottoman Empire. The city of Livno was something like Dubrovnik Republic, it had important defense walls and important Ottoman architecture. Livno had 5 towers, 2 main fortresses, 1 Ottoman court, 1 Ottoman armory, 1 hamam, 14 mosques and many others. With 14 mosques this small city had most domed mosques in Bosnia & Herzegovina after Sarajevo. The old town of Livno is surrounded with water, in such a tiny area there are three sources of water. The first two are actually called by one name, Duman (Eng. Smoke / Fog), the third one is just below the old tower called Vejz Kula. The third water source is called Skoza (Eng. Goat).

Duman is named because the huge water amount makes fog and the Skoza source because it’s next to a steep cliff, where goats even nowadays climb to get salt and grass.  The source of  Duman is the birthplace of watermills, where people were producing many things such as flour, wool and many others. One side of the river Bistrica, where the water mills are situated, is called Begluk and the other side Prikorika.

Just by names you can know that Begluk was the part where Bosnian bays used to live and enjoy and the other side Prikorika (Eng. Across the river) was the working “water mill” class. This is not all, because in the area of Prikorika used to be a beys home and mansion. That was the home of the Firdus bay family, one of the most influential families in Bosnia and Herzegovina. 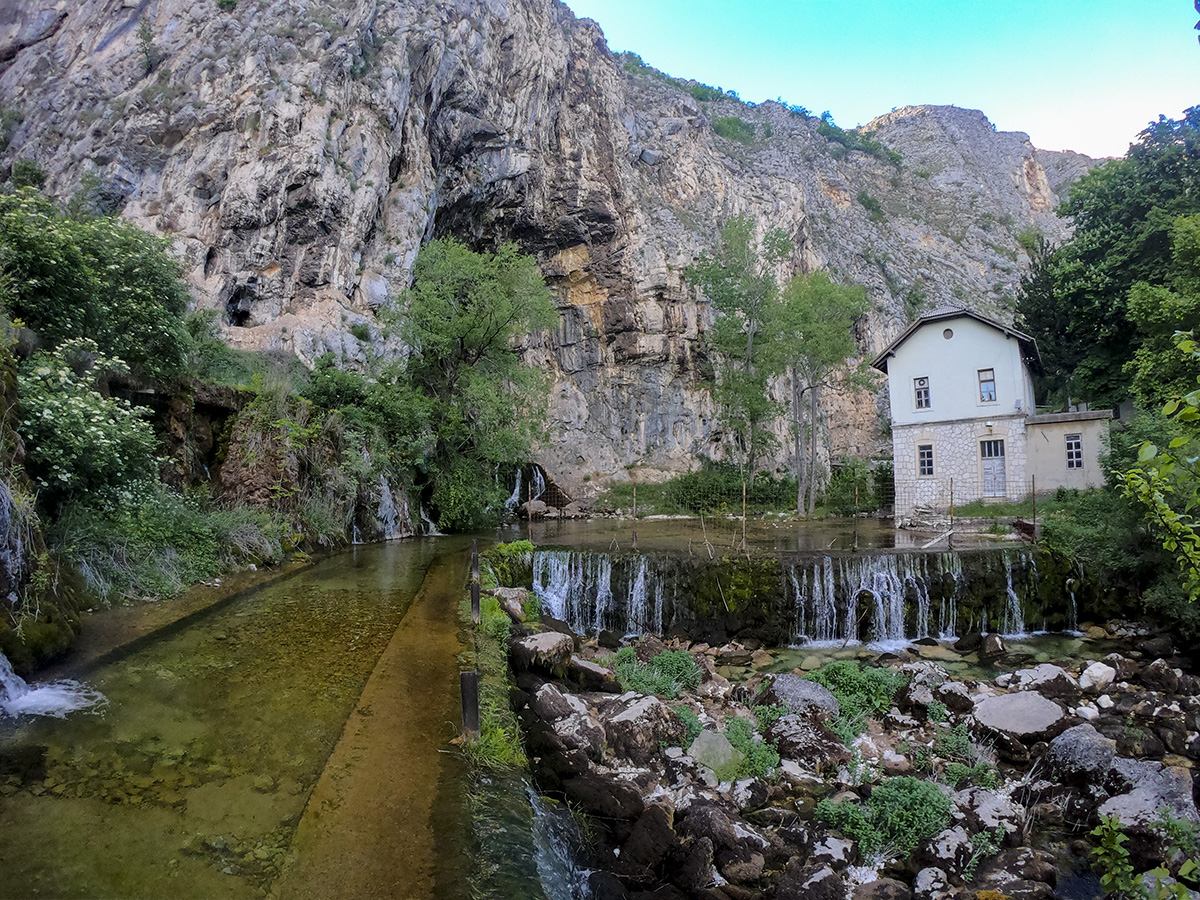 West Bosnia is a treasure trove of historical heritage
PrevNext
Start WhatsApp Chat
1
24/7 Assistance
Let's talk about the Balkans!
Thinking of Balkans? We are the experts!