Lukomir is a stunning village located above 1.500 meters above the sea level which makes it Bosnian highest and the most isolated mountain village. The village is also known as the perfect example of traditional nomad village in Bosnia and Herzegovina. This magnificent place resembles an open air ethno museum and an absolute haven for those who are into an intact nature and outdoor activities.

Where is Lukomir and how to reach it?

Lukomir is on the back side of Bjelašnica mountain, about a 2-hour drive from the capital of Sarajevo.

There are two ways to get there. If you are interested into hiking you can start the from picturesque village of Umoljani. However, even in case you are not that much of a hiker, no worries, Lukomir is also possible to visit by vehicle. However, keep in mind that driving to Lukomir is not possible during the long and cold winters when village gets completely covered in dove-white snow. The road to Lukomir is narrow and partially macadam. However, still worth it. If you are uncertain on whether the hike or ride is better option, the answer is always almost on the side of hiking adventure. Hike is easy to medium and suitable almost for anyone, regardless the fitness level.

Lukomir – in local language “harbour of peace” is the only remaining semi-nomadic traditional mountain village in BiH dating back at least 600 years ago. The population of the village orginates from Podveležje which is part of Herzegovina. Podveležje is a plateau in the central part of Herzegovina, at the foot of mountain Velež. Due to lack of water on the plateau, during the summer, semi-normadic shepherd tribes moved to the rich pastures of mountain Bjelašnica. Members of tribes Čomor and Masleša were those who built seasonal settlements that later grew into a village.

At first there was the village known as Donji Lukomir which was about 3 kilometers away from today’s village. At the beginning of the 20th century Gornji Lukomir is mentioned as a summer village. Meanwhile, due to better connections with the rest of the country, Donji Lukomir moved to Gornji Lukomir. Isolated area helped this village remain unharmed during the 1990’s war in Bosnia. 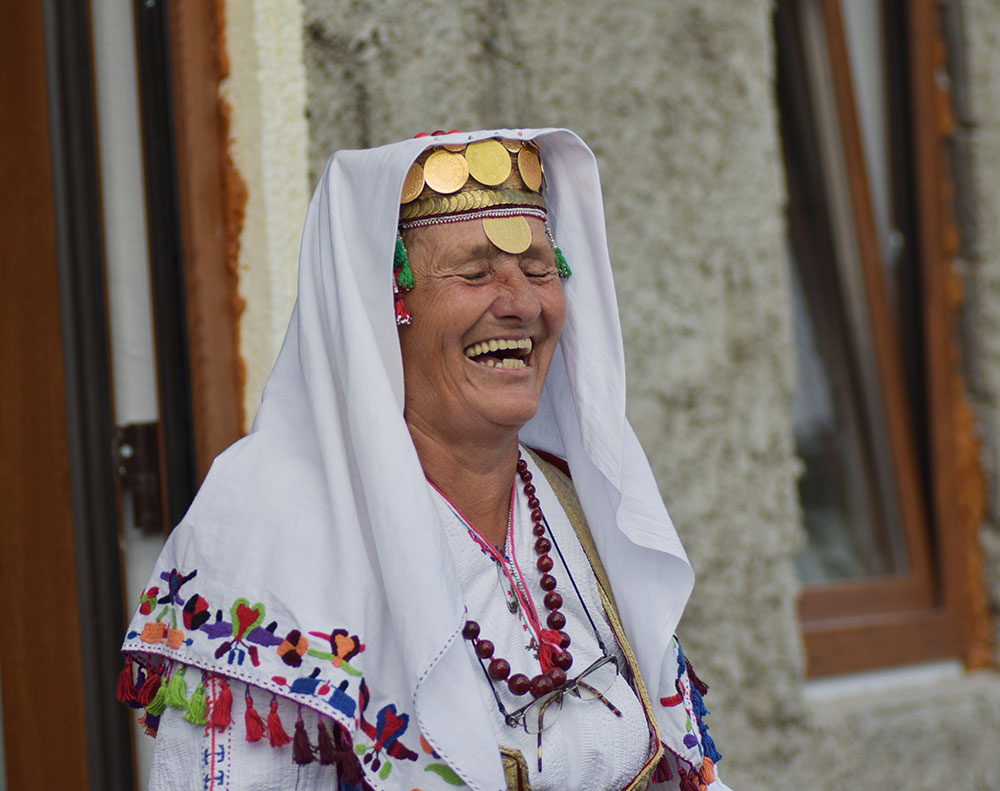 Today there are 50 houses in the village out of which are only 21 inhabited during the period from May to October. Over the winter villagers descend from the mountain, simply because of the high amounts of snow making the village unapproachable. So, just like its very beginnings, Lukomir practically remained a summer village.

If you are into witnessing spectacular winter sceneries of Lukomir village you can consider taking a snowshoeing adventure which will surely provide a once in a life time experience.

No matter what your choice is, either taking a hike or drive to the village, your first stop should be at the village Umoljani which is also a starting point if you choose hiking option. At this small traditional village you will have a chance to admire absolutely stunning sceneries and the peacefully nested charming Umoljani mosque.  There are no written traces about time of construction of this mosque but it is considered that the first wooden mosque at this exact place was built around 200 years ago. However, today’s mosque was probably built at the beginning of the 20th century.

What gives a special charm and incredible importance to this small mosque is the fact that it was a home to the world’s famous book  the Sarajevo Haggadah during the period of the Second World War. The Sarajevo Haggadah is a Jewish handwritten illuminated codex, originating from medieval Spain which is nowadays being carefuly kept in a vault of the National Museum in Sarajevo. It has been in the possession of the city of Sarajevo since 1894, while before that it belonged to the Sarajevo Jewish Kohen family.

Besides a mosque, at the very entrance to the village Umoljani, you will find a truly unique necropolis. The Umoljani necropolis is a national monument of Bosnia and Herzegovina, and is on the list of 30 medieval necropolises of stećak tombstones that were declared a UNESCO World Heritage Site in 2016. 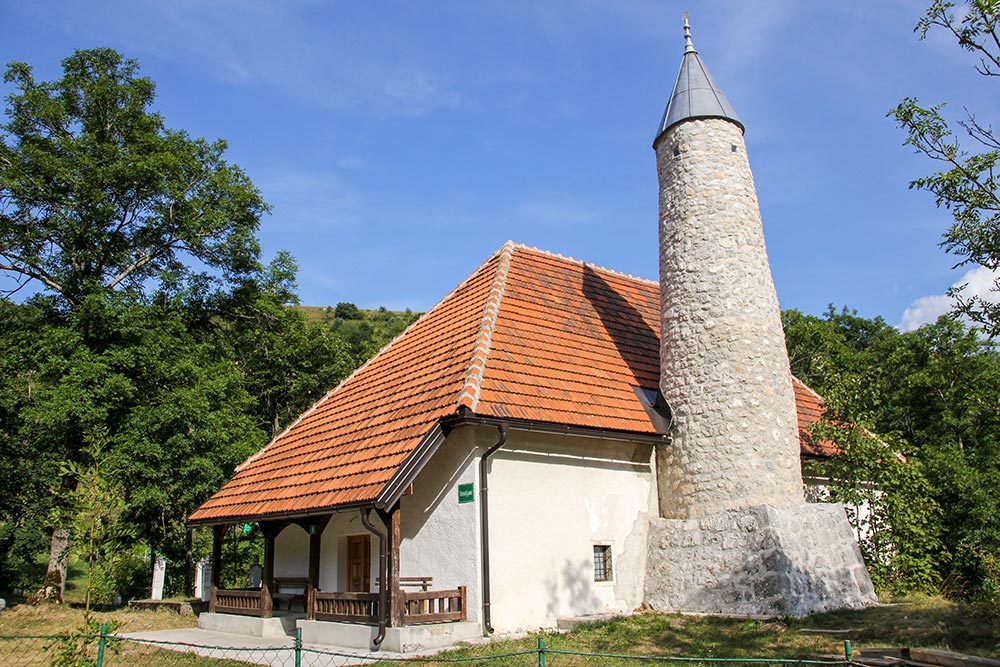 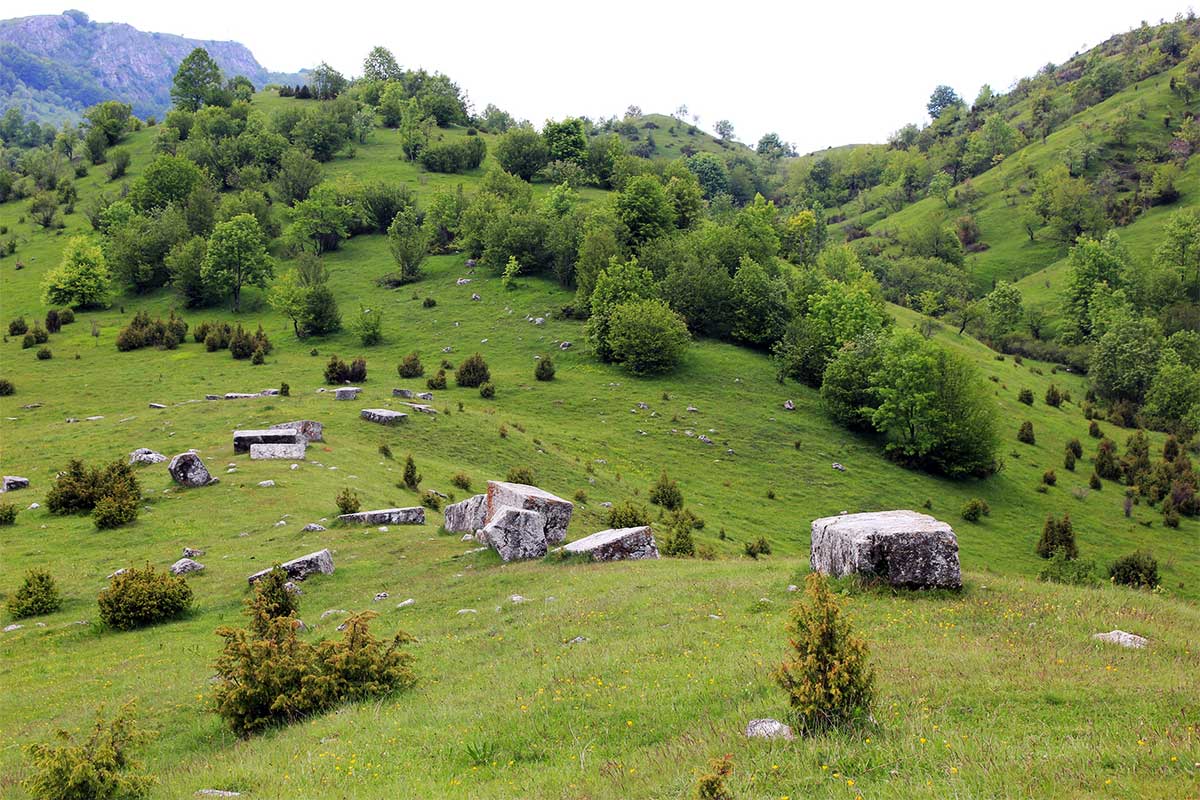 If you have finally made your choice and are choosing hiking, there are two ways to get to the Lukomir village. You can first climb to the top of the mountain Obalj and from there descend into the village while returning back to Umoljani through the canyon Rakitnica.

Obalj will provide breathtaking views over the Rakitnica Canyon and mountains of Treskavica, Visocica and peak of Bjelašnica mountain with numerous small villages in distance and vast fields of blueberries, rose-hip, certain types of mushrooms, thyme or other plant species

If you find Obalj Summit (1896m) a bit too challenging, you can simply do a round trip through the canyon. Rakitnica canyon is one of the European most remote and unexplored canyons. With length of 26km it separates massif of Bjelašnica and Visočica, and without doubt it is longest canyon in Bosnia and Herzegovina. 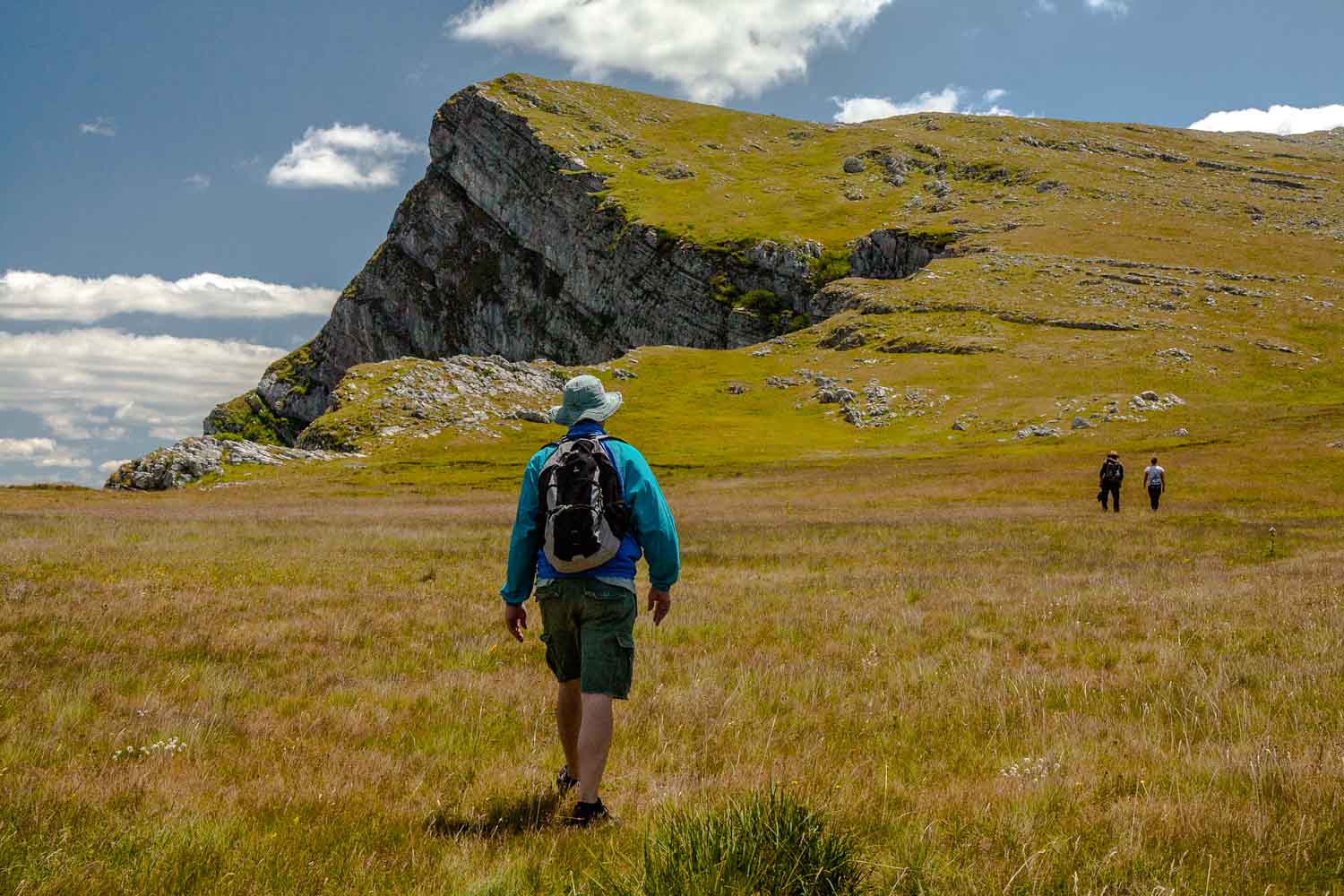 If you take a hike to the village, even though you choose an easier option that does not involve climbing to the top, you will pass through one of the most beautiful valleys in whole of Bosnia and Herzegovina, Cold Creek valley. In addition to the beautiful sceneries, it hides so many myths and legends related to the origin of the name of the village Umoljani.

According to the legend, the dragon (Aždaha) headed towards Umoljani across the valley hidden among the hills. With its tail it left a winding trail in a green valley that is today filled with crystal clear water. The locals fled to a nearby hill, from where they asked God to save them from the monsters. Their prayers were granted, and the dragon remained petrified on the hill above the valley. Accordingly, the settlement is today called Umoljani (Bos. “Umoliti” ‘of the prayers’ ). 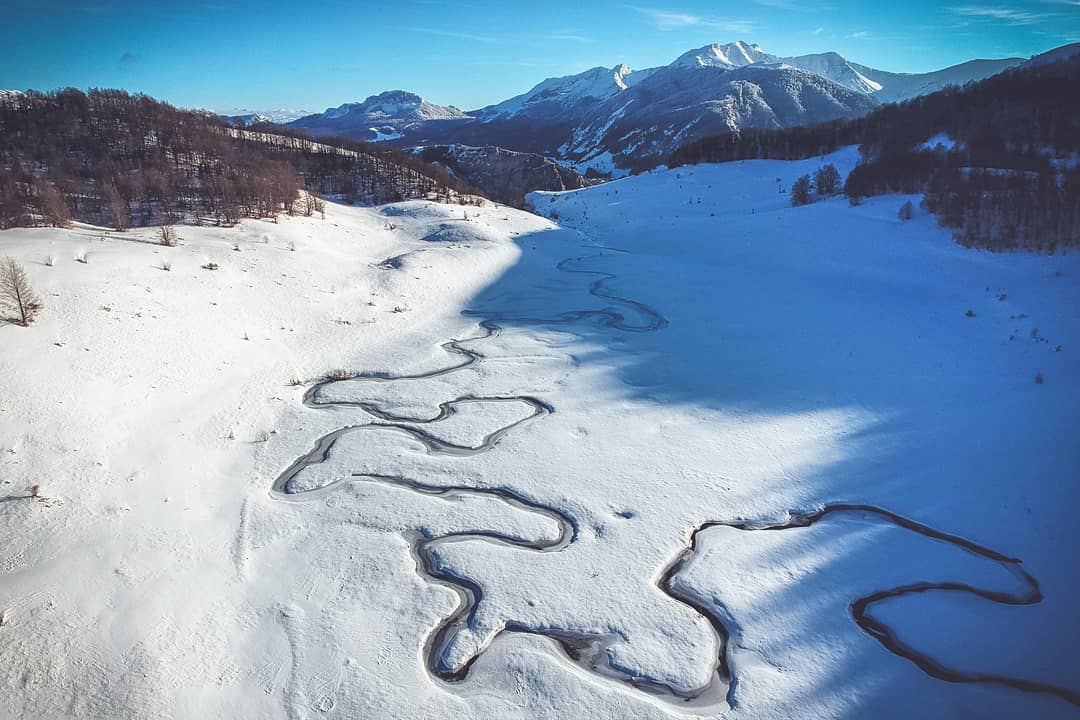 This paradise on earth can be reached from Sarajevo and Konjic. The village administratively belongs to the municipality of Konjic. It is 55 kilometres away from the municipal headquarters and also the same distance from the BiH capital.

Lukomir is unique for its stone houses that are covered with cherry wood shingles and for its traditional, centuries old and beautifully decorated, woman clothing. As matter of fact, if you want you can buy some traditional garments such as woollen socks, vests etc. And it is one of the best gifts you can bring with you from Bosnia and Herzegovina.

What will surely delight you is the hospitality of the local population. As soon as you come to the village you will be greeted with the most sincere smiles and a warm welcome. There is an abundance of homemade food and drinks waiting for you and don’t even think about rejecting it. 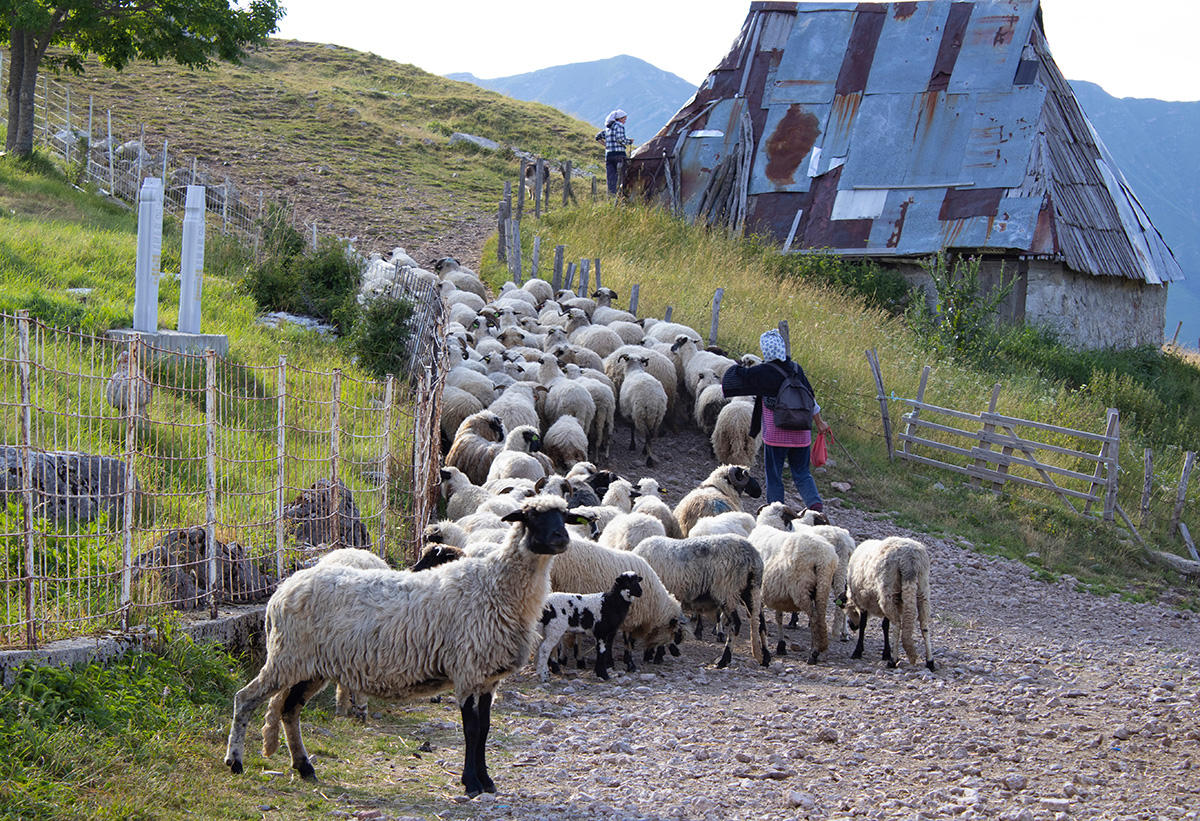 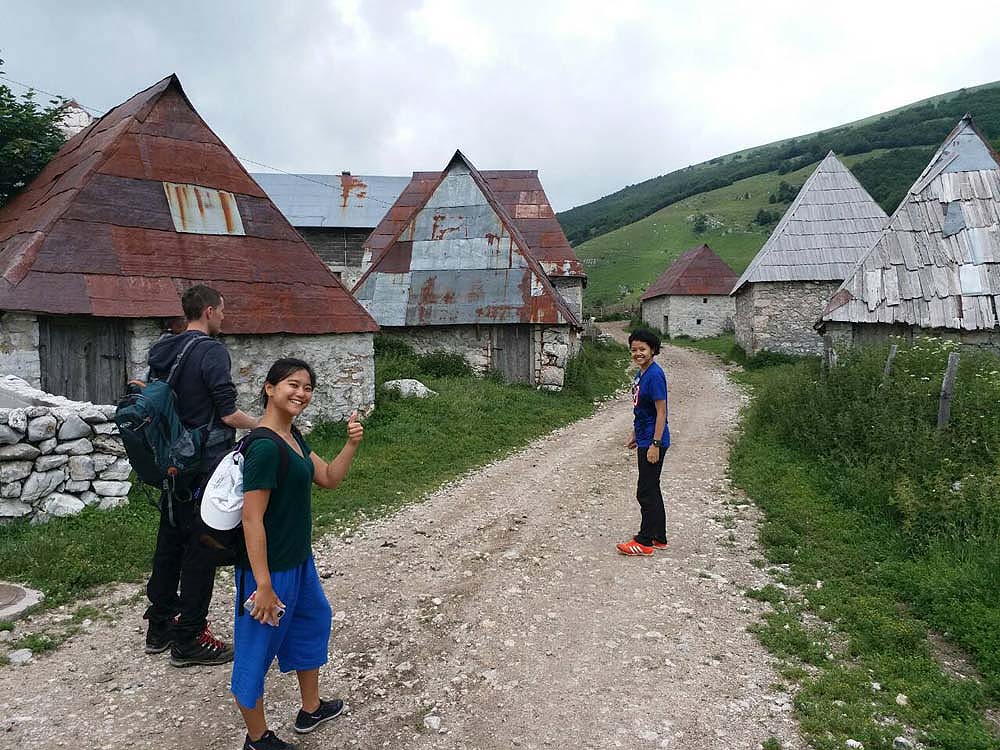 Charming guesthouse  and restaurant “Ljetnja bašta” located in Gornji Lukomir  is an excellent place if you want to spend the night in the nature. Ljetnja Bašta also offers a restaurant, bar, shared lounge and a garden. As guest you have free wi-fi connection and parking. One word, you can get the modern world luxury in a traditional setting. Therefore, if you are a nature lover and you want to spent a few days in this nirvana, then this place is the infallible choice and will  definitely make you feel as if you are at your home away from home.

To sum up, in this small but hospitable village with warm and generous people you will breathe tradition as you breathe the fresh mountain air. Through every bite of food you will be one step closer to nomadic culture and you will hear numerous stories about their lives. Untouched nature with friendly local people make a perfect combination that you will never be able to forget.