When you book with an account, you will be able to track your payment status, track the confirmation and you can also rate the tour after you finished the tour.
Sign Up
7054
12 Hours
Availability : Every Day
Min Age : 0 (suitable for anyone)
Max People : 8 persons

Traveling to holy sites of Herzegovina can provide an absolutely moving, cultural and religiously – significant experiences. From beautiful cathedral and apparition hill in Medjugorje, to majestic Orthodox and Muslim temples in Southern Herzegovina and Blagaj, all the way through the ancient towns and religions, Herzegovina Region is filled with sacred places that are important to the religions of the world.

Whether you are traveling because you have a personal religious interests or because you would like to delve into the historical and cultural influence of the religious sites, this full day trip will be an excellent way of experiencing religious sites in all their greatness and immortal beauty while absorbing their history and cultural importance and taking time for sightseeing, contemplation, understanding and finding the inner peace in serene religious gardens of Herzegovina Region.

Guide
English speaking local-expert guide and driver. Guide in different language available on request.
Free pickup on request
If you are staying in the old town of Sarajevo meet us at our office. If you are bit away from us, please let us know and we can organise advance pickup.
All Transfers
All tour transfers are provided by Funky Tours.
Entrance Fees, Taxes & Flexible Cancellation Policy
No hidden costs. VAT 17% included in the price. Cancel 1 day prior for full refund or change dates anytime.
Availability
Tour is available throughout the year.
Group Discounts
For bigger group bookings, discounts are available.
Online Payments
Pay safely online with a credit card. We accept payments for all types of credit cards.

Insurance
Travel insurance is not included. Please buy it at home country.
Guide Tipping
Tips are not included in the tour costs. If you receive excellent service, please consider tipping.
Shared Tour
All tours are shared, unless specifically booked as private.
Food
Typical lunch cost is around 8-10 EUR per person. 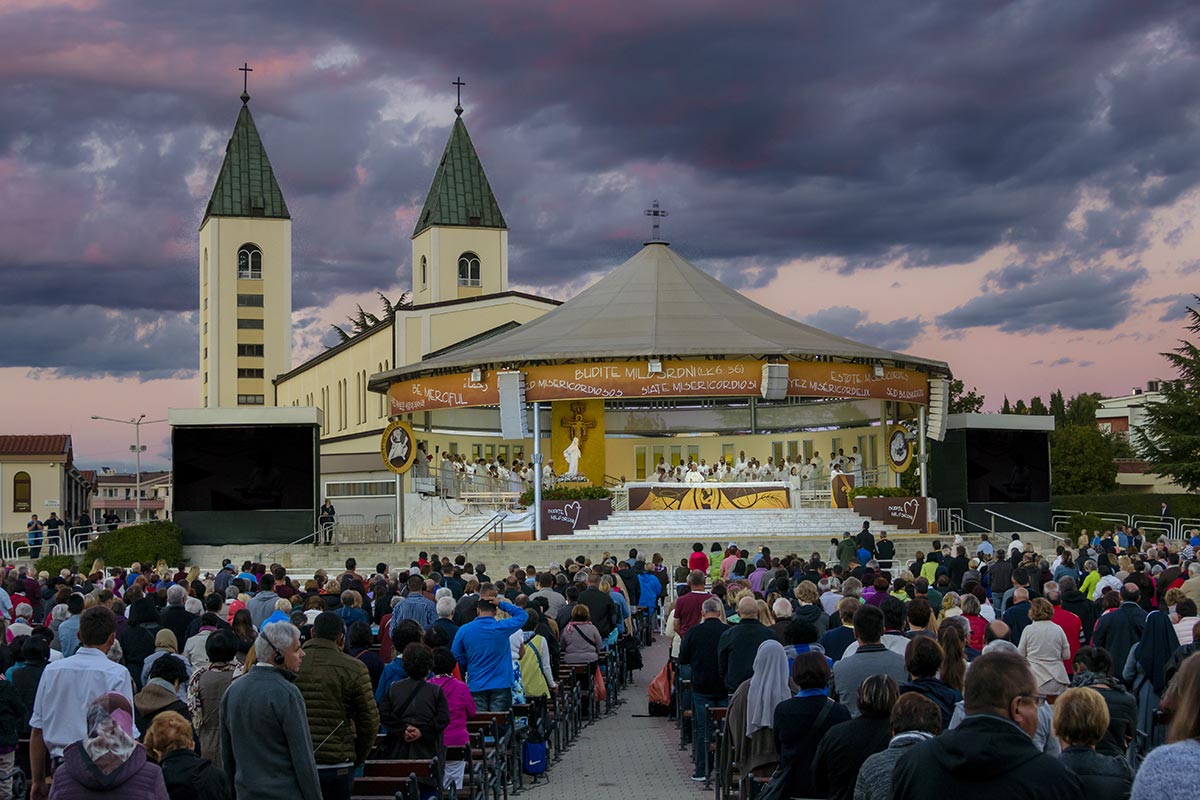 First part of the trip will be a scenic ride through suburbs of Sarajevo and after one hour, we will enter Herzegovina, beautiful mediterranean climate region of Bosnia and Herzegovina.

On the way we shall go through Konjic, Jablanica, Neretva valley together with Jablaničko Lake, and lastly through Mostar, which will be our stop in the afternoon on the return to Sarajevo.

Once we arrive to Medjugorje we will take a walk around the town and visit the St. James Church.

In the end of the June 1981, from 24th until 26th, at the hill called Crnica, near the place called Podbrdo, six children have witnessed apparitions of Virgin Mary. They prayed and spoke with Our Lady.

With the messages: “I have chosen this parish in a special way and I wish to lead it.”, “Peace, peace, peace – and only peace! Peace must reign between God and man and between men!”, the hill Crnica, today called Apparition Hill has become the most important pilgrimage site for Catholics in this part of the World.

Those who are interested will have a chance to do 20/30min hike up the hill, to the Virgin Mary statue and enjoy the serene moments on their own. 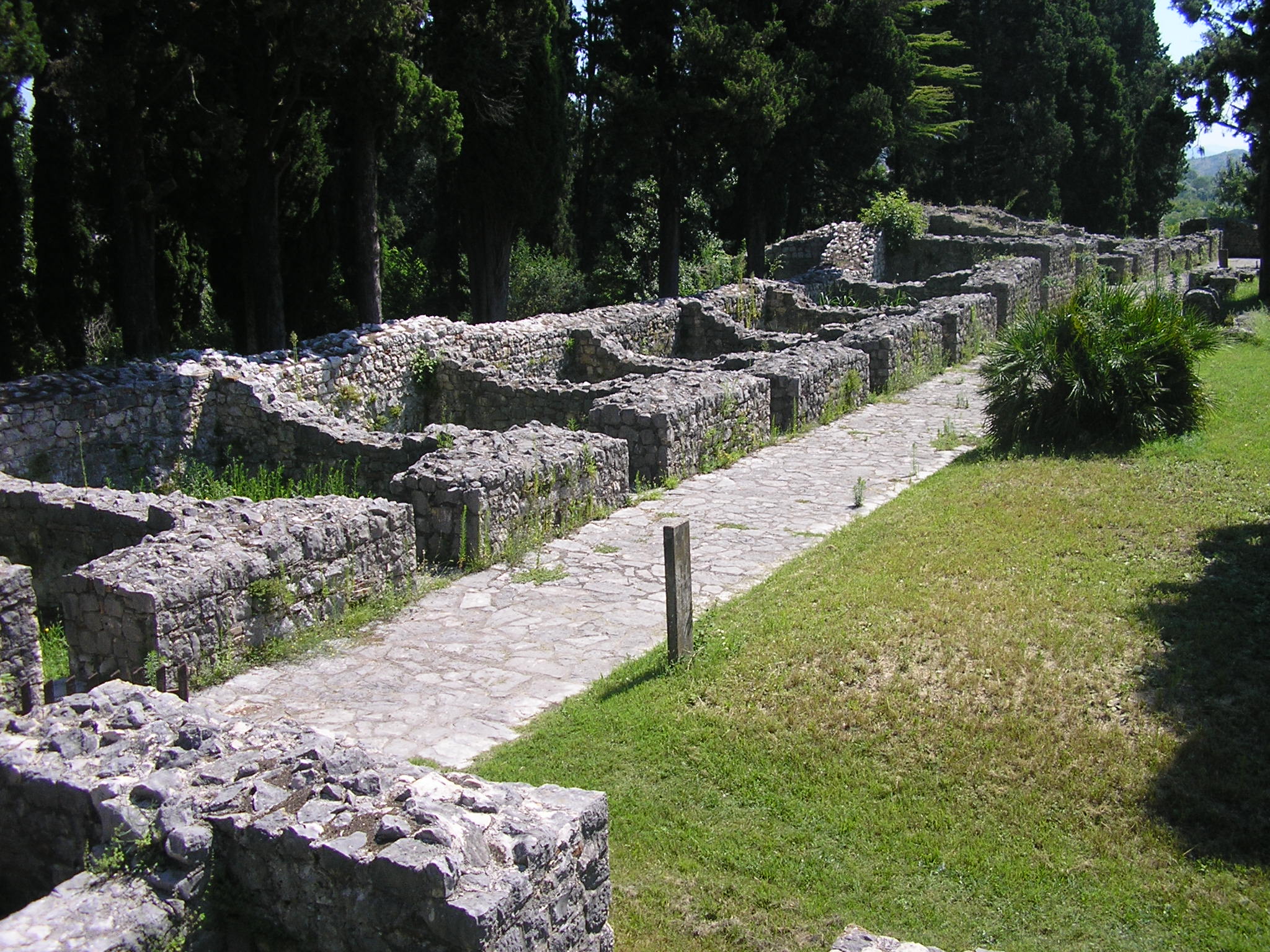 Our next destination will be Capljina and Mogorjelo. Mogorjelo is a unique archaeological monument from Roman times located near Capljina. This cultural monument is one of the most beautiful buildings of late ancient architecture in the entire country.

Archaeological excavations have shown that the construction complex consists of several phases with the oldest buildings dating from the 1st century when the site served as an agricultural center (villa rustica fructuaria). Roman Fortress (castrum) was built on the ruins of this building, which burned down in a fire in the 4th century.We will take stroll through complex of ancient corridors, admire the constructions and colect the fracutres of past times. 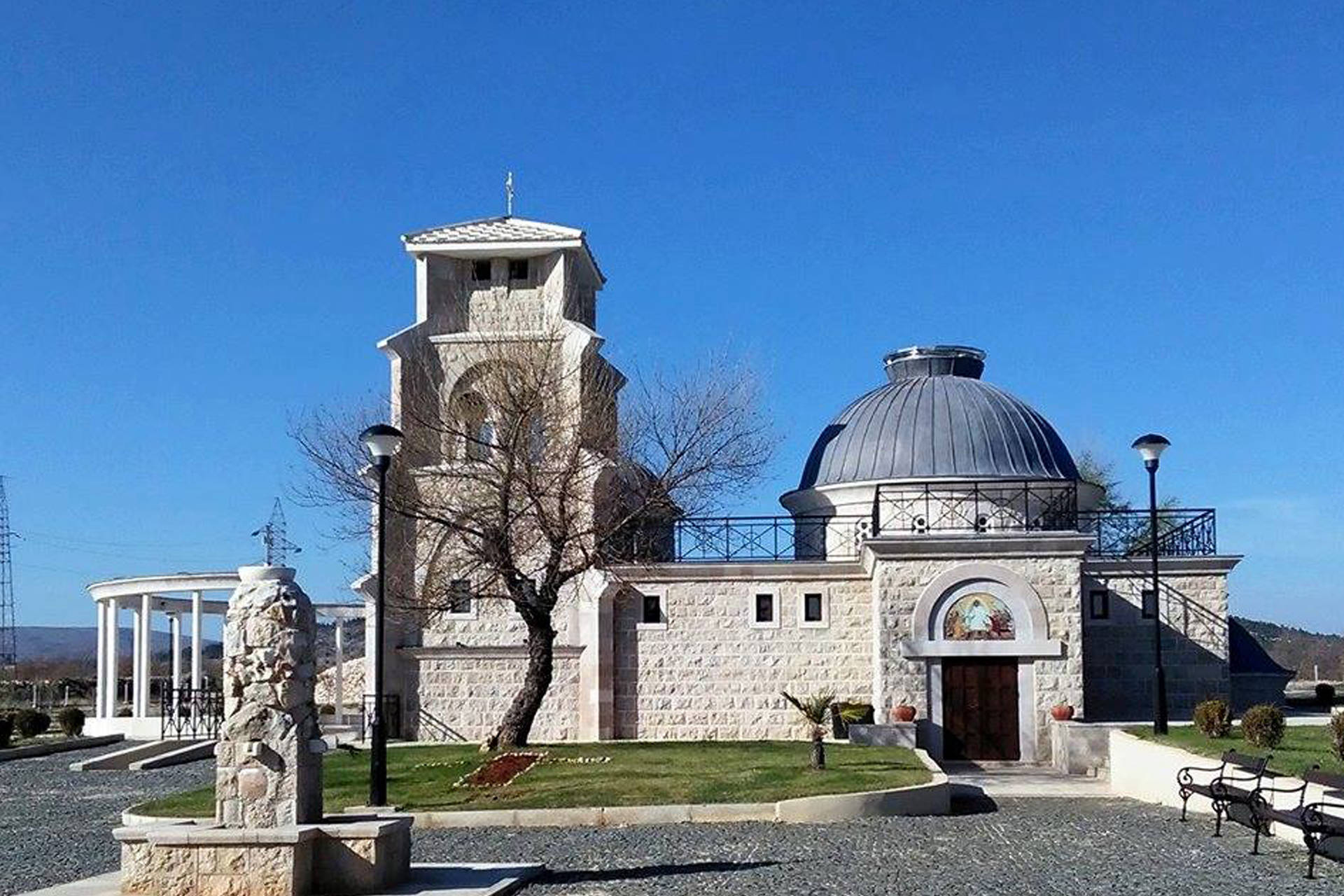 Church of the Synaxis of Serbian Saints and Martyrs

Prebilovci is a small village near Capljina which was first mentioned in 15th century. Before the World War II this village had over 1000 inhabitants while, nowadays, it count no more than 50. During the Second World War, on 6 August 1941, around 800 civilians among which 650 were women and children were taken away from their homes and thrown into natural pits around that area. Their bones were taken out of the pit and placed in the crypt of the church that was built in 1991 just a year before the War in Bosnia and Herzegovina.

According to a research done by the Japanese Asahi Shimbun paper, Prebilovci is a village that suffered the most in Europe during the WWII.

We will meet the local priest and learn more about this charming Orthodox church which is the only one in the country with a grandiose amphitheatre and whose beautifully colourful design is meant to celebrate life not death. 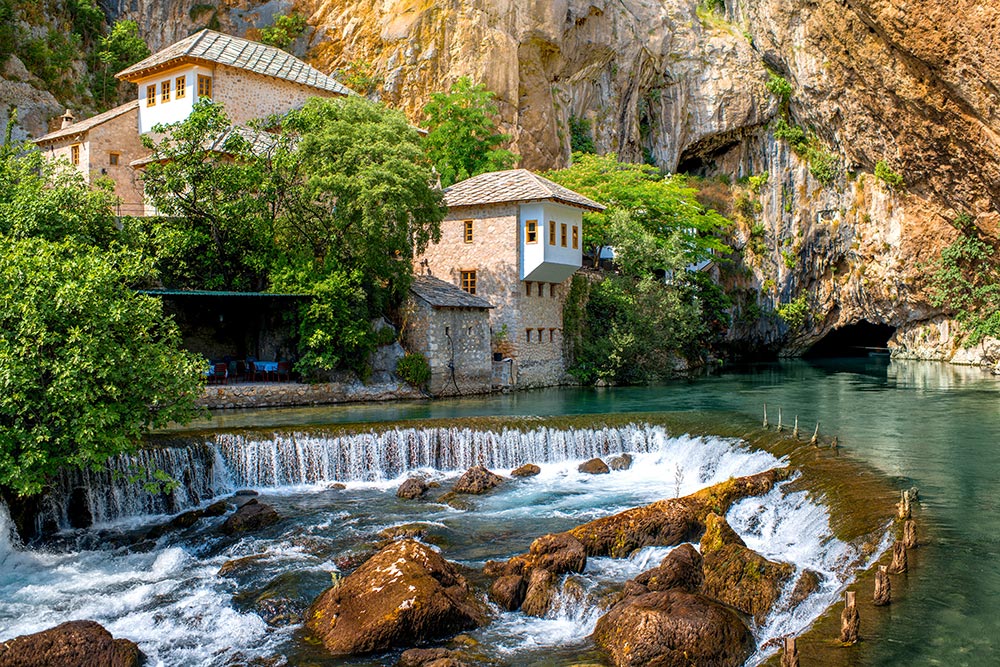 Blagaj town is home to Buna river spring – Europe’s most beautiful, most powerful, clean and drinkable karst river spring, settled beneath few hundred meters high rock. Water comes out of quite large but stunningly deep cave, which springs amazing 43 cubic meters of water per second. Can you imagine this?

Just next to the spring, under the rock, is home to Blagaj Tekke – Dervish house, dating most likely pre or early Ottoman era from early 16th century, as unique sacral-residential example of Islamic architecture in Bosnia and Herzegovina.

Visiting this complex and learning more about Dervish life in Herzegovina as important part of our history is, MUST DO.

Due to famousness and cleanliness of Buna river the most important thing to taste in Blagaj today is local trout. That is why we usually enjoy a lunch break here while enjoying amazing scenery of Buna river spring and Dervish house next to it. 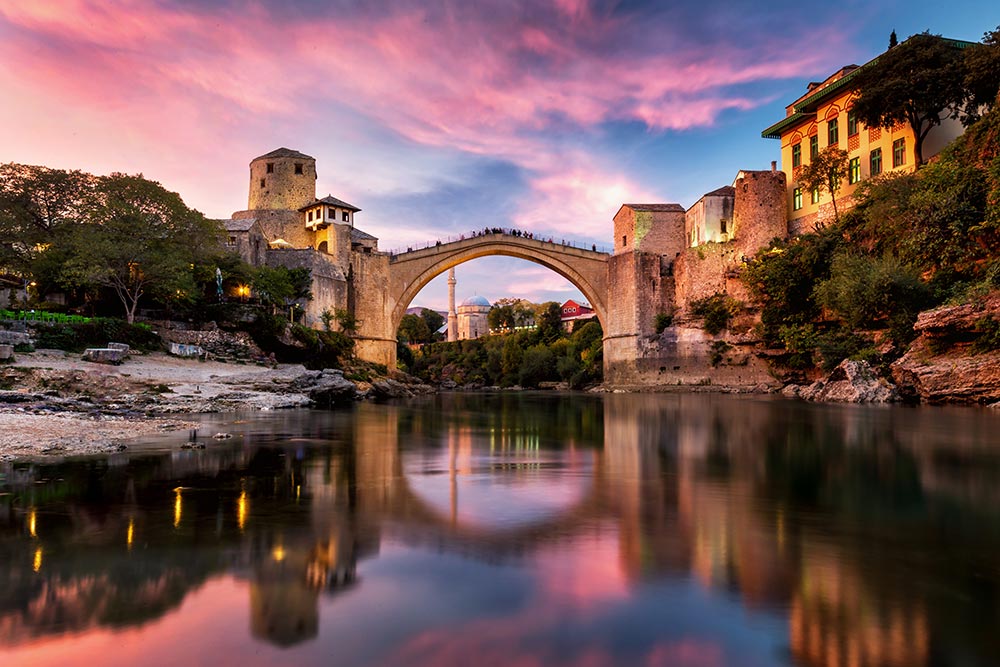 Mostar Old bridge during the sunset

It will be an afternoon when we arrive to Mostar which is the most beautiful time of a day to take a leisure stroll in cobblestone streets and admire the sunset over the Old Bridge. We will do our 1.30h walking tour, which will focus on Mostar’s Old Bridge, Old Bazaar and Old Town, but offer stories of Mostar’s uniqueness, in regard to historical and cultural diversity.

Story of Mostar will be about the Bridge, it’s rise and fall, and how it had risen again. You will learn about Siege of Mostar, about why it is called Mostar, about “Mostarians”. We recreate Mostar for you and with you.

Sunsets are amazing time in Mostar, so we can consider to have drink at place overlooking the bridge panorama and discuss more about everything we did today. When Mostar is done, it is time to go back to Sarajevo, and it will be two hours journey before we are “home”.

If you feel you need more then few hours in Medjugorje, perhaps you can consider our 2 Day tour from Sarajevo to Dubrovnik (Kotor or Split) with overnight either in Mostar or Medjugorje.

If you are travelling from Sarajevo to Mostar without intention to come back to Sarajevo, this tour is ideal way to replace bus and explore places in between and in the end of the day being dropped off at your address in Mostar without extra costs apart the tour itself.

If you need this service, please note that in your booking form.

Visit to the Kravice Waterfalls is not included in the itinerary but can be easily added. Additional costs: 10 EUR per person.

Those of you who are into discovering and tasting the exceptional and worldwide known Herzegovinian wine please feel free to contact us so we could include the wine tasting in your itinerary. Additional costs: 15 EUR per person.

Herzegovina is a home to over 40 different winemakers

Church of the Synaxis of Serbian Saints and Martyrs

Mostar Old bridge during the sunset

2 travellers are considering this tour right now!
Start WhatsApp Chat
1
24/7 Assistance
Let's talk about the Balkans!
Thinking of Balkans? We are the experts!