When you book with an account, you will be able to track your payment status, track the confirmation and you can also rate the tour after you finished the tour.
Sign Up
5960
6-7 hours
Availability : Every day
Pristina
Pristina
Max People : 8

The full day tour of Pristina with Gracanica Monastery and Ulpiana Ancient city will enable you to explore and understand the country and its capital in depth.

From the ancient times and Ilirians, to the new age of dystopian Utopia under the disguise of multiculturalism and recent conflicts, we will delve deep into understanding the history and origins, pride and prejudices while taking a stroll in the turbulent streets of Pristina, wandering the serene garden premises of Monastery in Gracanica and walking the paths of ancient civilisations in Ulpiana.

This is a full day tour that is created to start from Pristina but do not hesitate to contact our team in case you would like to visit Pristina from any other place in Kosovo or even further, beyond the borders.

Pickup Time If starting from Pristina, recommended departure is 9 AM.

Pickup Locations We shall pick you up from your hotel.

Activity Note: This is a private tour that is created to help you understand Kosovo and its long historic journey from the ancient times all the way to its independency and current issues the country is dealing with. The tour is physically not demanding, and is focused on nice and easy explorations of city of Pristina with the nearby monastery of Gracanica and Ancient Ulpiana city which we will be reaching by the vehicle.

We will meet you at your address in Pristina after breakfast. The recommended starting time is between 9 and 10 AM.  Your guides will be local Kosovars who will make sure you get just the perfect insight from the local perspective.

Our team will meet you at your address in and will make sure to provide the best possible travel experience you had so far while slowly introducing you into complex Balkan’s history and unrivalled nature beauty. 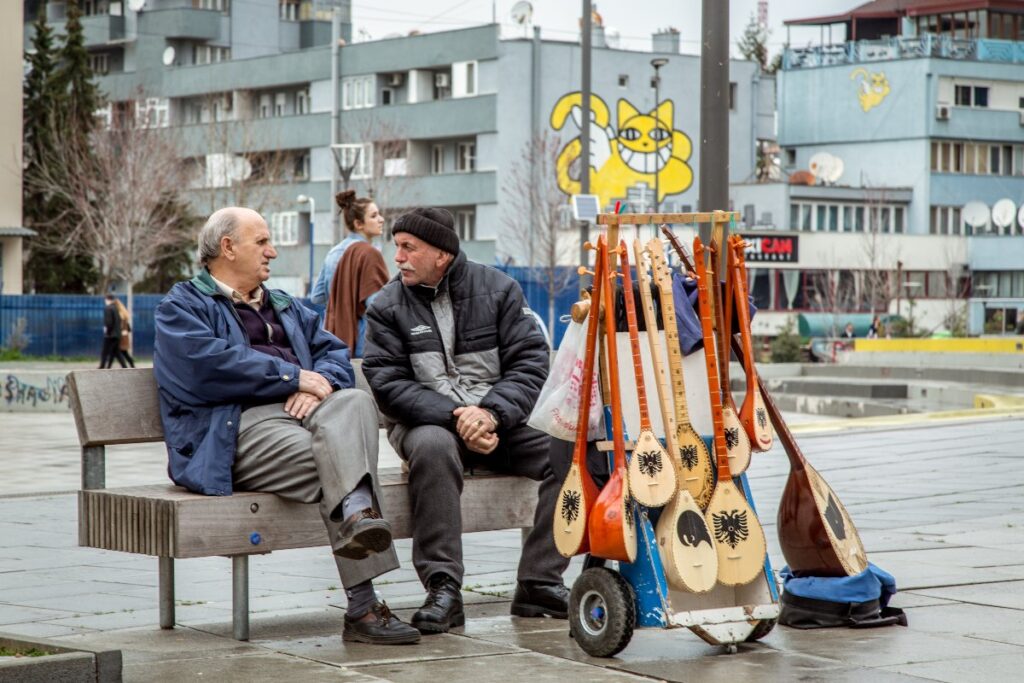 > No matter how many sights do we include, Pristina and its people are the sight. Visiting Pristina is necessarily experiencing and observing the current culture more than its sights. During this trip, we will make sure to pay attention to the locals trying to make a living, engage conversations with local salesmen and observe the frantic sounds of cranes and heavy machines.

In order to make sure you are getting this story properly, and being a valid participant in it, before we start with the walk, we will need to show you the world where the world’s acceptance is an urge almost as the air we breathe.

Our first stop will be the Kosovo National Museum. This beautiful ochre colour building was built in 1898 by the Austro Hungarians and for the purposes of the Turkish army. Until 1998, the museum was a home to an incredibly rich prehistoric collection which most of which was spirited away to Belgrade during the recent war.

Once we are introduced to the remarkably rich ancient history of Kosovo, we will follow the Kosovo steps, throughout the turbulent history all to its hard-earned independence. We will end our visit at the room symbolising the pride and all of the prejudices this recently born country went through. At the exhibition room, we will have a chance to witness the original independence declaration embraced by the flags of all the countries that were brave enough to recognise Kosovo’s independence.

On our way out, we will witness the impressive 10 square meter mosaic portrait of Mother Teresa which is made entirely of 1.5 million staples. 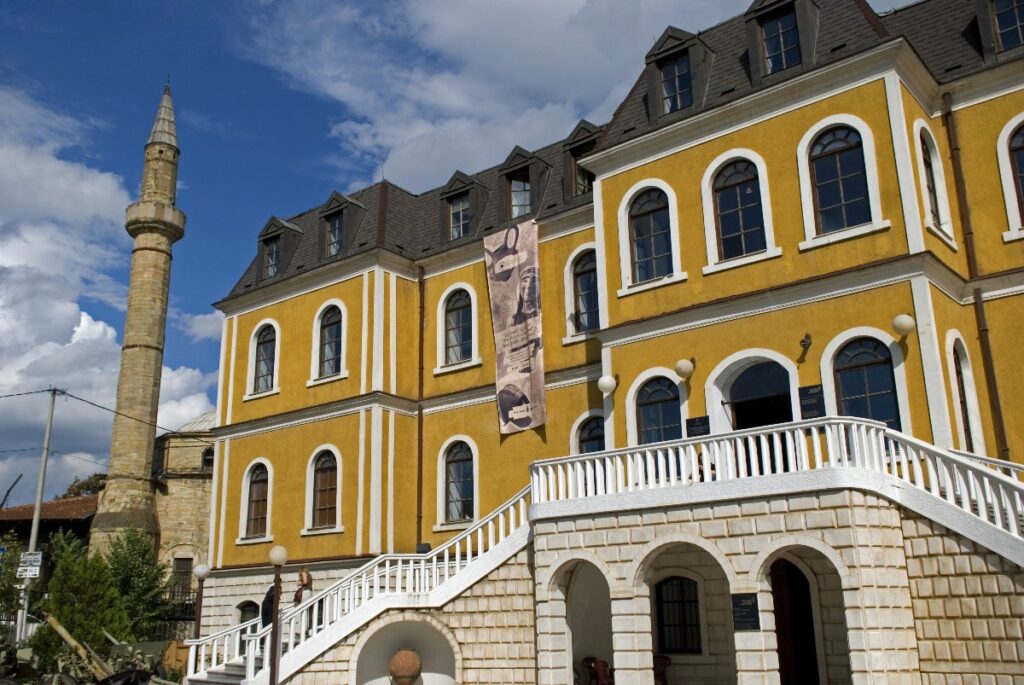 > The museum is a proud exhibitor of the extensive archeological exhibit containing the items back from the Illyrian, Dardanian and Roman periods.

After roughly an hour and a half at the museum, we will continue our walk and, only few steps away, we will encounter the beautiful Imperial Mosque of Pristina (Xhamia e Madhe).

We will walk its premises and explore the remarkable interior and exterior while hearing the local legends and stories, including the one about Pjeter Bogdani, Albanian author and member of pro-Austrian movement back in the 17th century. During the Austrohungarian times, this mosque was turned into the church and was a burial place of the Bogdani. After the Ottomans regained their control his bones were exhumed and thrown into the streets of Pristina by the Ottoman soldiers. 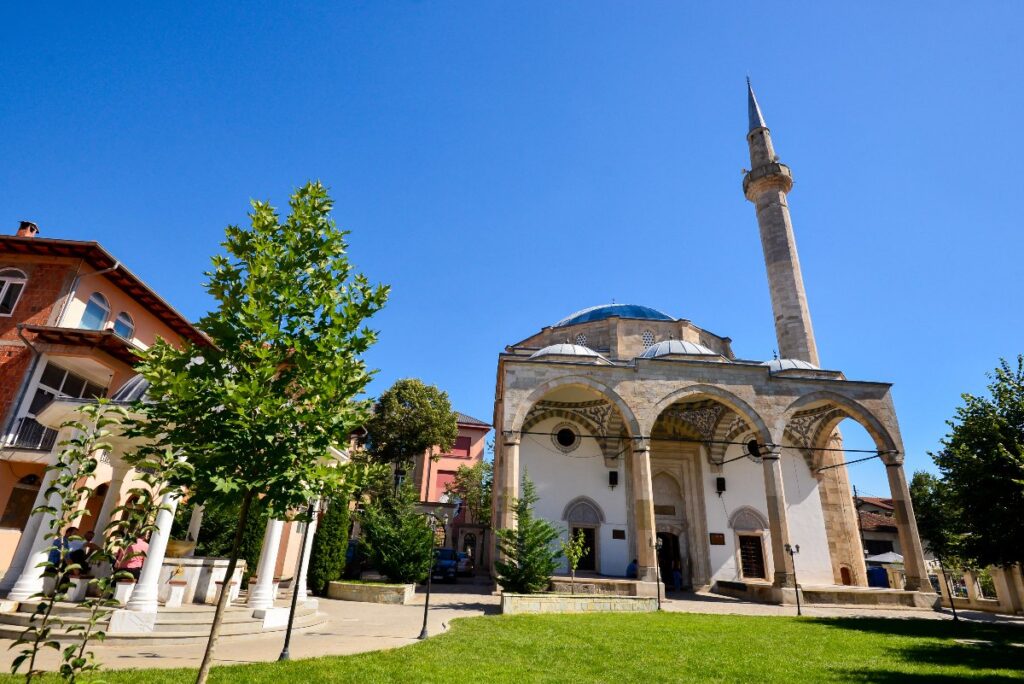 > Built by Sultan Mehmet II Fatih back in 1461, this mosque was declared a Monument of Culture of Exceptional Importance in 1990 by the Republic of Serbia.

Our next stop will be another representative of Kosovo independence and Pristina’s most photographed landmark – The Newborn Monument. The typographic sculpture NewBorn was unveiled on a day when Kosovo gained its independence, 17th of February 2008. Ever since then, every year on the independence day, the look of the monument, the colours to be more precisely, are being changed reflecting the current modern days issues and struggles.

Next to the NewBorn Monument, we will find another art installation, Heroinat. Heorinat consists of 20 000 pins representing an Albanian woman. Each pin depicts one woman raped during the Kosovo war. 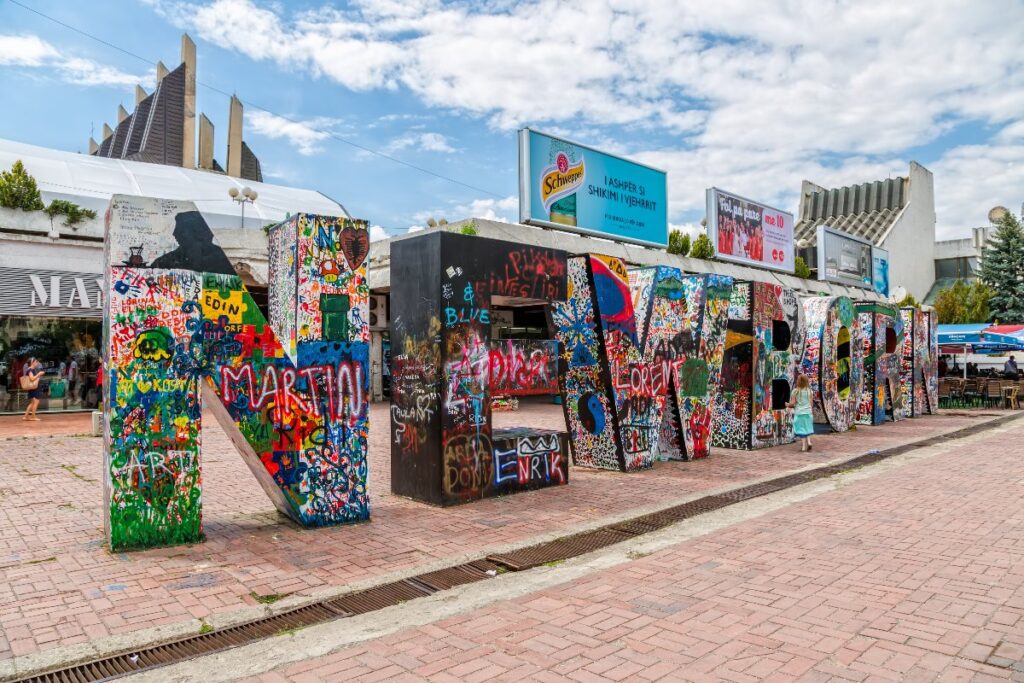 > The original monument was yellow with blue banners representing the colours of European Union. However, ever since then, the colours of the monument are changing every year on the independence day.

Enthralled by the daily lives of the local people, especially those trying to make a basic living on Pristina’s bustling streets, we will walk through the famous Mother Theresa Boulevard and encounter the grandiose National Library in all of its majesty and controversial appearance.

Whether you love it, or hate it, this amazing socialist era brutalist expression with its 99 domes of different sizes and completely covered in a lattice of fence-like metal will surely leave no one indifferent. 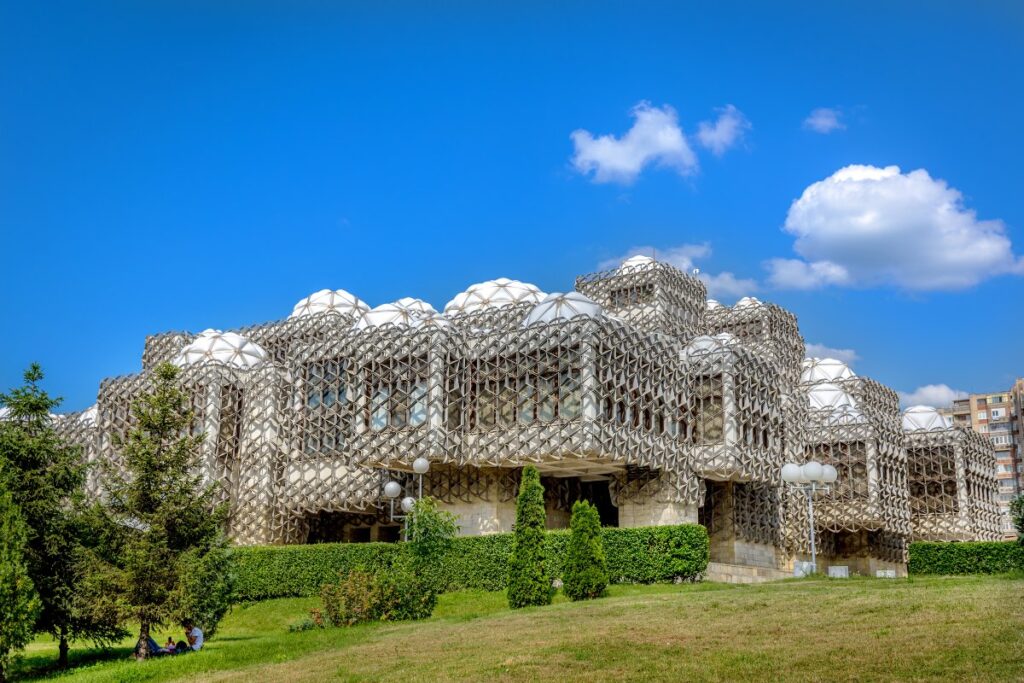 > While the library brought many controversial between Kosovars including Serbian politicians connecing the domes of the building with the national Albanian hat “plisi” other find this building to be a part of the reconciliation project between Serbians and Albanians and connecting its domes as a combination of Turkish baths in Prizren and Patriarchate of Peć.

Although, according to the architect himself, the style was meant to blend the Byzantine and Islamic architectural forms, and regional traditions with a rural architecture, this building brought up so many discussions over the years.

Another building complimenting the contraversity of the city is surely an Orthodox church which never seen its final completion. Recognisable by its red brick without a facade, cement domes and a huge golden cross at the top, Church of Christ the Saviour never seen its light and is very often brought into the negative concept of the Milosevic’s regime. 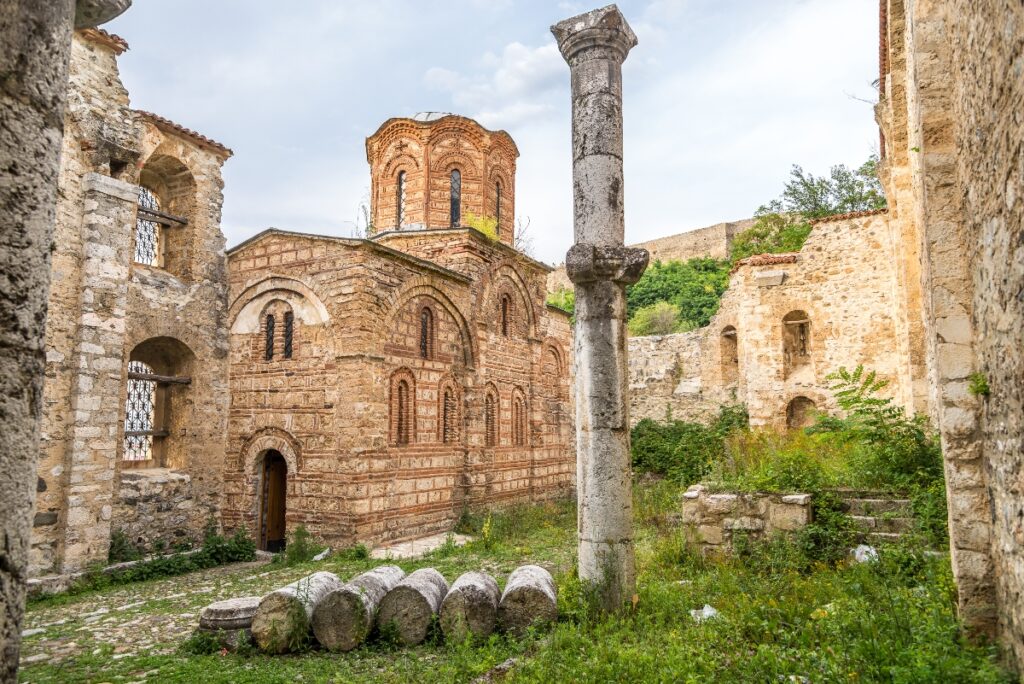 > Just on the left side from the National Library, we will encounter with the Christ the Saviour Church whose construction started in 1995 under the auspices of the Milosevic regime and was halted by the Kosovo war.

We will climb the 250-foot bell tower offering and enjoy the 360-degree views of the capital while discussing the Kosovo’s religious groups, minorities and majorities over the thousands of years of history. 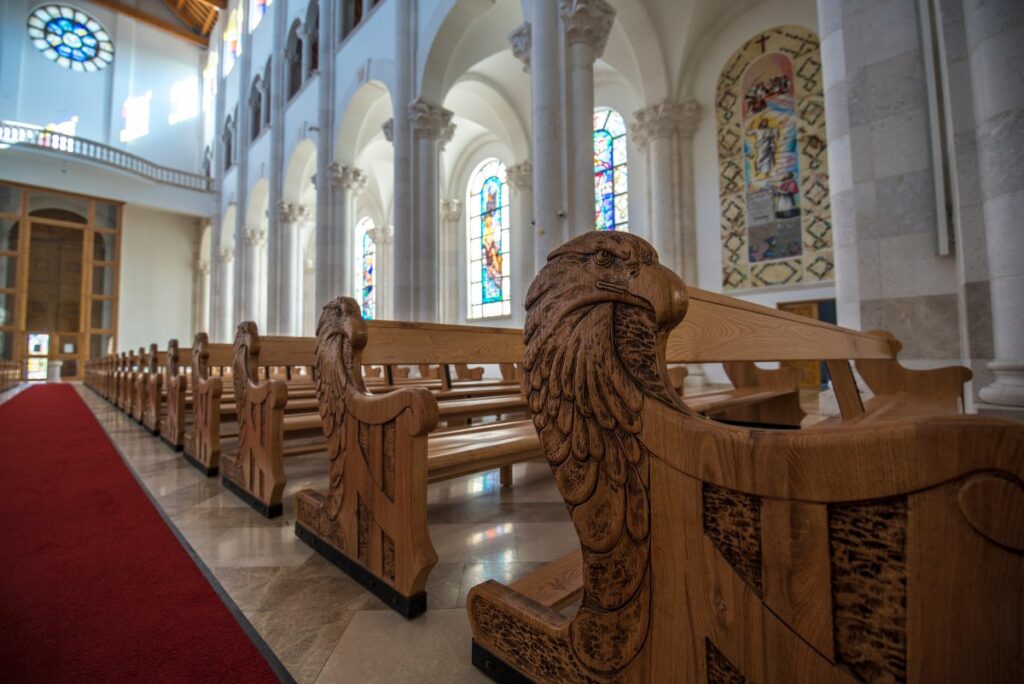 > Unlike the other cathedrals you can find, this new-renaissance Italianate style building is unique and, sometimes questioned, for containing symbols and decorations such as the Albanian Eagle, Skanderbeg and ex-president Ibrahim Rugova.

Our next stop will be a stop at the statue many people might find absurd or even ridiculous. However, Kosovars love Bill Clinton who is credited for ending the war in Kosovo and gaining independence.

In his honor, Kosovaras have decided to regard him with a 10-foot tall statue and, on the top of that, name the entire boulevard after his name (Bill Clinton Boulevard). We will end this walk with a silent observing the concrete hustle and head to our vehicle. 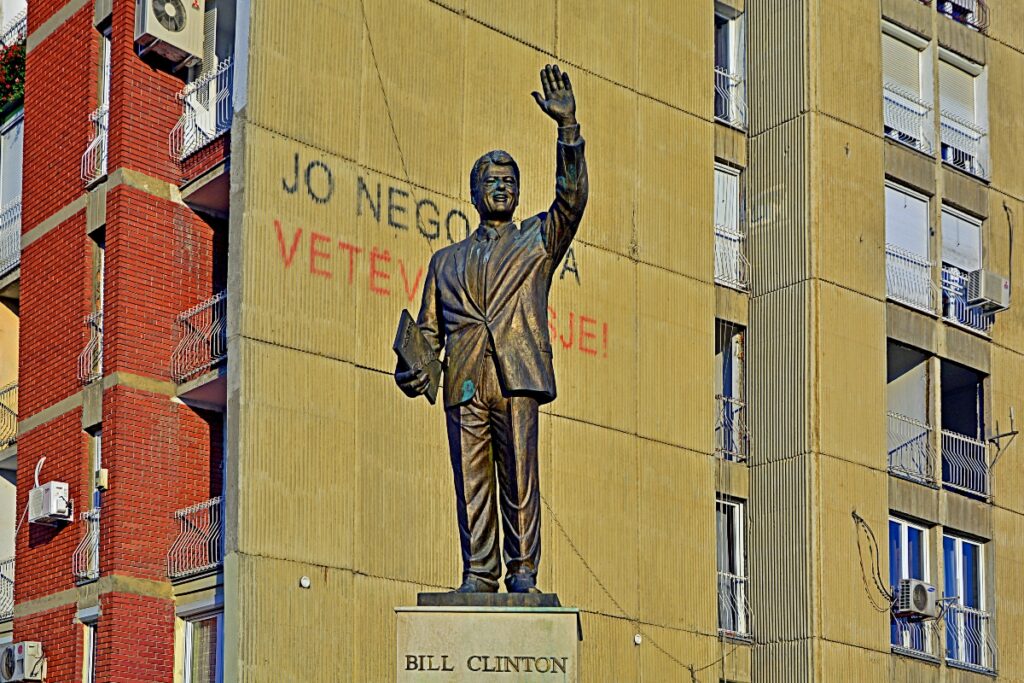 > Next to the statue, we will see the graffiti of the slogan “Jo negociata, vetevendosje,” which translates to “ No negotiations, self-determination,”  used by a political group in Kosovo that is not in favor of foreign aid.

After the city tour of Pristina, we will continue towards the grandiose Gracanica Monastery, one of the most important Orthodox symbols that found its home in Kosovo.

Roads from Pristina will slowly guide us through the narrow suburbs and introduce us to the legends of peonies. Depending on the time of the year, we might even have a chance to witness the red peonies typical for Kosovo fields. Whether you choose to believe these are the symbols of Serbian battles, losses and victories, one will hardly be indifferent to the vast space of this blood-coloured flower fields. It is believed that red peony is an endemic species formed from the white peonies which were soaked in blood of Serbian heroes.

Gracanica Monastery is a very fondly treasured among not only Kosovo Serbs but each Kosovar, and is considered a jewel of Serbian-Byzantine art in Kosovo. The recognisable  green settings of this magnificent medieval church will lead us during the walks.

The monastery went through a tumultuous past over the centuries but, on the good side, it was spared by the last war. Protected by Kosovar police, Gracanica Monastery is today a home to numerous priceless frescos carefully guided by the nuns who, in addition to their monastic duties, are also engaged in embroidery, agriculture and icon painting. 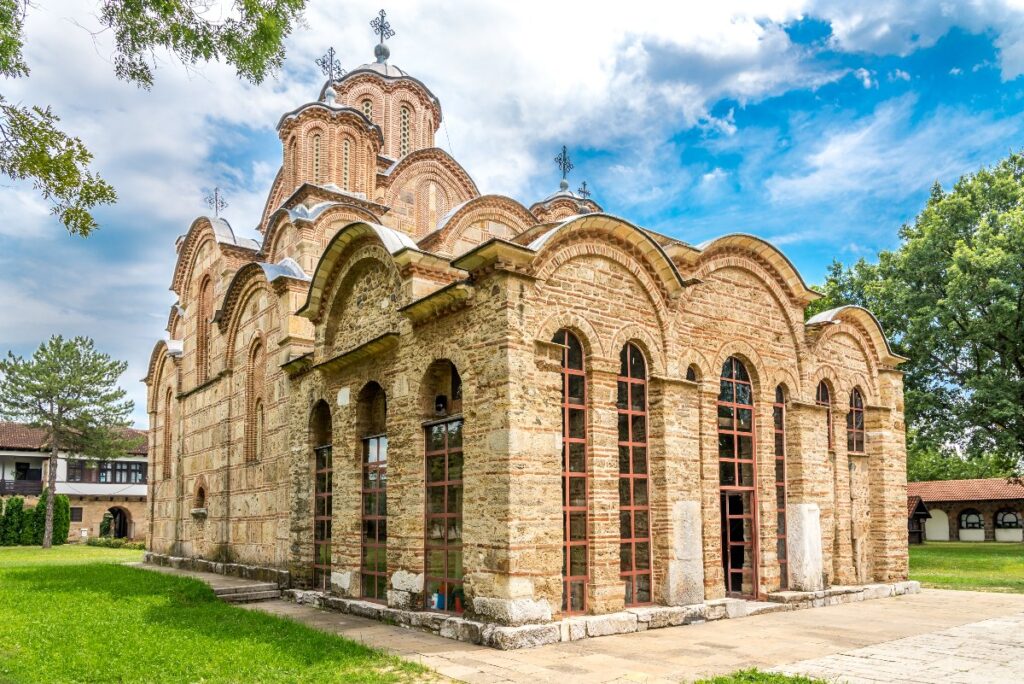 > Founded by a Milutin, king of the Nemanjic dynasty in 1321, this monastery has been listed as one of the four sites in the country that is listed and protected by UNESCO. The monastery is the second most important Orthodox site in the territory, just after the Patriarchate of Peć.

Ulpiana Ancient City: Back to the Origins

From the Orthodox heritage to the Albanians origins. Many consider the ancient Ulpiana inhabitants as Albanian ancestors. On the right side between Gracanica and the charming village Laplje Selo, nestled on a vast area of green Kosovo field, two and a half meters underground on the surface of 120 football fields stretches the ancient city of Ulpiana.

We will witness the remarkable remains of ancient Ulpiana whose outlines are slowly coming to light thanks to a team of Kosovo and international archeologists. Due to the heavy earthquake, life of Ulpiana became only a travelogue seen through the ancient walls and stories.

We will take a walk and follow the giant stone walls telling the story of ancient civilization and its amazing organisation of life in such a distant time. 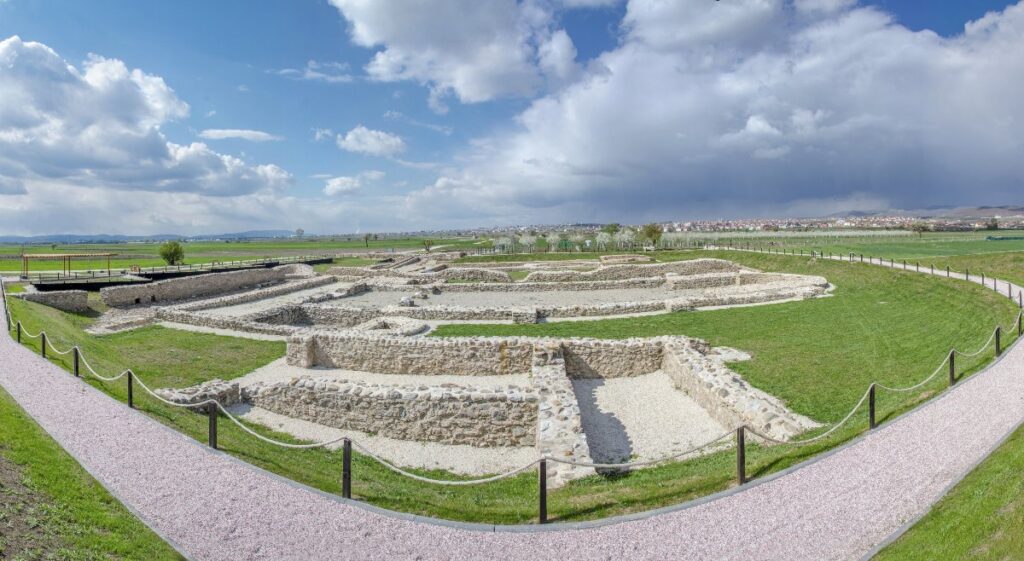 Once we are back from our time travel, we will head for a our last stop and visit a local family of Kosovars at their home and have a home-made lunch. Forget about the restaurants and fancy dishes, our hosts will introduce us to the real local food, the one Kosovari grandmas used to prepare years ago.  We will  treat our palates with stuffed peppers and sarmas, spicy sudjuk, warm, pillowy flat bread, fresh cheese and vegetable tavas, salads.

Most importantly, we will raise the curtains of the ordinary life in Kosovo, meet the real people and hear the real stories. 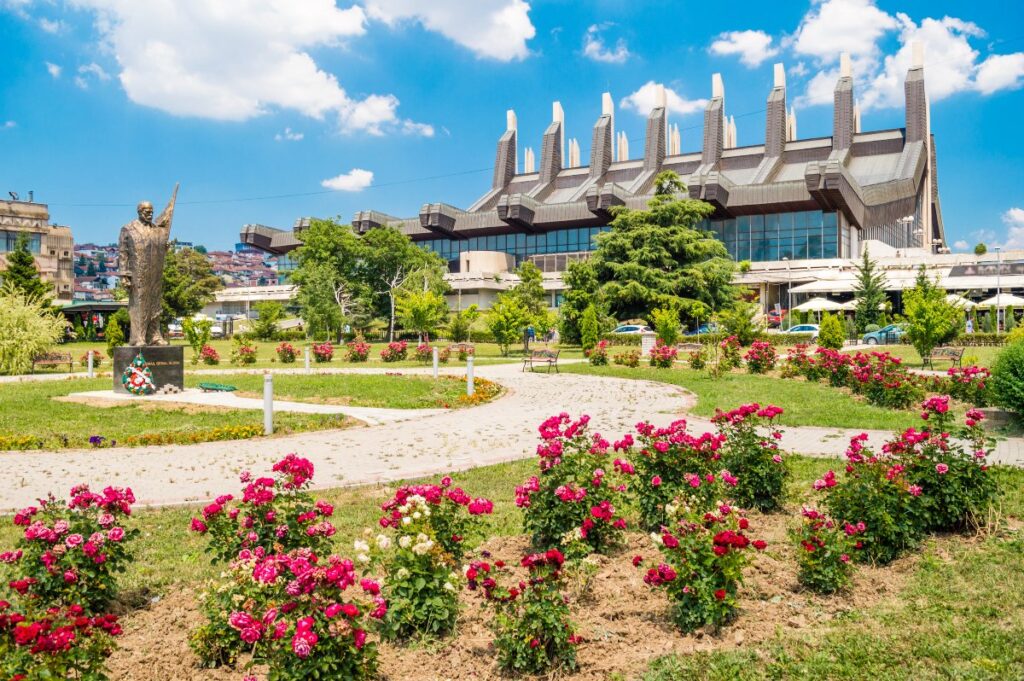 > Pristina Youth Centre
Founded by donations from countries and NGOs from all around the world, Pristina is a city that is still under the transition and heavy reconstruction. Independent Kosovo is still writing its pages in modern world history books pages and we will make sure that, at the end of this tour, you feel like a small part of its newly created narrative. 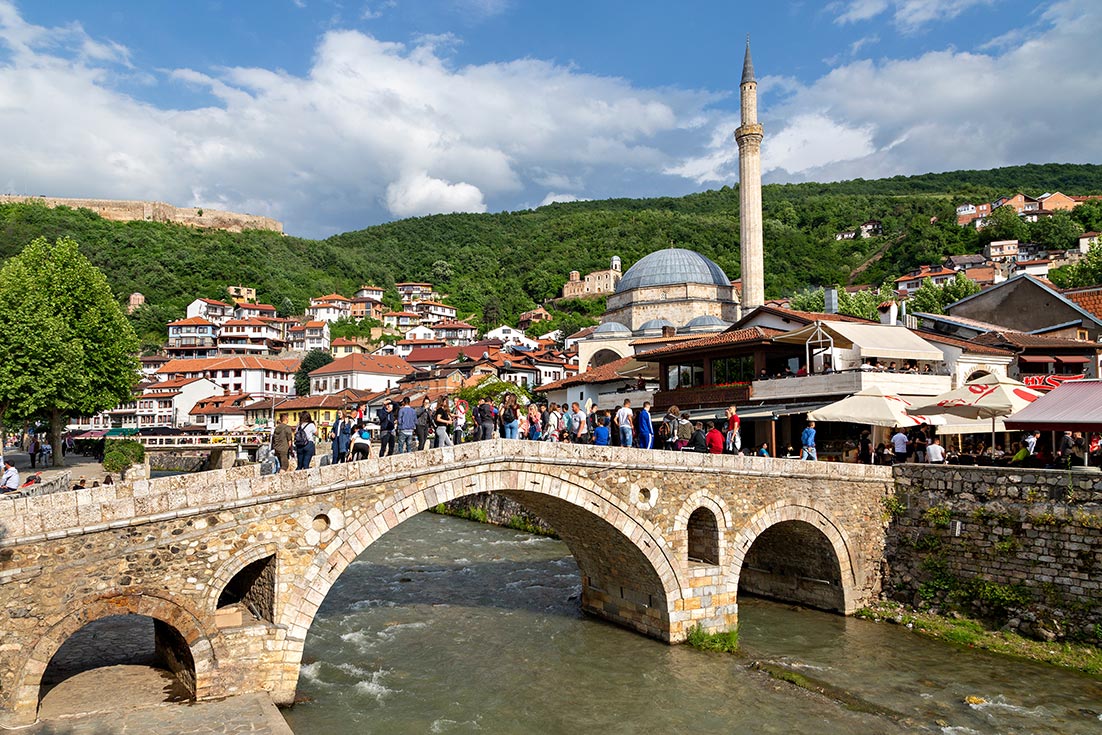 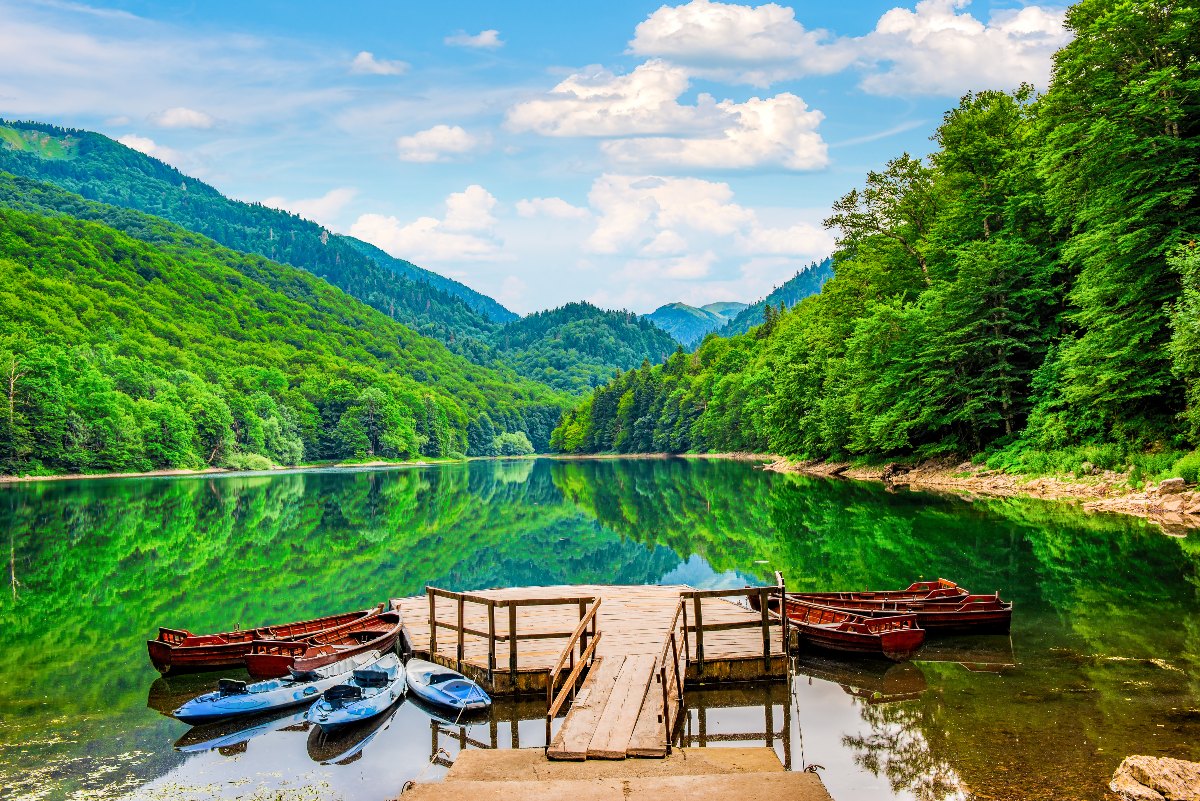 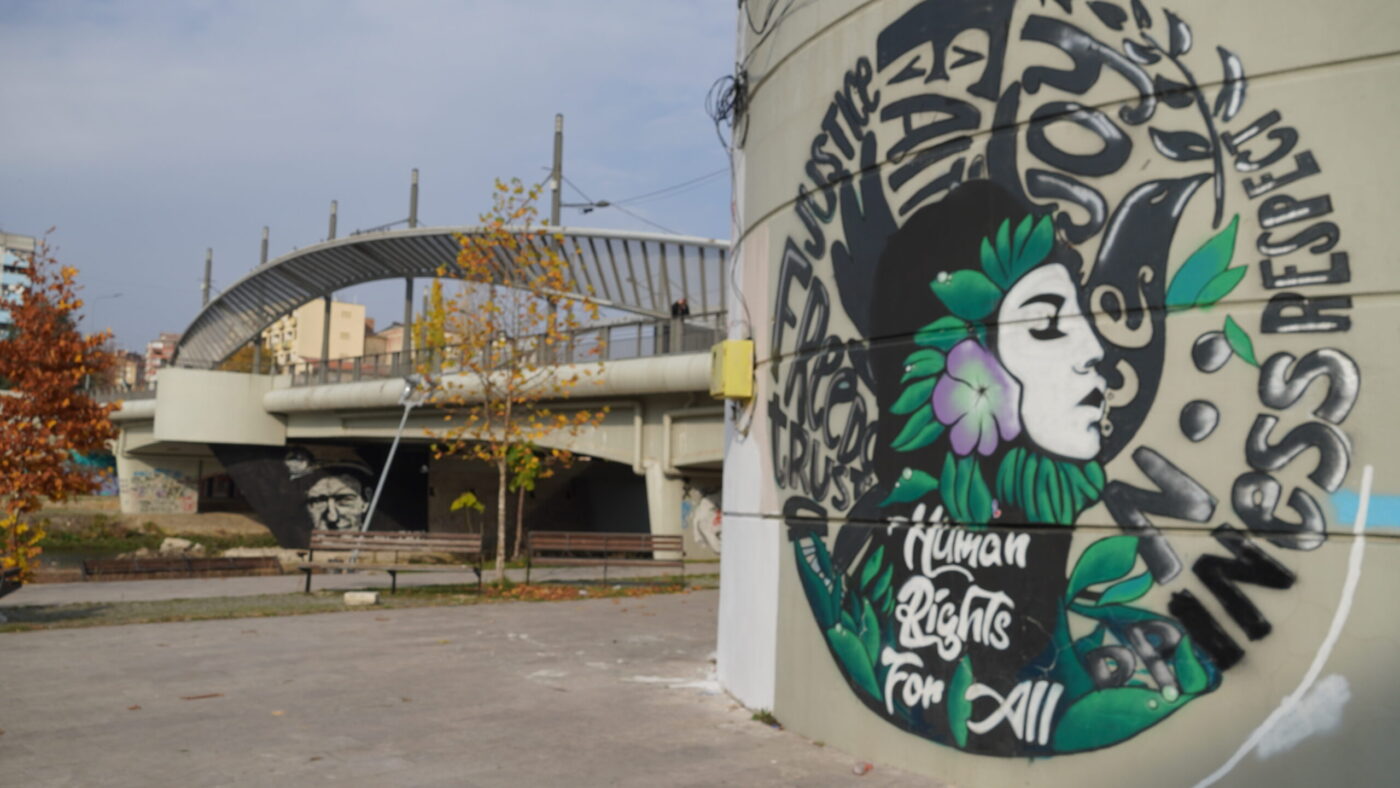 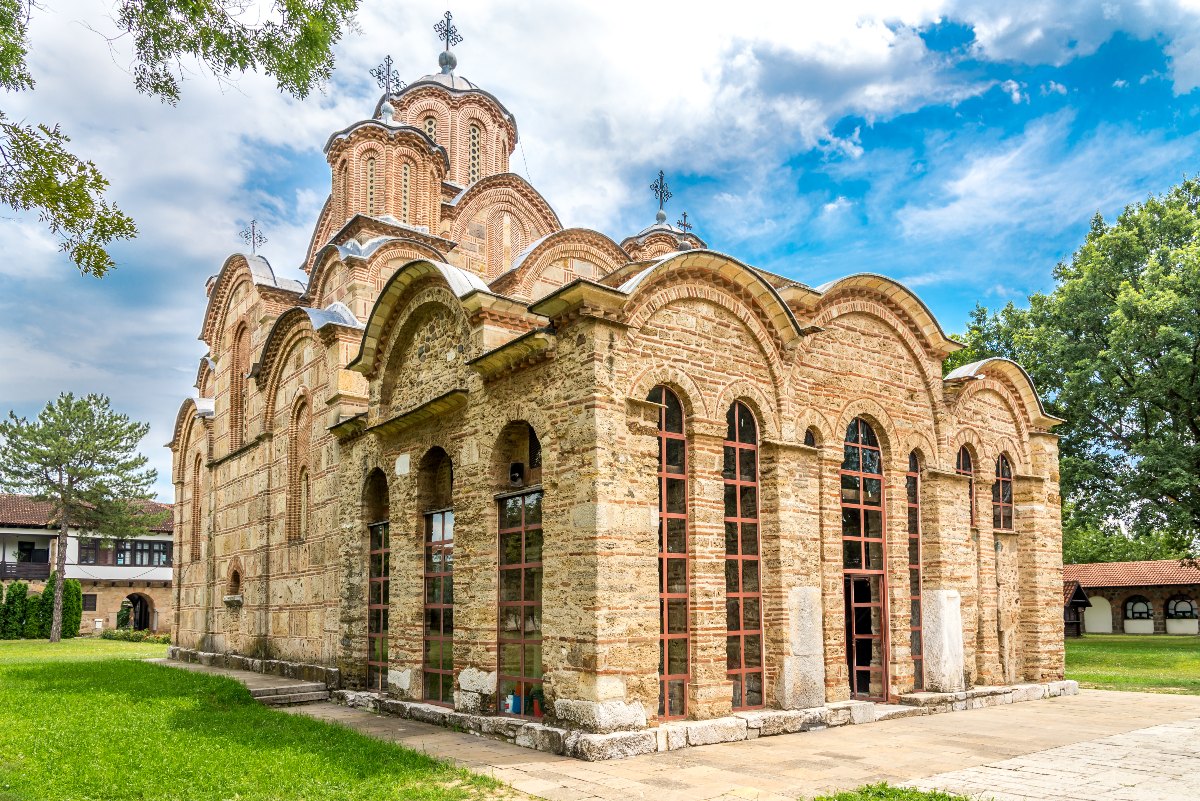 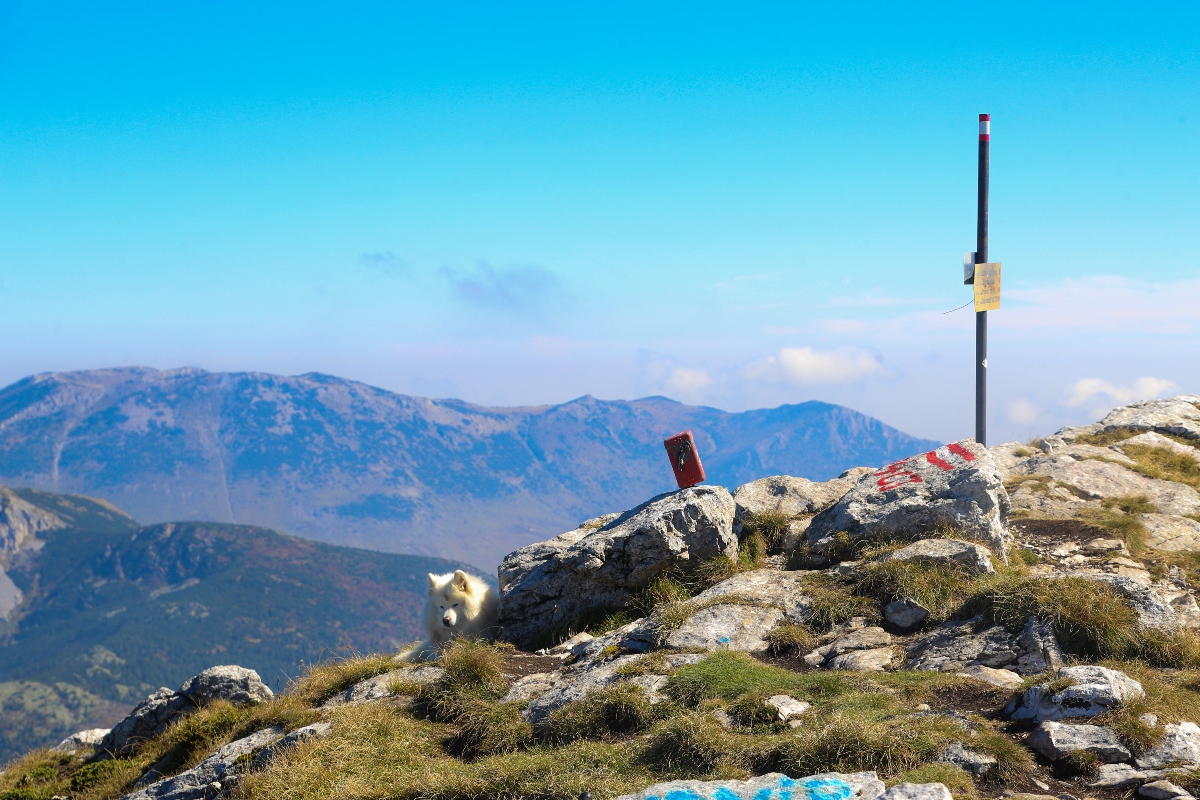