Story of Hazim Numanagic, Man behind the Amazing Calligraphy Works of the Unique Bey’s Mosque

Calligraphy (Greek kaligraphia, from kalos = beautiful and graphein = to write) is the art of beautiful handwriting with the help of a pen, brush, ink or some other writing utensil. Each civilization had its own calligraphy and some of the most known are the Arabic, Ottoman-Turkish, Chinese and Japanese calligraphy.

Wherever the transcription of sacred texts in history had in itself a spiritual value the importance of calligraphy was enormous. However, even more important than readability is achieving a perfect aesthetic balance and showing the emotion which is exactly what makes this craft an art. Many calligraphers still point to the meditative character of their work where peace that fills their whole being with a complete satisfaction makes the time and space completely irrelevant.

Although calligraphy has significantly lost its importance in Europe after the beginning of the new era, it still lives on as an art form. Its purest and most beautiful form you will find in a charming studio of Hazim Numanagic, a man who opened his door to all of the curious and eager for purest art eyes and souls. This serene small gallery, shop and working place is peacefully nested in a silent street only steps away from the hustle and bustle of the old town of Sarajevo – Bascarsija.

Hazim Numanagic exudes the art which has deeply permeated his entire studio and spread to anyone stepping inside. That is to say, in over 20 years of its existence, this place represents a perfect refugee for any art lover, leaving no one indifferent.

Although there used to be many of them in BiH, the last calligraphy workshop died out at the beginning of the 20th century making the Husni Hatt (ar. Beautiful letter) in Sarajevo the only workshop of its kind in Bosnia and Herzegovina and wider.

Hazim Numanagic was born in 1960. in Fojnica. He learned the first steps in mastering calligraphy from his father Ibrahim. While studying Oriental Studies in Sarajevo Hazim met the best calligrapher in the former Yugoslavia, Ešref Kovačević, with whom he continued to study this fine art. “He complimented my work in such a way that it prompted me to conclude the calligraphy is indeed the path I want to take.”says Hazim with a warm smile evoked by this recollection. It seems that his life starts with that sentence.

“Our country is truly admirable and most important thing is to keep the tradition alive and return calligraphy to the pedestal that has belonged to it for centuries in Bosnia. ”

Hazim’s teacher, Esref Kovacevic learned calligraphy from Hussein ef. Rizvić, this one from Behaj ef. Sikirić, and he from his father Shakir effendi Sikirić, who is Hazim’s great-grandfather. This way, Hazim explains, the circle brings him back to his family roots and the chain of, not Turkish or Arabic, but Bosnian transmitters of calligraphy. This is why Hazim opened his studio in the first place, to keep the Bosnian tradition alive and give the modern world a way of understanding something that can not be explained by any means of modern technology – spiritualism which is deeply nested in the roots of calligraphy art.

In 1991, together with Professor Kovačević, Hazim exhibited his works for the first time and he set up his first solo exhibition in Sarajevo in 1996. In 1997, he participated in the First World Calligraphy Festival in Tehran, where out of 1,100 calligraphers from all over the world, only 400 were accepted to exhibit their works. Among those four hundred calligraphers was Hazim Numanagić, with his two levs. From then until today, Numanagić has had several individual and joint exhibitions in the country and abroad.

Right upon entering Hazim’s studio it is impossible to resist the symphony of tradition evoked by Hazim’s melancholic voice and the perfect calligraphic works that easily bring us back to origins of our beings, to what we come from, to the spiritual from which we are woven. If any of us has forgotten the pursuit of inner peace and balance, the very sight of Hazim’s works will remind us.

Extremely modestly, Hazim talks about the renovation of the Bey’s mosque as just one of the projects in which he participated. The Bey’s Mosque, the divine temple that is impossible to miss as soon as you step into Sarajevo, has gained back its splendour thanks to Hazim Numanagic. After the war a completely new interior was designed and applied by him, modelled on the design of the 15th and 16th centuries. Austro-Hungarian decoration, performed mostly in pseudo-Moorish style, remained only on the portal of the Mosque today.

Moreover, it is important to mention that Hazim’s work received significant attention in the book Traditional Arts And Crafts In Bosnia And Herzegovina published by UNESCO in 2005.

Secret of creating calligraphic art lays in combination of spiritualism, patience, old recipes and respect towards the tradition.

Hazim’s basic tool is a reed qalam – a type of pen made from a cut, dried reed. Hazim makes his own qalam as well as doing all the paper preparation work. The paper is dyed with natural dyes of plant origin using different techniques, then a writing pad is prepared, usually with coatings of egg whites. The paper prepared in this way stays for at least six months and only then is it used for writing after ironing. This way, you can be sure that, once Hazim’s work enters your home, it will certainly stay there as a faithful friend for many centuries and many, many future generations to come.

There are calligraphic rules in Arabic calligraphy, each harp must be of exact length, it is specified to the maximum and limited. However, he sometimes intentionally leaves fractures and strokes of the pen which look absolutely beautiful and give depth and dimension to his art. If you find the strength to interrupt for a moment Hazim’s melodious voice that takes you deep into the history of creation and primordial,  stand up and look around the small gallery.  You will find yourselves in a whirlwind of colors while your being is touching all the symbols and meanings you have ever questioned or simply forgot to question.

Although we may not immediately understand the letters that Hazim lovingly writes with the strokes of a master who will forever go down in history, we will very easily find ourselves entering a world of a broader picture that imposes the thought that the search never stops, and that meaning is always hidden in deep corners of our perceptions. In fact, that is the goal of art, and Hazim’s calligraphy certainly is.

Despite calligraphy in BiH was created with the advent of Islam, and in Islamic art it replaced what was provided by figuration in other cultures and arts, Hazim does not necessarily base his works on religion. His work usually depends on what the client is looking for or what he finds inspiration in. Prices of Hazim’s work vary depending on the complexity of the composition and time he spends while creating his art. Thus, you can ask Hazim for a work on which your name will be written, or verses that are important to you. Almost whatever you find important, Hazim will make a way and make it into art with his fluid motions across the paper.

Apart from Arabic, Hazim also creates his art in Bosancica, Arabica and Latin. Whatever the letter is, Hazim will teach you about the beautiful and some broader, deeper meaning we may have forgotten. Of course, if the road takes you to Sarajevo, be sure to visit the quiet Despiceva Street and talk to him. His warm and unyielding welcome will make you feel less of a stranger and more of a friend as soon as you enter. 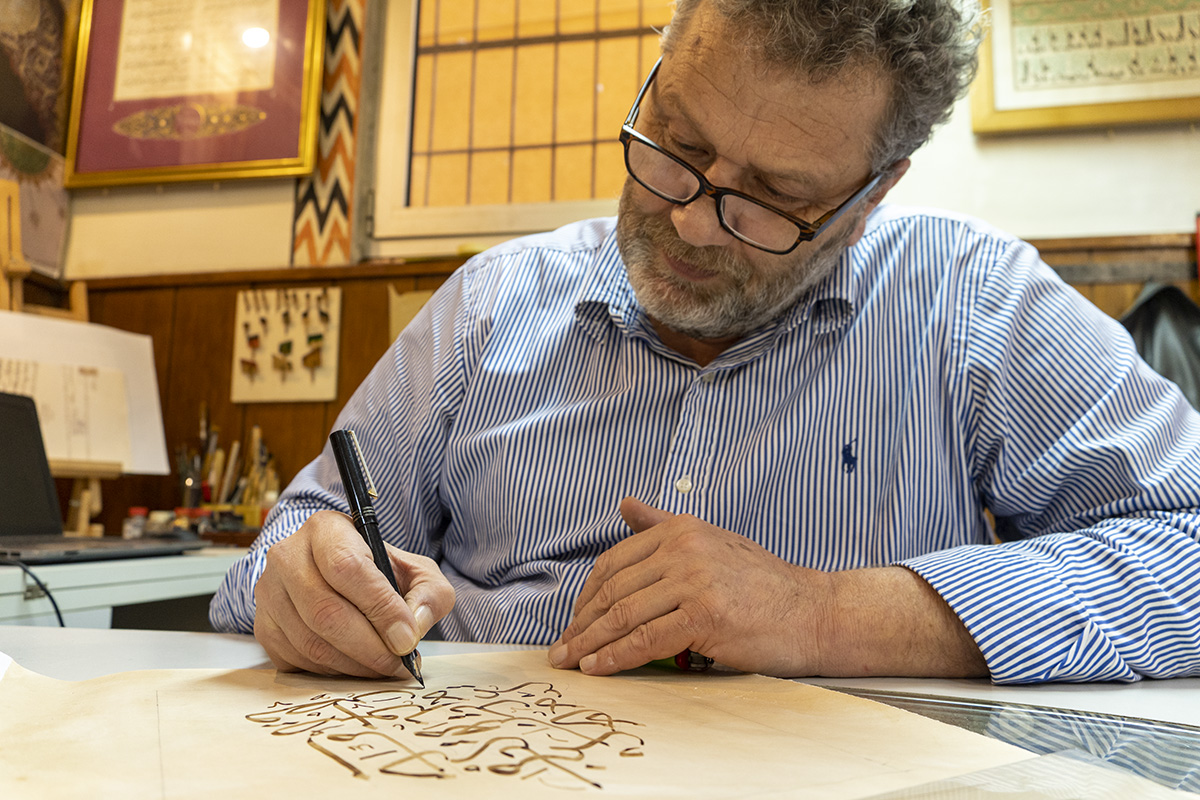 For more complex works, Hazim sometimes spends months of intensive work. Yet, as Hazim states, this is the kind of work that produces positive fatigue, a fatigue in which you give the world a deeper meaning every day and remind it of its original purpose.

Read more of our Articles