“Around the beauty there are always either the darkness of human destiny or the shine of human blood.” Ivo Andric

It is hard to admit how much little do we know about the place we live in and how much the people we may claim to know are actually strangers to us. When we started this project on promoting rural tourism we knew one thing for sure, we will be telling unbiased stories about our neighbourhood. It was a noble goal which was supposed to, now that given the pandemic circumstances we have some spare time, help to those in need. The need we saw was unlike any of those we were used to while living in the modern world. It was the one you are safe and protected from by modern needs of everyday life just by accidental luck of living in a capital.

In order to introduce the reason to visit such a small village that is completely off the beaten path offering very few tourist attractions, it is necessary to strip the roles of ambassadors exposing ourselves only as human beings.

Zepa is a small village surrounded by dense forest and if you thought you know what bad road means, you definitely haven’t visited this place. Zepa is a proof that not all roads lead to Rome. There is this one, challenging road. Slick and narrow, it will try to outbrave you. With its deep gullies and huge rocks to avoid, which I can’t really tell where these came from, this road will challenge your decision and force you to think twice. Guess its cause it seems that nature, based on the past, has decided Zepa should rather remain forgotten than left to human kind. However, things that we put most effort in are usually those that are the worthiest in our lives. So is this East Bosnia hidden gem.

Not a lot of people in the world heard about East Bosnia  in general. But those who did they most likely visited Srebrenica and Visegrad either as a day trip or conveniently connecting Sarajevo and Belgrade. Žepa is a village that symbolises solitude and silence. Being without adequate roads, shops or even hospitals and doctors, this village is completely cut off by lacking even one regular public bus line. As a result, about 150 to 160 inhabitants who live in several surrounding villages and hamlets are forced to find their way and reach some of the bigger towns even for the simplest needs such as groceries.

So, why should you even dare to think about visiting this village during your holidays once you finally give a chance to Bosnia in general? Because Zepa is a living proof and school example of what happens when nature at its purest form conflicts with the saddest and most disappointing nature of humans. Zepa is a proof we might have to rethink the phrase “human nature” as nature at its finest has nothing to do with humans.

While approaching Zepa a picturesque valley surrounded by massive mountains on all sides absolutely astonished us. It is impossible not to take a moment to get out of the car and memorise this picture. It is one of the rare moments where you actually completely forget to take the picture by camera. You rather take this picture and place it deeply into hidden corners of your mind. Corners where oblivion has never put its foot on.

So very few locals you can see here. On the other hand you will notice some shy and tired smiling faces as soon as you enter the village. “Don’t forget us” is the sentence they use instead of “goodbye” . We heard it so many times that it stuck in my brain forever. I don’t think I will ever be able to forget the simplicity, gratefulness and sceneries of persistent nature rising above the war destructions I experienced that day. 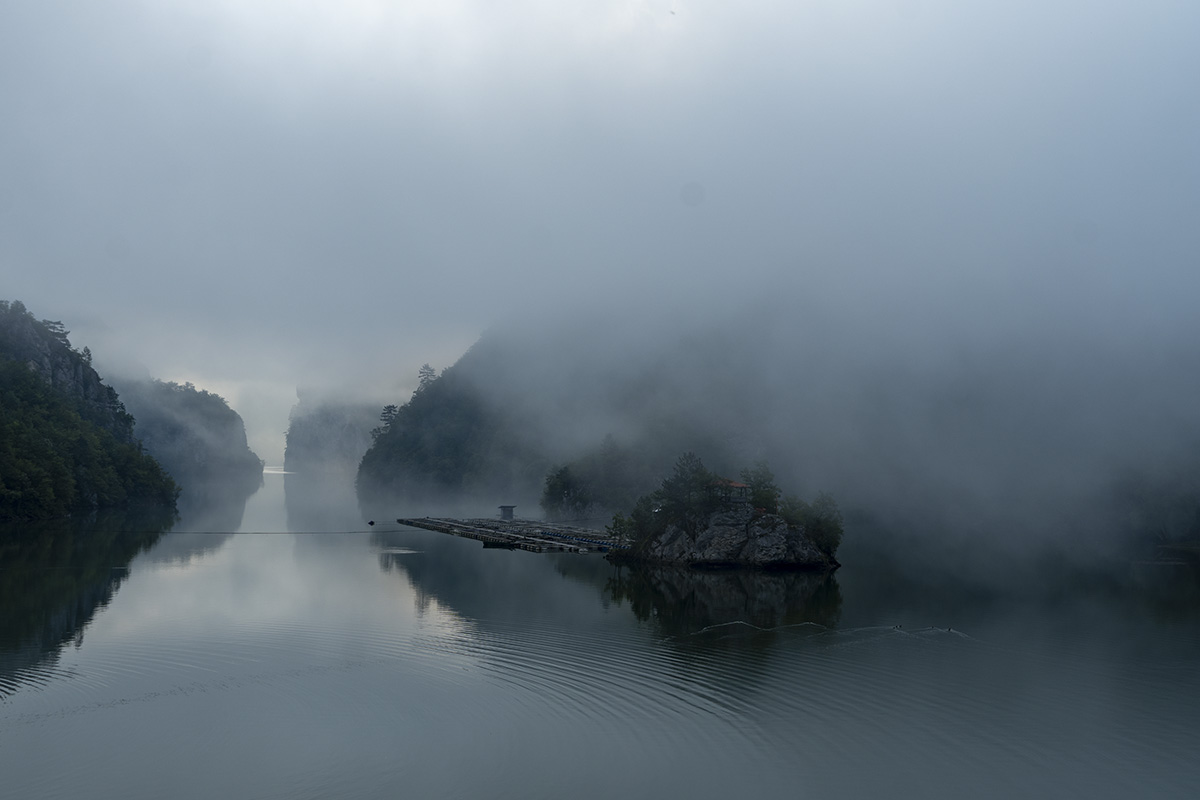 Eastern part of the village is located at the beautiful shore of Drina Lake which allows the water connection with the neighbouring towns. Tourism here is only in the form of observing the distanced boats “floating” from Višegrad to Bajina Bašta through the Drina Canyon, where the blue, tamed river flows.

So what happened with Zepa?

“Removing [Zepa’s] civilian population, destroying their homes and their mosque, and killing three of their most prominent leaders, was done with the purpose of ensuring that the Bosnian Muslim population of this enclave could not be able to reconstitute itself. They were killed with the intention to destroy this population,” Hag’s Tribunal first Verdict on Zdravko Tolimir’s first trial.

Zepa was one of three Bosniak enclaves in eastern Bosnia surrounded by the Army of the Republika Srpska (VRS), along with Srebrenica and Goražde. Zepa was the smaller and more isolated Bosniak enclave which was nested in a deep, thickly-forested gorge. In 1993, the town was declared a United Nations safe area and had a small Ukrainian Armyunit of UNPROFOR peacekeepers stationed there. The town was captured by the VRS on 25th of July 1995, so just few days after the fall of Srebrenica but, contrary to Srebrenica, a widespread slaughter of Bosniak men did not occur, as most Bosniak fighters had fled the enclave by the time Bosnian Serb forces arrived. Meanwhile, Bosniak women, children and the elderly were evacuated to Sarajevo that day.

Only in 2003, people from the area of Zepa came back to their pre-war homes and only thanks to the support of charitable organisations which have rebuilt their houses, and SFOR, who have moved their belongings.

The women and children were terrified, shrieking whenever a Serb jeep would speed by with its flag resplendent. As instructed by the UN refugee agency, I dutifully began asking the women if they were leaving of their own volition. By rote, each mother nodded her head, except for one who stated: “No, I want to stay in my home, but who will protect me?” With that, the woman burst into tears, along with the rest. I immediately ceased the pointless questioning. Edward P. Joseph

“If people would know how little brain is ruling the world, they would die of fear.” Ivo Andric

Reasons why you should visit East Bosnia and Zepa

Visit the Bridge on River Zepa.
Did you know that the very Ivo Andric wrote about the Bridge at Zepa? The entire story is actually named after it and, if you already decided to visit Bosnia and Herzegovina, you must have stumbled on the Nobel winning author Ivo Andric. If you haven’t yet, then you should. The Balkans are hard to understand. But the knowledge you get from even a simple try of understanding is irreplaceable.

Ivo Andric is a man who will help you want to understand. For this purpose, the first thing you need to do while in Zepa is visit the famous Bridge on the river Zepa. No worries for not having a chance to read the story written by Ivo Andric. Bridge will make you want to read it. This small masterpiece of the bridge is connected with the building of the famous Mehmed-Pasha Sokolović’s Bridge in Višegrad (in the 16th century). It was originally built near the confluence of the Zepa with the Drina, in a narrow gorge. Later on, the construction of HPP Bajina Bašta endangered the bridge, so it was dismantled and reconstructed at another location, a few kilometres upstream. It was proclaimed as a national monument in 2005. Despite the new location, the bridge lost none of its authenticity. Moreover, it was preserved in its original condition and beauty.

The story of Ivo Andric covers the construction of the bridge you can see in the photo. The two main characters of the story: Vizier Yusuf who ordered the construction and the Italian architect who was in charge of work both end tragically as, despite the human effort there is always an inability to reach the final goal even if the direction in which it goes is extremely ethical. Silence is the only safe shelter which, in this case, is represented by the bridge and its “silent” stones.

Regardless the story, the fact about Zepa Bridge is that there are no information in old records and travelogues about its constructor or even the time of construction. There is also no board on the bridge with text that would offer precise information about its origin. However, judging by the boldness of the construction, the constructor had to pass the greatest schools and master the architectural art of his time at the highest level. In addition to the Old Bridge in Mostar and the Bridge in Visegrad, the Bridge on the River Zepa is definitely the third most famous bridge in BiH.

Explore the amazing Drina River Canyon, an absolute piece of sacred heaven. Four of us from the team and one inflatable boat was absolutely enough for a perfect day. Add a barbecue here, just to put a cherry on top. We have started from the “Slap” restaurant and explored the canyon in depth. There was no rule on where to go and all the small deep, rocky and steep sides took us to alluring hidden shores where you could witness the purest nature and had to actually wonder ourselves are we even allowed to be at such a bewitching piece of heavenly untouched nature. 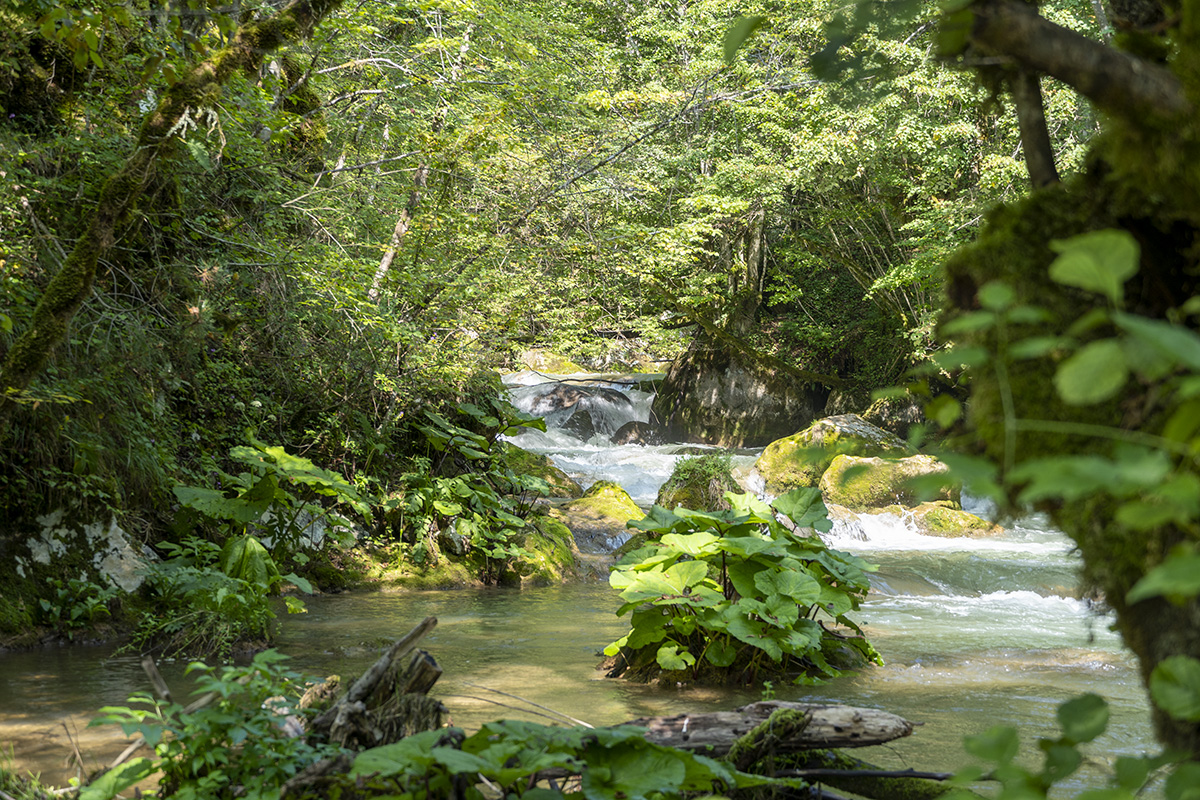 Exploring the flawless nature of Drina Canyon makes you wander if human beings are even allowed to there.

The raw and barren beauty of shores with plants growing in every which way, leaving minimal room for the path itself while the trees and saplings lined the sides. It was a perfect setting for swimming and time for a typical Bosnian barbecue lunch. Impossible to resist the noble walls carved by nature, sandstone flanks, tunneled wind and river winding in a dusty bed fringed by green trees, red cliffs and arid grandeur. 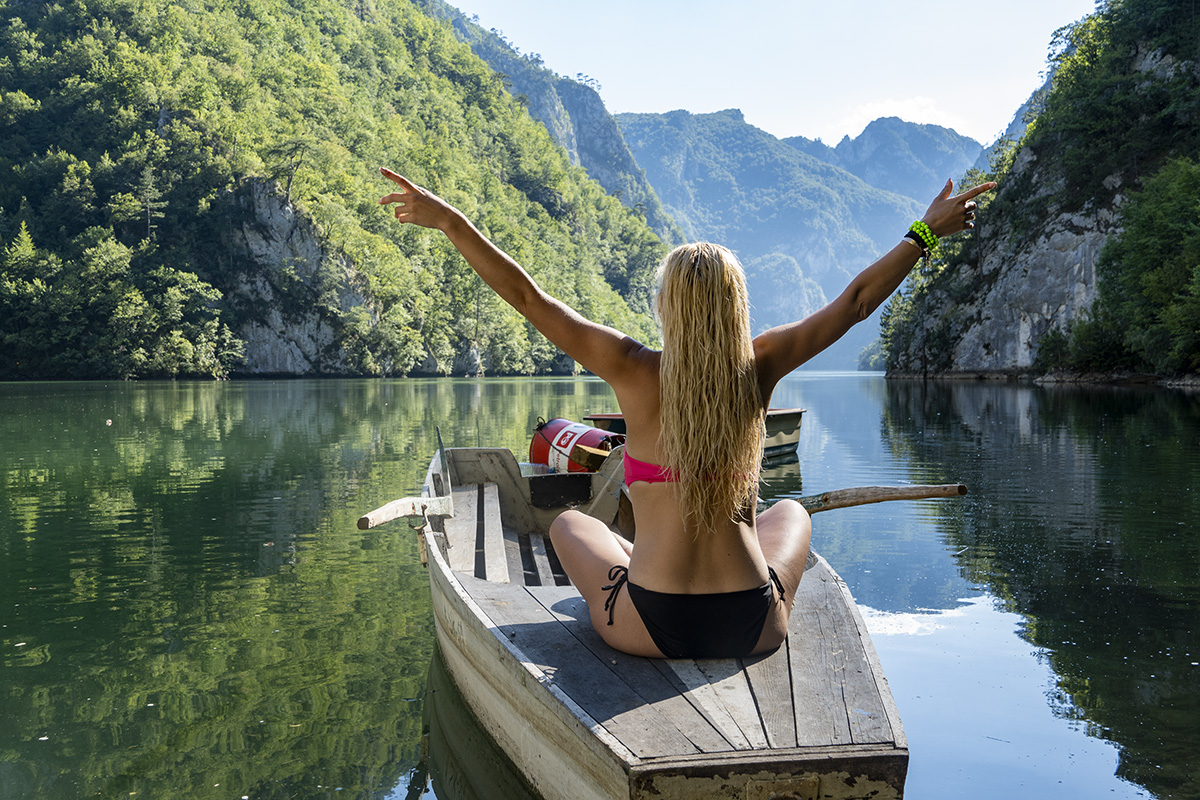 Drina River Canyon is a shelter of pure nature and, whether you are into fishing, sailing, swimming or simply enjoying absolutely serene moments only nature can provide, we assure you that this is just a perfect place to be at your own pace.

Spend a night in a motel next to the river. Who would even dare to spend a night in Zepa other than locals? What is the best way to experience the place during your holiday? Listen to the words of locals…  Here you have our warmest recommendations. Spending a night at Motel “Cesko” which is placed just next to the Drina River will provide one of the most comfortable and comforting sleeps you could possibly have. In echo to the soulful blues song, the river will become a sanctuary of your dreams.

Try to open your eyes early in the morning, during the sunrise breaking its way through a dense, dove-white mist early morning mist. After you bless your inner self with complete peace, have an early lunch at restaurant “Slap” and try some tasty farm raised fish as Drina river is known to be a fisherman paradise.

Small number of local people here have found their way to live in Zepa nowadays. Hoping for a better future, fully accepting the past but hardly resisting to deny that the present should be the way it currently is. Wander through the village, visit the old mosque and medieval town of Vratar which, originally, Zepa was a part of. Move slowly, pick some mushrooms and smell the colours of flowers, admire the wild life you are freely participating in, memorise the innocent smile on a child’s face and hear the stories of the real local people. Zepa will give you a throw back to the life origins and its deeper meaning. 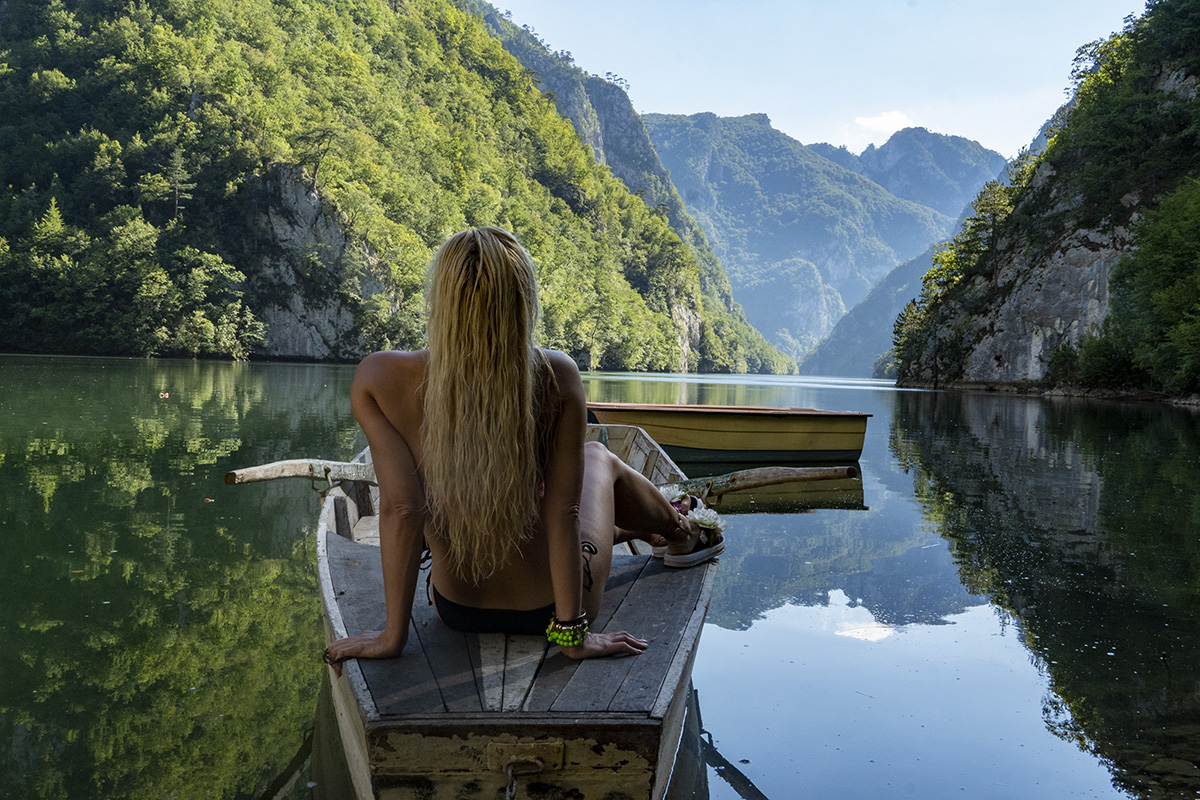 Smile and listen, learn about forgiveness and never forget.
It’s all about the nature of people and their relationship with nature at its purest form in the end.