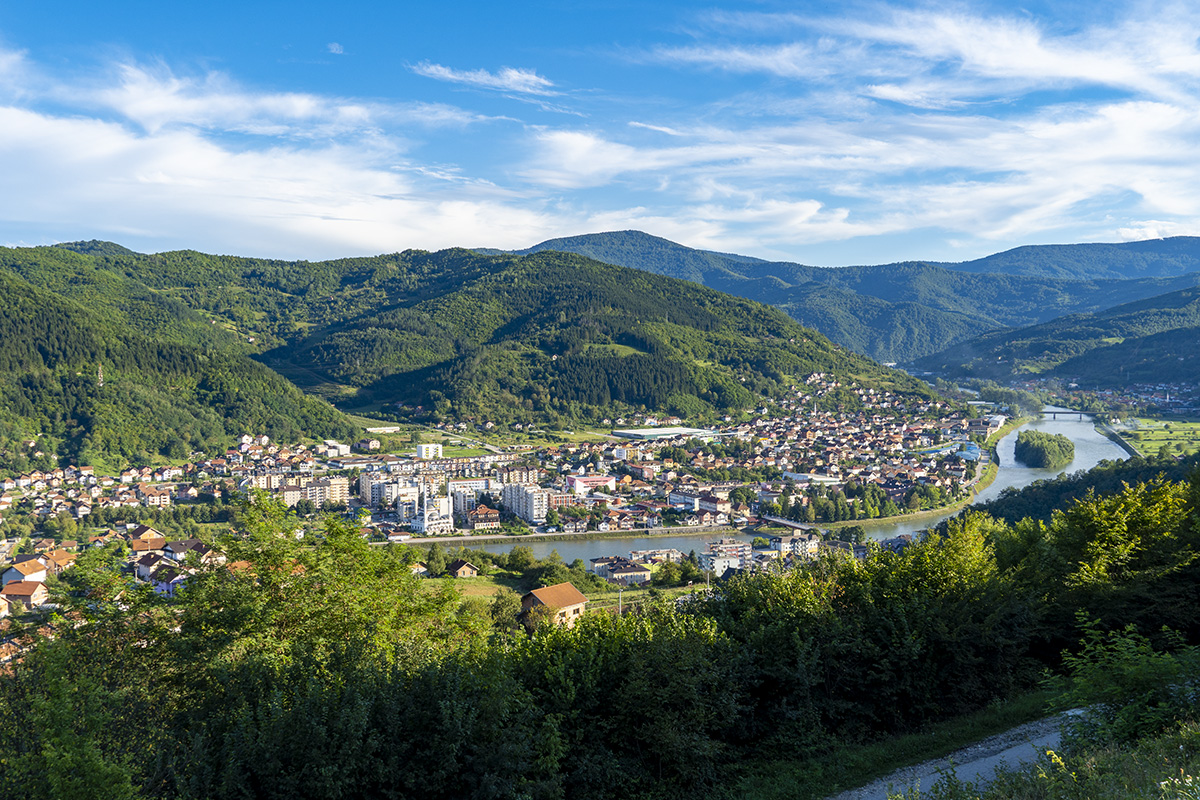 Picturesque Goražde is defined by the splendid and notorious Drina river. Photo includes the majority of the town’s urban area, river island, and the Drina itself. It was taken at the memorial-picnic place park of Rorovi, overlooking the town. From this very place, the Serb forces shelled the town for the first period of the war.

The Drina River an Untapped Beauty

The Drina river is 346 km long and along the river many cities in Bosnia & Herzegovina and Serbia were founded. The bare start of the river Drina is in the place of “Šćepan Polje”. That is the place where two rivers Piva and Tara meet each other. Drina further flows to the north and ends in Sava river. The Drina canyon after the Colorado Canyon in USA and Tara Canyon in Montenegro is the third deepest canyon in the world. Main streams of the Drina river, on the left side are Sutjeska, Prača and Janja and on the right side Ćehotina, Lim, Jadar, Žepa and Rzav. In Bosnia and Herzegovina the Drina valley is divided into “Upper Drina Valley”, “Middle Drina Valley” and “Lower Drina Valley”. Main cities of “Upper Drina Valley” are Foča, Goražde and Višegrad. “Middle Drina Valley” also has three main cities and those are Bratunac, Srebrenica and Zvornik. The most important city of “Lower Drina Valley” is Bijeljina. The Drina river is not just inhabiting its surrounding area, but also it is a river that produces huge amounts of electric energy. Three hydro plants are built on the Drina river, those are Višegrad, Bajina Bašta and Zvornik.

The Drina river was used even by Austro – Hungarians to transport the boulders further to the north. The Ottomans made fascinating bridges over the Drina river, and the bridge of “Mehmed Pasha Sokolović” is the most famous one.  The border between two great empires was actually the Drina river. The East and West Roman empire was divided by the Drina river, being in that way the crossroad of civilisations.

The “Informal Group of Young People” Goražde knew all of these facts and more. Therefore, they decided to make the Drina river great again. 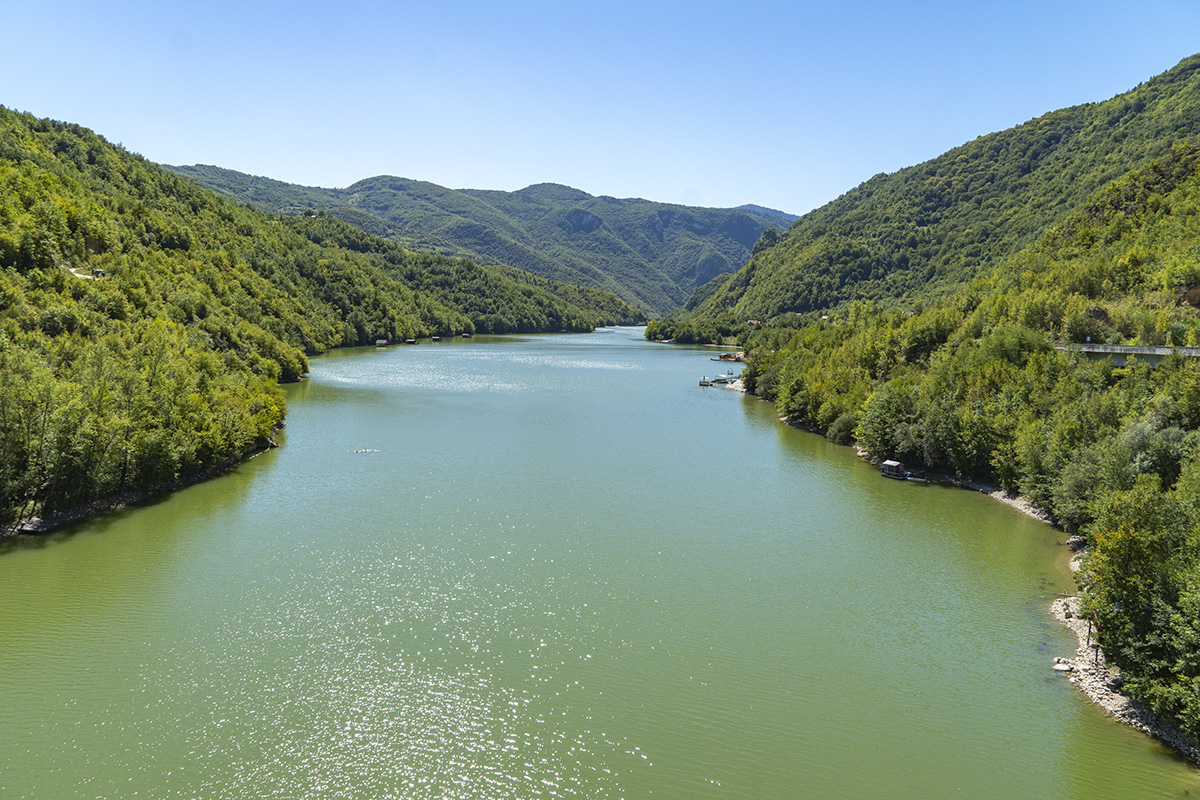 Raw fascinating elegance of the Drina river, just outside of the Goražde town. Since 1989. the river turns into the dammed lake at this very place. If we leave aside the everlasting question ever since: “whether this was a justified government decision?”, we can stand in awe in front of this sight. Just like Robert De Niro did back in 1967. The Drina on its 346 km long course mostly flows through the inaccessible topography. Due to that, three hydropower plants were built on the course of the river, leaving beautiful artificial lakes behind. This very lake, simply named Drina lake, offers multiple choices of drifting, boating, swimming, fly-fishing, basically drenching in a diversity of options and choices.

”Eco regatta Goražde” and the Movement of the Youth

Goražde as a smaller city is pretty alive and developed compared to the rest of the cities in “Upper Drina Valley”. Even so, the youth of Goražde was not satisfied with the events that the city is offering. The younger generations wanted to change the image of the city and make it more clean and eco friendly. Therefore, they organised themself as the “Informal Group of Young People” to do more for their city. Their idea of the “Eco regatta Goražde” was twice denied, but they were determined to “put into action” the Drina river. The third time was their lucky time to apply for the project. The “Foundation Mosaic” approved their project and money through the “Youth Bank” of Goražde. The “Eco regatta Goražde” was not the only event that the “Informal Group of Young People” organised. The summer cinema was revitalized again for the movies and theatrical performances.

The “Eco Regatta Goražde” has two main goals. First goal is to point out the tourism potential and the second to make out of Goražde an eco friendly city. Before the regatta started the organizers cleaned the coast of the Drina river in the city area. It was a move to show to the people that they need to take care of the river. The same was done during the regatta while they were going downstream.

The participants of the “Eco Regatta Goražde” were from all around Bosnia & Herzegovina, some of them were from Dubrovnik and one girl from Iceland. About 15 boats and about 100 participants were on the “Eco Regatta Goražde”, floating downstream about 20 km. Startpoint was the municipality of Ustikolina with the stop in the village of Tišine for a barbecue party. After that the regatta continued to Goražde to the endpoint.

“Informal Group of Young People” is continuing their fight for green Goražde. They cleaned about 700 m² of a wild landfill and made out of it a beautiful park with trees, benches and flowers. 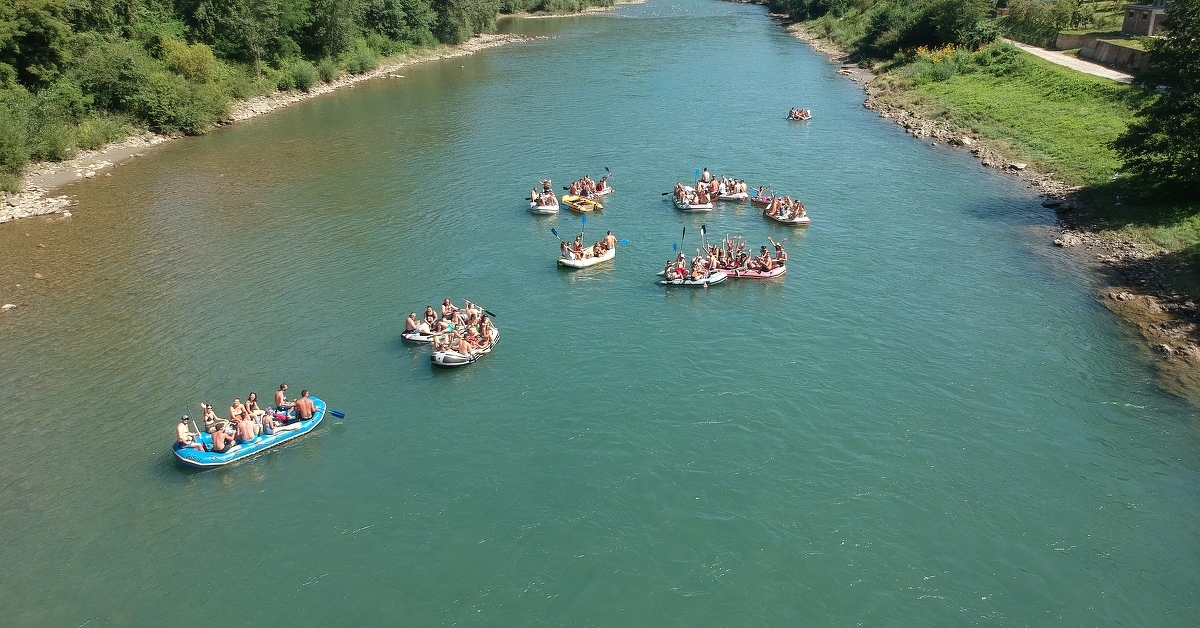 The first “Eco regatta Goražde” was in summer last year. And thanks to The “Informal Group of Young People” Goražde the Drina river is green and clean again.

After the first “Eco regatta Goražde” ended up in the best possible way, the positive impressions started to spread around “Upper Drina Valley” and even further. Youth from Goražde and Foča already made some meetings to improve the “Eco regatta Goražde”. They made conclusions to make the regatta longer and with more people. It is not just a big step for tourism, but also for the reconciliation in the post war Bosnia & Herzegovina. The “Informal Group of Young People” Goražde hopes that in the future this regatta will go in the direction of Foča – Goražde – Višegrad. It is an opportunity for Bosnian Serbs from Foča and Višegrad to build relationships with Bosniaks from Goražde. The youth wants changes, they want to talk about tourism, culture and ecology. As the young generations say it is enough to talk about war and division.

With the other activities like fishing, mountain biking and cultural contents, “Eco regatta Goražde” will attract tourists and convince them to stay longer in Goražde. The Drina river has 38 different fish types, like the carp, trout, perch, catfish, maple, zander and many others. Mountain biking is another must do activity in Goražde. “Association for the promotion and development of mountain biking – Natureriders” exists in Goražde and they promote healthy life and ecology. The landscape of Bosnia & Herzegovina is perfect for mountain biking with all the mountains, canyons, rivers, forests and many others. The cultural content relies on the museum named “Zavičajni Muzej” and its war setting that represents the life of Goražde during the siege. The “Festival Prijateljstva” (Eng. Festival of Friendship) is another cultural event when Goražde hosts hundreds of people, mostly youth. Workshops, summer cinema and all other activities for people aged from 7 to 77. 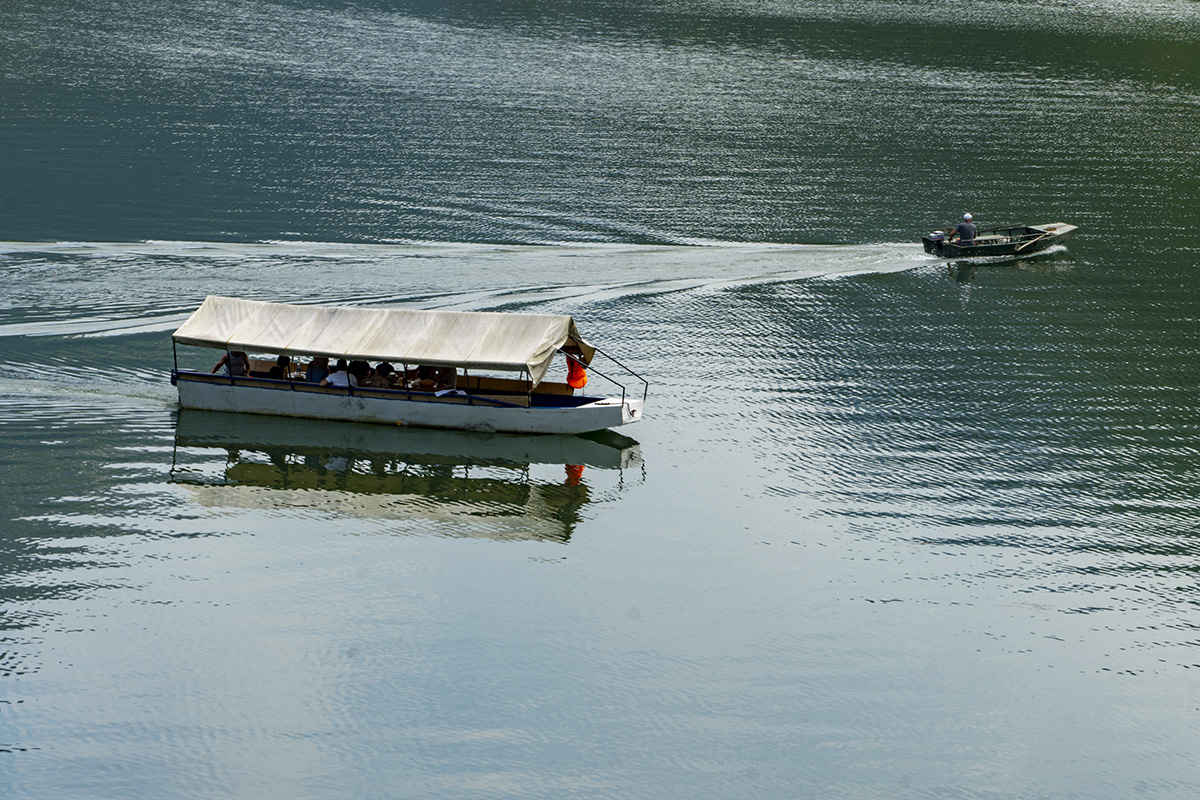 "Eco Regata Gorazde" gave a new meaning to Drina River which became a sanctuary of dreams for a better future of Gorazde and its youth.

The “Festival Prijateljstva” was founded in 1998. thanks to the cooperation of the cities of Saint – Brieuc (Brittany) and Goražde. The relations between France and Goražde dates from the war period 1992 – 1995. Still today the fastival exists and mostly thanks to the help of the French city Saint – Brieuc (Brittany). The festival is based on pop – rock and folk music and it is gathering the artists from both Bosnian – Herzegovinian entities (Federation of B&H and Srpska Republic). After the Bosnian – Herzegovinian war, the festival had the goal to gather people and promote reconciliation. In that way the festival was growing and it startet do bring hundreds of kids from all around the region.

Except for the music, the festival also gathers painters, actors and youth that are active with the workshops. The summer cinema is one of the interesting things at the festival. Unfortunately for the last few years it was in bad condition, but the “Informal Group of Young People” restored the place. Except for movie projections, the summer cinema is used for the theater, mostly for kids.

The “Zavičajni Muzej” is a museum with the war installation during the siege of Goražde 1992. – 1995. It is an important story for the children to learn that war and hate is not good to anyone. The installation is showing war school diaries, handmade guns, UN aid packages, lanterns and many others from the war period.

Some of the content from the “Festival Prijateljstva” should be always available in Goražde. Therefore, with the “Eco regatta Goražde” it should make a boom in the region. 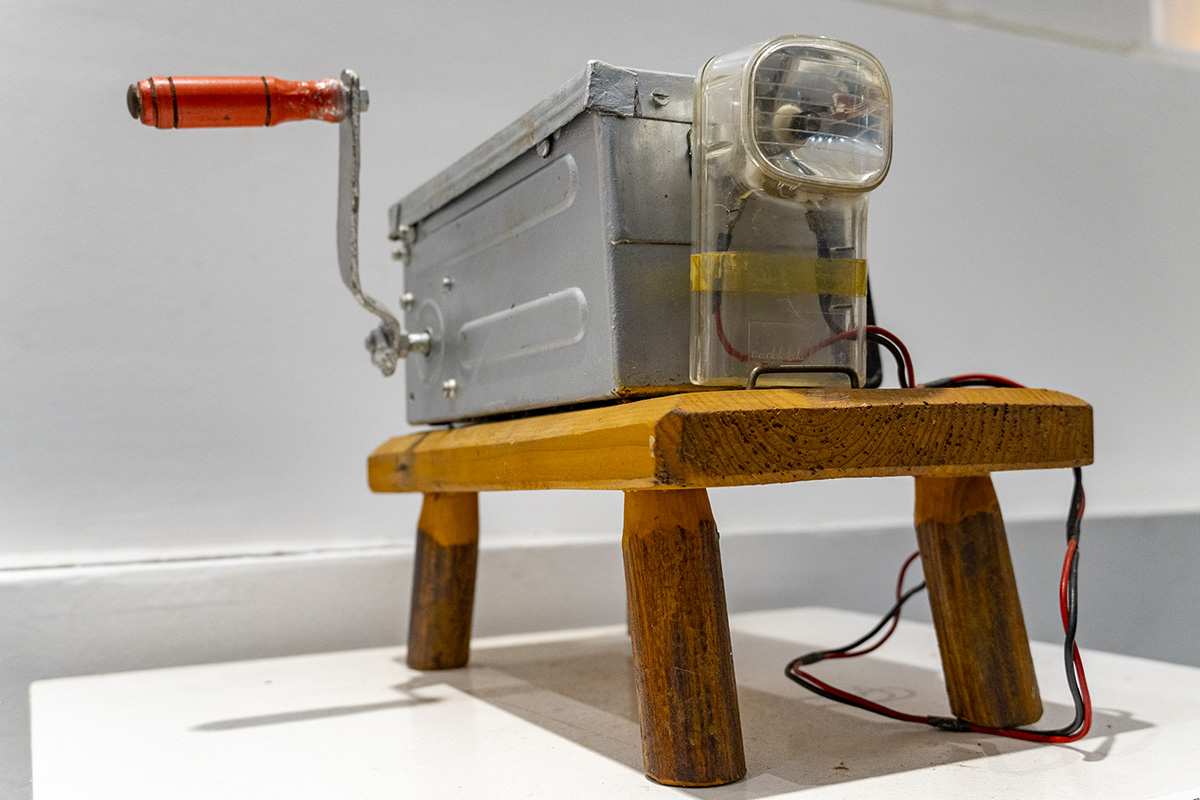 Car battery lamp. Hardships prove that everything has multiple purposes. Similar items were used on a daily basis and providing some semblance of a decent life. 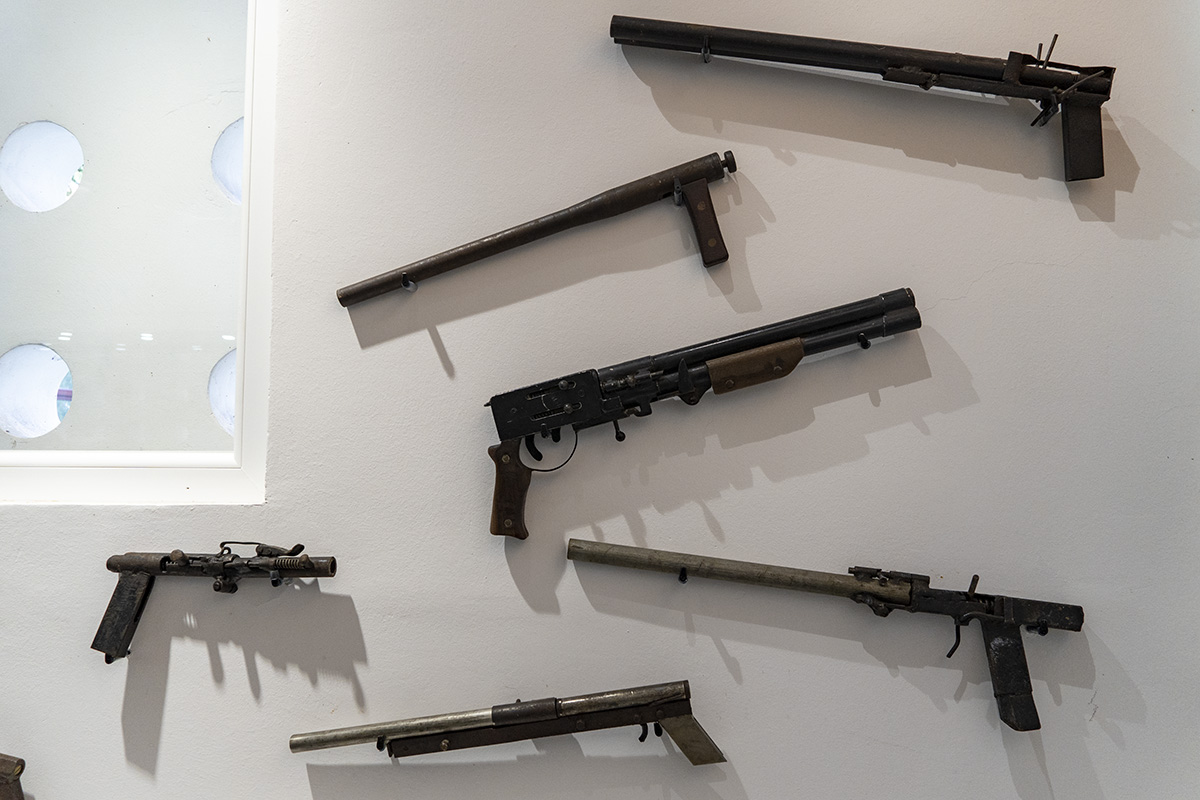 Improvised pipe firearms (locally called “lunta”) permanently exhibited at the Goražde town museum. Local craftsmen contributed immensely to the overall defense during the war, especially at the beginning of it. As my relatives, war veterans used to say, “The noise these arms were making was what scared the enemy more than the lethal characteristic of it”. The war permanent exhibition is an unavoidable part, that curator Adi will guide you through. As the history major, and local who was a boy during the war, you will get to relish his professional unbiased, and first-hand approach.